Bits to Invest on

Hi,
Fairly new to cnc. I just ordered my x-carve and I have a long way to go… But upon buying this equipment I have already conceived what i wanted to do. I want to do furnitures on this like fishbone chairs, smaller items like passive sound amplifiers for smart phones, and I also want to be able to do intricate carvings similar to the iphone case in this link http://www.carved.com/shop/iphone-se/kerby-rosanes-geometric-

Can anyone in the forum guide me by sending me a link(s) to the bits I will need so I can do these projects? I dont want to buy bits that I wont need. I got the dewalt router for my x-carve and also bought the 1/8" precision collet kit for the router as part of my stash.

I want to do furnitures on this like fishbone chairs

For plywood I recommend a down cut bit, they should have them in the router bit section of the hardware store. By pressing down as it cuts it will give you a much cleaner top edge, especially with plywood.
Later on when you get more comfortable with feeds and speed you might want to try a compression bit. But you have to order those and they may require a deeper initial cut (so the down cut portion is cutting the top.)

First… i don’t think you ‘Invest’ in Bits… they are more of something you consume, like food

For ‘BIG’ things like furniture you’ll probably want a standard 1/4" bit. I just use cheap double flute upcuts for plywood and MDF.

The pic you sent was gone however viewing other cases there it looks more like most of their work is laser engrave. I would say some small engravers bits could do this work. 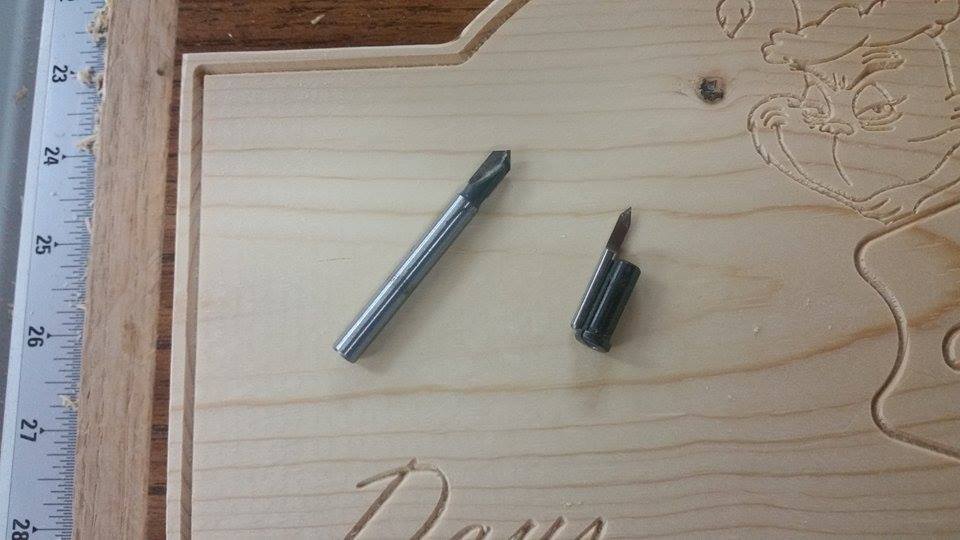 the one on the left is a standard V Bit the one on the right is the small detail engraver I would also say getting some of the Tapered Ball Nose Bits from Tools today could do some intricate small work, I have 1/32", 1/16", 1/8" and 1/4" that set is not cheap and most people used to a $5 bit on Amazon may have heart failure with the price but they are very nice for good detail work.

PWAC like you I fully agree to invest in GOOD bits. No matter how well a project has been designed, it all comes down to how the bit interacts with the material being cut. A cheap bit simply cannot cut as precisely as a precision made bit can. A cheap bit will also cause more chipping and burning, so you either “settle” for a mediocrely cut project, or you have to do it all over again which wastes time and materials (and cost money).

Bits are all made out of metal BUT the type and quality of the metal varies widely between a good bit and a cheap bit. The type of carbide (whether its virgin, first, second or third cut carbide. a chart can be found here; http://www.just-wood-routers.com/router-bits/carbide-grades.html) the different grade of carbide (http://www.carbideprocessors.com/pages/carbide-parts/referencing-carbide-by-grade.html) the degree of sharpening used, the thickness of the carbide, the type of bearings used, the balance of the bit (poor balance adds wear and tear to your router) the concentricity of the bit and bearings etc. etc. all add manufacturing cost to a bit, and if someone is buying a cheap bit (usually found in cheap sets) the person selling it to you has to be making money on it, and they have to buy it from a distributor (which also has to be making money on it) that bit can easily come down to having only $1.50 or less in its production, which obviously can not compare to a precision quality made bit.

Hi, thank you all for the reply. you are all very informative. the reason why i asked in such detail is because I live in the Philippines and though these bits might be found in our hardware stores here, I just need to make sure that I have the right ones to start with, so I can bring them to the stores as sample when I need to uy locally. From where I am, cnc routers are only used by people in the machine shops and getting access to parts would be a bit harder. anyways, I’m used to buying everything online and have them shipped here, but the wait would kill me if I get the wrong bits and will have to order the right ones I need.

I found this bit. https://www.amazon.com/gp/aw/d/B00HD30JI0/ref=ox_sc_act_image_3?ie=UTF8&psc=1&smid=ALZ7MHEFAFVM6
Do you guys think this is a good option for me to start with? it says “two flute”

by this its still a down cut bit right? I plan to use this bit more often because in my opinion, its the right cutting diameter for the “do it all” not so detailed works but thin enough to be economical on the plywood surface area.

How about this one for engraving? https://www.amazon.com/gp/aw/d/B0143AA6NI/ref=ox_sc_act_image_2?ie=UTF8&psc=1&smid=A1THAZDOWP300U
I figured since it is smaller it would do well for envraving on wood and aluminum.

do you think these are good enough for me to start with? Please share your thoughts. I’m just gathering info by reading the forums and item descriptions on Amazon.

While I’m obviously bias I’ll try to give some general information here.

To expand on what @CNC3D said. There is a HUGE range of differences in bit quality and design.

Rake angle
This is the angle of the cutting face (in this case the flute) to the material. For softer materials you usually want a higher angle so you get a good clean cut of the material. However, if this is too high and you want to cut harder materials then you will have too weak an edge. It’s quite common for companies to either shoot for some middle ground or simply sell metal cutters as soft media. An even bigger problem is a tool with negative rake which is quite common in very cheap tools as it’s the easiest type to make.

Flute helix
This is the angle of the twists of the flutes up the tool. Think of it kinda like a screw pitch. This is another one of those things that effects soft and hard materials differently. As an example high helix upcut is more likely to chip out wood. On the other hand you want enough that you are clearing out the cut material to reduce or prevent re-cutting. Again though you often see high helix tooling used for metals with very good results…and sometimes sold as wood cutters with less ideal results.

Other changes in flute geometry, and tip style will also effect your cut but I don’t want to expand this to a crazy degree.

Carbide grade
Also as @CNC3D mentioned carbide quality range is huge. You have the basic size grades (micron / submicron), then breakdown by ISO. However, it goes even further than ISO grade. Let’s use 3 carbide examples in ISO K20:

T.R.S. is transverse rupture strength and HRA is a rockwell A test. Clearly all these carbides are different even though they share the same ISO grade. Just the differences in these 2 properties will absolutely change the tool life, and stress the tool can handle. They will also greatly effect the cost of the blank.

Tolerances
The tolerance allowed on the tool can also have some obvious and subtle effects. I’ll give 2 quick examples.

Diameter
Some of things are obvious like a 6mm (0.2362") tool being sold as a 1/4" tool. Even much smaller diameter changes can have a huge effect on things like engraving and inlay though.

Runout
This is the difference in the size of the flutes from the center of the bit. There’s a few things this effects but I’m going to just discuss wear here. A tool with high runout has a flute that is doing more of the cutting and wearing faster than the other flute. This means your tool is going to start giving you poor cuts faster. Additionally, this will also have an effect on the diameter of the cutter.

Think I’ll leave this here unless someone wants more information. To sum up quickly geometry, base material, and tolerance make huge differences in tool performance, bit life, and unfortunately price.

I found this bit. https://www.amazon.com/gp/aw/d/B00HD30JI0/ref=ox_sc_act_image_3?ie=UTF8&psc=1&smid=ALZ7MHEFAFVM6Do you guys think this is a good option for me to start with? it says “two flute”

How about this one for engraving? https://www.amazon.com/gp/aw/d/B0143AA6NI/ref=ox_sc_act_image_2?ie=UTF8&psc=1&smid=A1THAZDOWP300UI figured since it is smaller it would do well for envraving on wood and aluminum.

These are not engraving tools but drills. Drill bits are not designed to take side load at all. They will also give you a very poor cut if you can keep it from breaking.

Hope that’s at of some help.

Again, obviously I’m bias on tooling so I won’t make specific recommendations. But if there’s anything else I can help with please let me know.

Do you guys think this is a good option for me to start with? it says “two flute”

Personally I would never buy that bit, even to start out with. Each one of those costs only 2.50. Judging from how it’s made you’ll get heat build up and they will dull very quickly. That bit will not last very long, and probably cause more problems than it’s worth. You can get a really good bit for around 15 bucks that will last you for a long time.

Regarding the flutes; a flute is a straight or spiral grove behind the cutting edge that permits the chips to be expelled from the cut.

@JohnTorrez - Excellent post (I have bookmarked your site because of it). Thank you for the info

thank you for the thorough reply…

Some of the bits I’ve purchased from Amazon are:

For most wood projects (including plywood), a good downcut bit would probably be best. In general, you want to use the largest shank and the largest bit you can on your project since they will provide more bit stiffness.