You can get some from McMaster Carr, search for that name on the forums.

For my current one Frost King brush door sweet from home depot, my previous one was cut up in 0.5 inch piece rubber mouse pad

There are some really nice, professional looking versions around, however being the cheapskate that I am, I settled for a simple home-made version.

Two pieces of ply with matching rare earth magnets (one pair sit ‘proud’ and fit into the matching holes on the other piece) and the skirt made out of rubber sheeting which has had strips cut into it. After making the version shown below, I modified it so that every second cut in the rubber, was only half the length. This made the skirt slightly stronger and eliminated any dust leakage.

This base clips on and off in seconds and most importantly, unlike the fibre-based boots, doesn’t obstruct the movement of the router head at all.

It’s not as nice as many of the others I’ve seen, however it works perfectly and cost hardly anything. 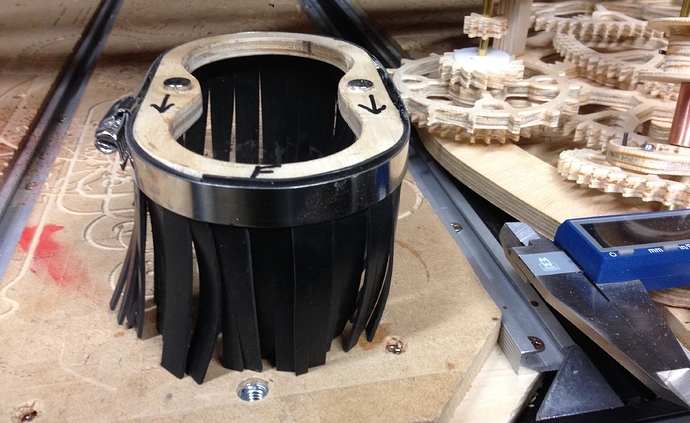 Hi. I like the way you have done it, did you up load the drawing to Easel? ,how do you mount it to the tooling…

@BobMarinoff sorry, this was done in another program (VCarve) but it was such a simple design, I’m not even sure I’ve kept the files (can look if anyone wanted them).

The top half which is exactly the same shape, has a plastic vacuum attachment glued into one hole and the other hole fits over the base of the DeWalt body. It’s attached via an alimuium bracket onto the three threaded holes in the side of the DeWalt bracket made by Inventables.

Unlike many other folk, I’ve pushed the body of the router through the bracket such that the boot can be fitted and the shaft locking button is still accessible. You can kinda see it in the image below (again, if anyone is interested I can take a couple of better shots).

The top half stay on the machine. The bottom half can be put on or off in seconds, and tool access and access to the locking button is unobstructed. 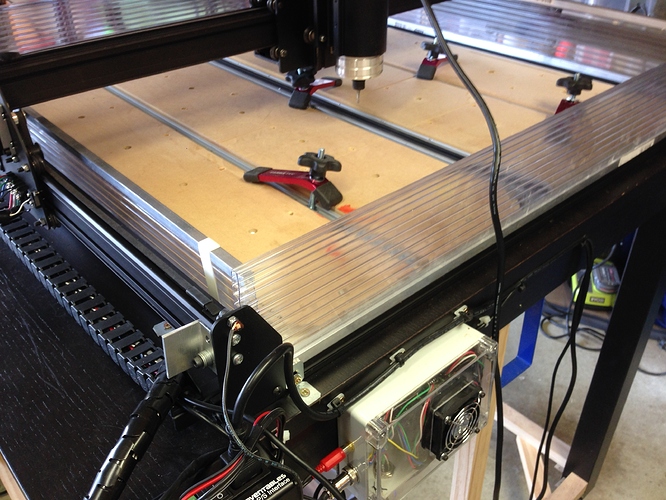 It would be much appreciated

This may show it a little better (keep in mind this is the rough prototype).

One side is supported by a (now much neater) aluminium bracket using the router bracket bolts for support.

The other side has an “L” shaped rod that passes up through the wood and into the round groove in the other side of the router bracket - it’s then secured using a couple of screws in the three threaded holes. The lower part of this “L” shaped rod is glued into a slot in the wood.

There is a plastic vacuum fitting glued into the top piece of wood, over which the vacuum hose neatly slides. The hose is supported from above with a highly technical piece of cord with a slip-knot. Open the slip-knot, put a sufficient hose through it that it reaches the router and is long enough to cover the work, and you’re good to go.

With this dust boot, a Ryobi workshop vacuum machine and the plastic dust shields (in the other images above), I rarely need to clean anywhere other than on the table.

It’s simple and basic, but then again, so am I… 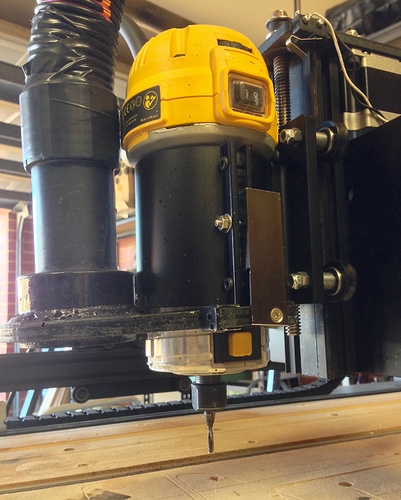 @DougBornyk - Sorry mate, I deleted the original files & only have the gcode. If I get a chance over the next few days, I’ll re-do them for you - they’re extremely simple.

That would be great. Thanks

No problems @BobMarinoff, let me know if you need any assistance. I’m happy to help whenever I can (although like now, I’m often at work or away from my machine).