Breaking homing switches - Uh, and lot's of other stuff

Well, I’ve been kicking the idea around a bit, and think that maybe a daughter shield between the arduino and grbl boards might be worthwhile. I am thinking it will install between the two we currently have, and bring the missing signal lines out to standard wire connectors such as Brian used, with filtering on board for the noise issues. Also thinking of including ability for PWM on 48V spindles, as well as a 24 to 5V step down converter to power the arduino itself. I had issues with my laptop and RPi not providing enough current to keep a stable voltage to the arduino itself.

I have a rather UGLY prototype built on perfboard now, but a finished board shouldn’t be too terribly expensive. If it is something you guys would like to pursue just let me know and I will share my progress.

I’d be interested in this if it develops to something fairly inexpensive and easy to install. Definitely share your progress, please.

Actually, while monitoring the voltage on my switches. I was having brown out faults until I added external power especially with the laptop (HP G7) I could have a bad cable too, its been around a while… With external power it is rock solid @ 5v on the switch ports when they aren’t closed and connected to ground.

So I thought it would be good to make a new topic now that I have this sorted out. As you all know by now or are about to figure out after starting to get to know your machine, The X-Carve has the option when buying to add Limit switches. The only thing is, just because they have them listed in the configurator as limit switches doesn't mean they actually work as limit switches as many of us found out the hard way after crashing our rails and breaking out switches. In anycase they will work as…

For the Arduino power, I cut a small hole for the standard jack plug and power it externally with $5.50 power supply obtained from Altronics.

So far - no trouble whatsoever: if the code brings my machine to the wrong position - it stops and lights an LED. Naz never hit metal-to-metal (fingers crossed)
Homing is reliable within 0.5 mm (or less).
For each run, I include a “reference tap” - a 0.3 mm drilling/tapping the material at X-5 Y-5 mm. Thus, the homing accuracy can be checked with tiny angle square.

If you use an original Arduino Uno or a fully-compatible analogue board, the power source is selected automatically. The board has a MOFSET switch, NDT2955 (if I am not mistaken), which selects the external source, as soon as the jack voltage exceeds about 7.2V. Thus, no board modification is necessary as soon as your external power supply is at the nominal (my supply is 9V as measured on the open socket and written on the label).

Cautions:
(1) some cheap Chinese “Arduino-compatible” boards have no automatic power source selection! That’s the price we pay…
(2) unless you are absolutely sure what you are doing: never power up Arduino via 5V pin! Use the power jack or Vin pin, or you toast the on-board supplies.

The good guidance is here:

All about working with with Sensors, Actuators and Other Hardware With Arduino

Nice! I would love to do a clock, just got the planes yesterday, but my XC will not cut a perfect circle. Im thinking i made a mistake going with the XC. Ive had it running since june and all i seam to do is adjust, check and make calls trying to get to the point your at.

Killing microcontroller power to stop a CNC is probably not a good idea. The 24V will be still applied to the GShield, and the digital lines will “source” Arduino! The current will not be enough to start the microprocessor, but may damage GShield if applied for sufficiently long period of time. See “10 Ways to Destroy an Arduino” here:

Case #1 is: the machine is unattended and reaches the limit (say wrong code or missed position). The GRBL hard limit control does a very good job of doing it right way, as the “real” industry machines do. I was thinking about the external board to kill the 24V at the power supply side (a Schmitt trigger and two solid-state relays), but after experimenting with the GRBL hardware control for a month, I believe it’s safe to rely just on GRBL.

Case #2: You are trying to achieve a safe stop in case of AC power off and then back on. For this, you need to have some kind of surge protector board with a manual reset switch (I use the $11.95 protector from Bunnings) or a UPS. The latter is way more expensive, but saves your material! This is not so for sake of X-Carve, but mainly for the power supply itself. Positively, if you have an intermittent AC, the 350W supply will not last for long…

Anyhow, the original Arduino Uno may be modified to work from the external power only. Don’t cut the wrong line. You are after USBVCC supplied from C4 via fuse F1.

The easiest way to accomplish this is to use a protoshield as I do from adafruit https://www.adafruit.com/product/196 also makes it easy to attach everything from touch probes to limit switches etc…

The Estop will kill the input to the 24v supply which powers the GShield and Arduino, as well as the 120VAC going to the spindle

Just a point - the Arduino and the gShield are not powered by the 24 volt supply.

The 24 volt supply only powers the blue LED and applies motor power to the stepper motor driver chips.

All logic on the gShield is powered from the Arduino which is powered by the USB port for a stock X-carve.

True, but look at the GShield wiring diagram!
What happens to DRV8818 if the chip Vcc (“5V” from Arduino) is at ground, and the Vs is 24V?
Ok, there are 10K resistors in-between, but I would rather prefer my components to work as per the datasheet…

Personally, I would have preferred that Inventables powered everything from the 24 volt supply (regulated down to 5 volts for the logic) and just have the USB provide a signal path, no power.

But, I didn’t design it.

The easiest way to accomplish this is to use a protoshield as I do from adafruit https://www.adafruit.com/product/196 also makes it easy to attach everything from touch probes to limit switches etc…

I’ve used this board in one of my robots. Good product. As a side benefit, connecting the limit switch wires and such without soldering.

As a side benefit, connecting the limit switch wires and such without soldering.

True, but you have to solder the components on the proto shield so it’s a trade off

True, but you have to solder the components on the proto shield so it’s a trade off

I meant: no need to solder the gShield “data header” which looks a bit like a “post-design feature”.
Anyhow, soldering the protoShield (with some add-on components) was not difficult at all: 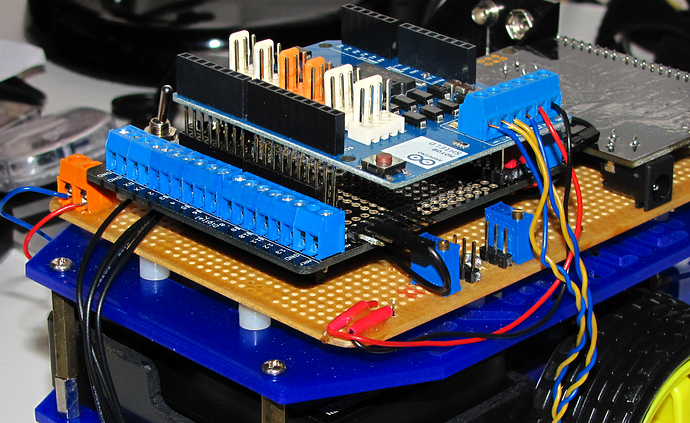 If you are planning to use this shield anyway, why don’t you simply solder a 7809/LM340T9 and a capacitor to it, so Arduino is powered via Vin pin? And all your worries about the Arduino power are solved, even without external power supply and the jack.

My wasteboard, now has so many cuts in it, I’m either going to do a 2mm surface clean-up, or I’m going to sell it as abstract art…

Gave me a giggle.

The trick is to stop the Arduino from secretly sipping 5VDC from the USB that is connected to the computer that is NOT killed by the Eswitch.

Although easy enough to do by splitting the connection and hooking the splitter upto the eswitch, I don’t see a reason to emergency stop the arduino and gshield as long as the spindle and steppers power is cut.

@AngusMcleod
Ok, you can eliminate the power from the USB cable by disconnecting Pin 1. Leave the other pins alone, they are ground, D+, and D-. You can still operate your machine and you don’t have to change the circuit on the Arduino.

Then you can use your external power supply to kill power to the Arduino and gShield.

I haven’t tested this, but it should work.

Continue executing code while it’s supposed to be off, and when the system is brought back online, instead of starting from a cold boot, it starts doing godnozewot!

The trick is to do a soft reset after hitting the Estop and the program stops itself in its tracks.