Broken belt on right side of y

any idea what would cause this? Been running perfect with about 3 lbs on the belts. Snapped in the middle of a job. Dead in the water and no work this weekend

I’ve also go 2 v wheels that the bearings pop in and out of. Is there a fix for that or are they defective? 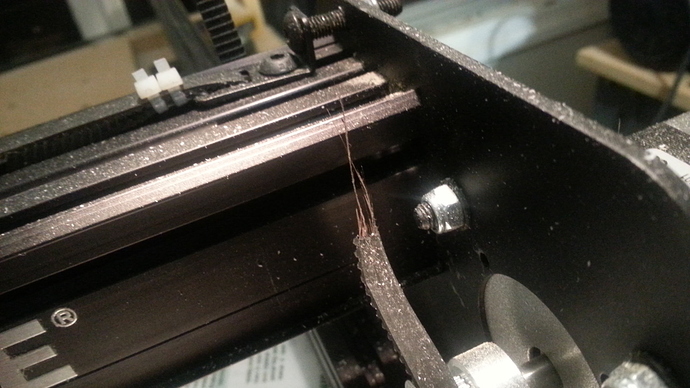 Your belt could have broken because it was rubbing the edge of the pulley or guide wheels, was damaged from having sawdust smashed into it, had a localized defect, or maybe it just stretched due to sitting in one place on the pulley for a long amount of time. Could be other things too, but I’d start by trying to rule out the belt rubbing and wood chunks.

Not sure about the v-wheel bearings, I haven’t had an issue with them.

I’ll contact support tomorrow. Everything looks good and I’ve only been cutting styrene sheet so the swarf is just fine particles. Looks like a weak point in the belt and it just snapped.

Other than some minor things, my machine is rocking. I’ve done some fantastic miniature work with a 1/32 bit that I couldn’t do by hand in a reasonable amount of time.

I moved my rear clip forward and made a smaller work area to get through a few days. It’s cutting parts right now.

Check the pulley, there will be signs that it was rubbing if that was the cause. It should be clean metal if it wasn’t rubbing. When you get your new belt on double check that the belt is traveling in the center of the pulley with a slight gap on either side.

I speak from experience on this one. I had a belt snap do to this very reason.

Edit: a temporary fix while you wait for a new belt is to shorten the travel of your Y-axis… Just run the longest remaining piece of belt from the front to the middle.

i broke a few belts because of pulley alignment issues. didnt even seem like they were misaligned until i really got to looking at them. spent some time making sure the belts ride in teh center of all pulleys and wheels and its been good since

as for the bearings there is a pretty simple fix, youll need to get some fiber washers from home depot ot where ever. they will be in the hardware section with the nuts and bolts

heres what you need

0.032" thick #10 ID x 3/8" OD fiber washers from home depot. id guess you could order from them online if you needed pic via alandavis, was his idea and should get any credit [image] 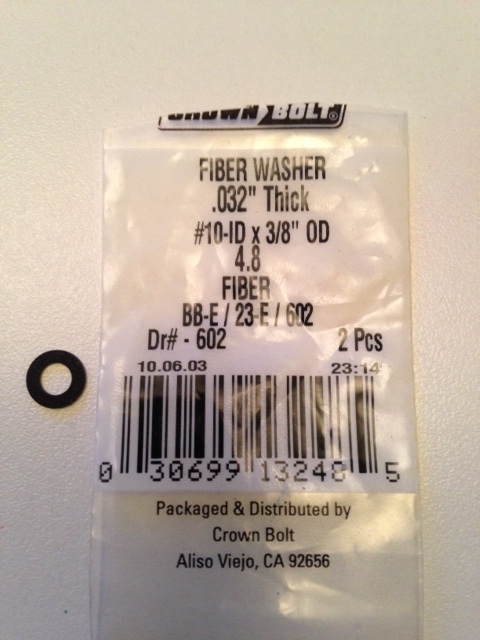 just replace the washers in the bearings with those fiber washers

I talked to support and new belt and v wheels on the way. The customer service from Inventables is phenomenal.

It really is. Glad they got you sorted out.

x popped today. I think I just got a weak section of belt. No sign of wear. 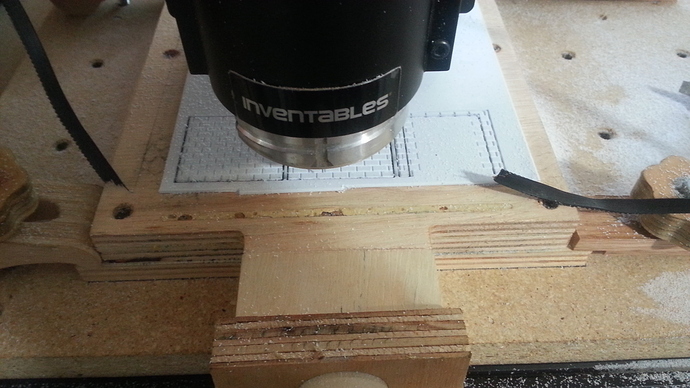 @jdm did you check the alignment between the pulley and the smooth idler? Are the perfectly aligned or are they offset a bit?

Also what are you making? It looks really cool like tiny little bricks.

oh, yes. pulleys and wheels are lined up. I redid them all again and checked tension after the last belt broke. Otherwise, my x-carve is kickin’ butt. I’m mastering a model for a company’s convention displays. 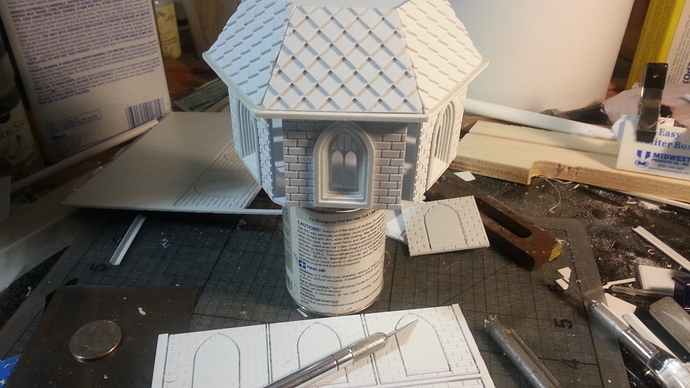 How are you measuring belt tension? I thought mine was good, but broke 3 belts until I got it dialed in to the best tension for my machine.

I bought a fish scale and am putting 3 lbs one inch up off the middle.

Specs in the store say 6 lbs working and 124 breaking, so not sure if i am on the right track or not.

I’m running 2.5 lbs and it seems to be working well.

I’m back up and running on the 250mm version of X-carve with short belts.

Doing small parts, so game on. 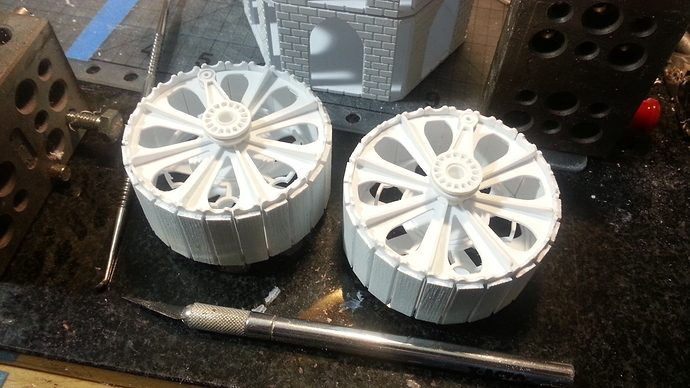 Those look pretty great. Glad you are temporarily up and running.

My replacement parts arrived a bit ago. You guys are awesome.

Just a little update. I was running a couple of jobs on the old belts before changing things out. Just a it ago, I noticed the left side y belt was pulling apart. It wasn’t like this about an hour ago. The rubber seems to be pulling apart. In the photo. the wheels look out of alignment but they are spot on with a straight edge. Just photo distortion. 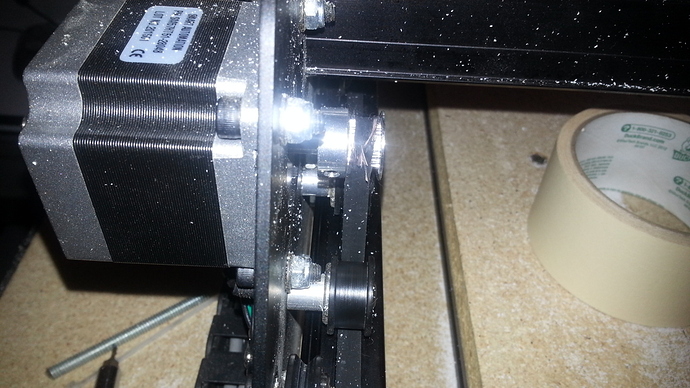 I noticed something I hadn’t seen before, though. This picture is the belt close to the clip where the machine doesn’t run and the rollers/pulley have had no contact. You can see exposed fibers through the side of the rubber. It’s odd. I have been running for 3 months and then all the belts fail within days of each other. 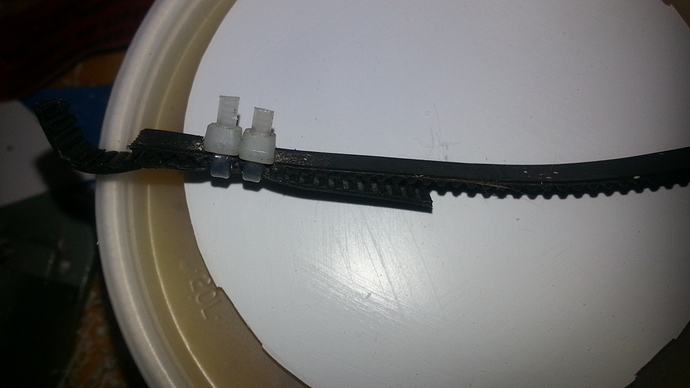 This photo is for the Inventables guys. This is a section of belt at the back of my Y axis that has not had any contact with the rollers or pulley. I’ve only run small parts in the front left corner of the machine. The fibers are exposed at the molded edge of the belt. The are a number of places on the old belts where this can be seen. Might be a vendor issue. 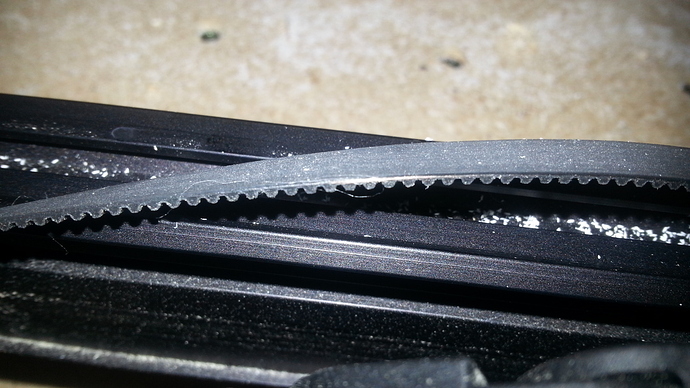 one last one. This folded under section at the clip is like new the day it came out of the package. That horizontal white line between the red is fiberglass fibers not embedded in the rubber. 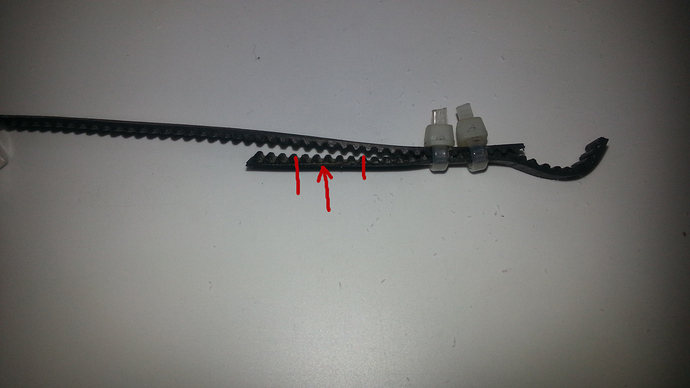