The ballnuts & co are taking some time to get here and the new Z axis is just sitting around. So, let’s put it on the X-Carve for a test drive. Or longer.

By using option A as mentioned some posts above 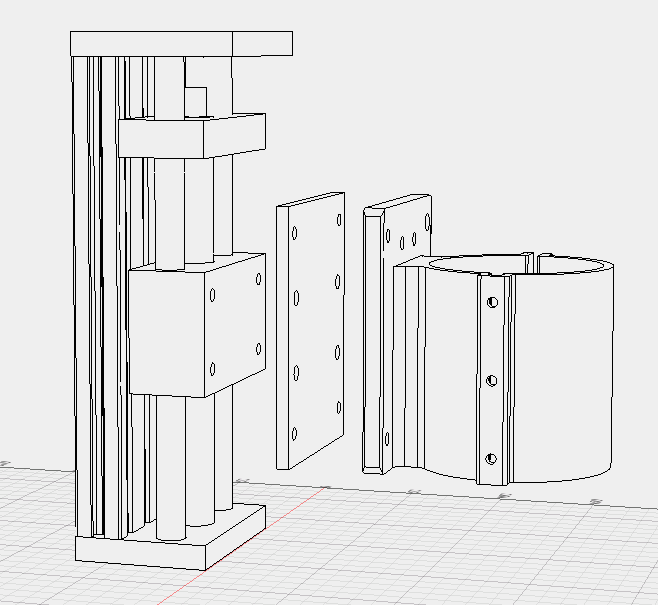 and carving an interfacing plate for the Inventables’ spindle mount, we’re up and running pretty quick. This is made out of MDF and its not just a dummy prototype; it’s totally functional. The way it is sandwiched between the carrier block and the spindle mount plate, there can be no flex in any axis. It feels that I could have used styrofoam and still get away with it 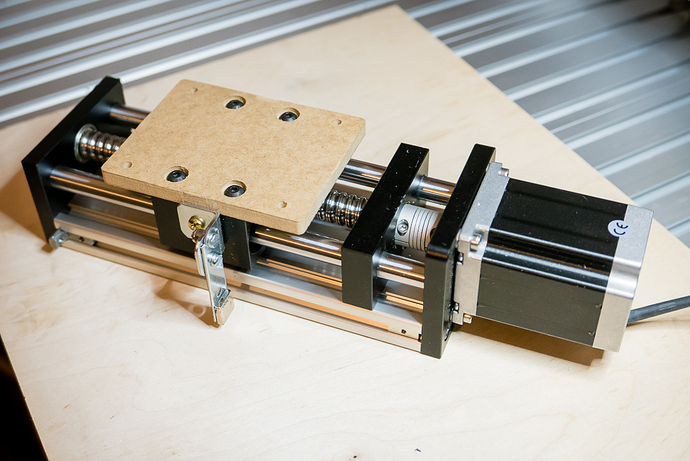 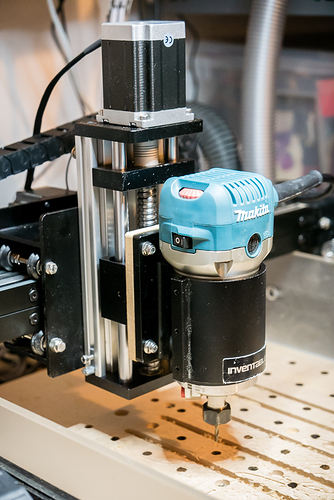 Scientific remark: holly #$!%, this is stiff.

At some point before inserting the router and once I had the Z axis calibrated to 0.01mm per 10mm (which is probably beyond my dial’s and holder’s tolerance) I was curious about its backlash. It’s the second measurement in the video bellow. Excuse the sound effect, I couldn’t help it. Also excuse the rattling, these are the spindle mount clamp screws which were loose.

Or the nun. Are kids reading this forum?

Where did you get the t-slot plates?

In order to compare the stiffness of yo X-Carve vs the B-Carve it would be interesting if you can put a 2kg load on the tip of the bit and measure how much it flexes forward. An original SO2 does 0.55mm and a bolted together 500mm version 0.17mm, your X-Carve with the new Z-Axis should do better and the B-Carve looks like concrete.

@Ebr
In my case the only reasonable (i.e. low shipping, no customs) option was CNC CAT. In the US or UK I would probably look at Misumi.

@ErikJanssen
The flex that has been completely eliminated is the Z axis to X carriage (around the Z); they behave as one solid body now. The introduction of the “2016 version” X-Carve corrected the X extrusion, the eccentric nuts and the pulleys. I believe the flex caused by the Z axis V wheels (and their long spacers) is now X-Carve’s weakest point. This would require a radical change in design (and price) to address. And this is the reason some people choose to upgrade to more solid Z axis kits themselves.

The only flex remaining is what you described, which is caused by the X axis V wheels. Quick googling says the router is already 1.8kg. Do you remove the router to measure this? Or add a couple of kilo flour packs on top of it? Insde a couple of plastic bags, just to be sure

I believe the flex caused by the Z axis V wheels (and their long spacers) is now X-Carve’s weakest point.

Totally agree with that, so your choice of Z axis seems to solve that. All is left in flex for the X axis and V wheels. Lower the Z axis, put a gauge on the bit clamping nut and pull with a rope and luggage scale. Stepcraft advertises with 0.07 to 0.12mm. With this Z axis you should already be better than this.

I understand the principle but have a hard time visualizing how to pull vertically with the wasteboard in place. I can’t remember if the bit clears the wasteboard if I pull the gantry all the way front. Maybe it does or the angle is very small. That’s why I thought of placing the weight on top. Either way it’s an interesting experiment. I will check and report.

Sorry for the confusion, the pull is in the Y plus direction not up, first a couple of times 1kg to put it flat to the Y axis end stops and then 2kg to measure, it will show torsion of the X and flex in the X wheels.

After writing this I realised I can do that by pulling the Z Makerslide bottom and not the Z gantry. And if I do that on X=0 and compare it to the middel of the X beam I can see what part is the beam torsion and what part are the X wheels.

In the rendering there is a massive X beam visible, in the assembly it seems you bolted every MGN profile to a 30x30 aluminium. Have you planned to bolt both X axis rails together to make one C beam?

Here’s a detail of B-Carve’s gantry. 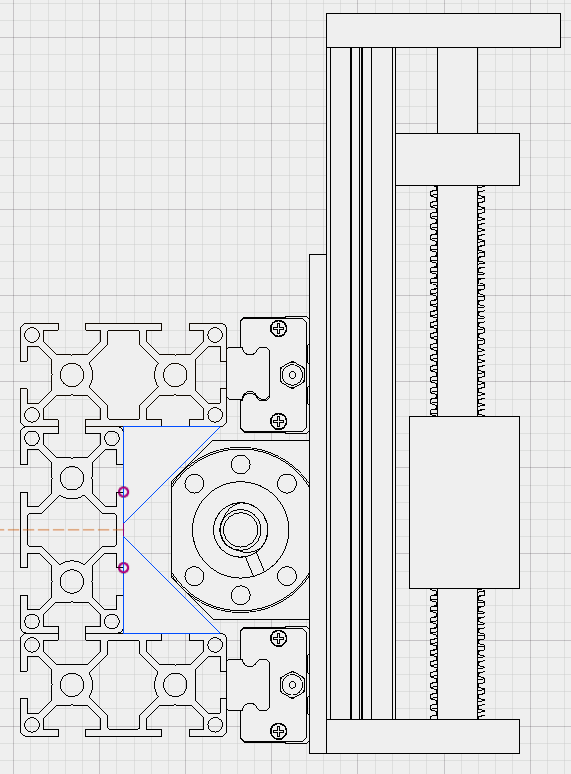 I was going exactly for a C beam in order to align the front face of the ball nut with the front faces of the guide blocks. Since there isn’t a single piece C beam extrusion in the 30 system (as is in the 20 system) I am using 3x 30x60s.

Apart from the 2x 6x M8x30 bolts that will be connecting them to the X plates, they will be attached together with 24 brackets. Those are not seen in the render up top, I was too lazy to model them

. I just quickly drew them in the snippet above in blue. Clearances are very tight.

This way the 3 extrusions will effectively behave as one. I kind of thought to also connect the 3 extrusions from the rear side as well, but I believe this will be an overkill. The brackets will restrict torsion both ways. The whole system is connected via the plate that connects the two guide blocks as well. This is a total of 12+48+8=68 anchor points for the gantry.

That is a serious looking C-beam more than 10 times stronger than the X-Carve.

That is probably the end of the flex discussion.

I have used this a good bit, it is not super precise but it works surprisingly well for under $20.

I got it when I was making alphabet blocks (2 inch cubes) for my grandson. Once it was aligned to the X and Y axis and bump stops installed it was very easy to clamp the block, machine one side then remove it and position another side up keeping X/Y zero

@ErikJanssen Not quite the method you described, but this was the best I could do. 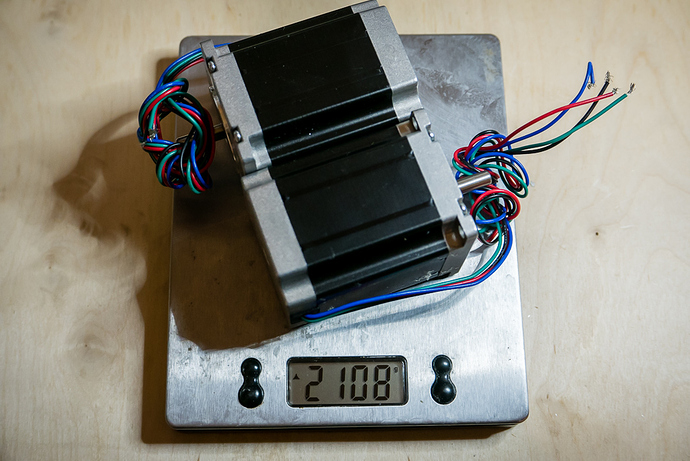 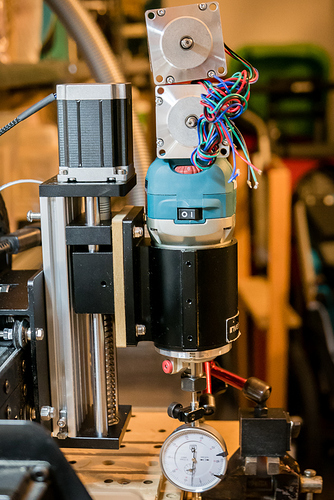 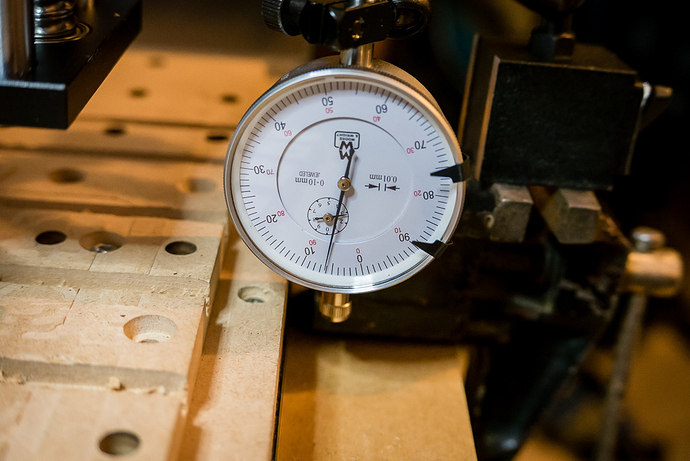 Not quite the method you described

That is ok, it shows the deflection of the X beam at a known force. With the B-Carve huge C-beam this should disappear. This Z axis is a great improvement. 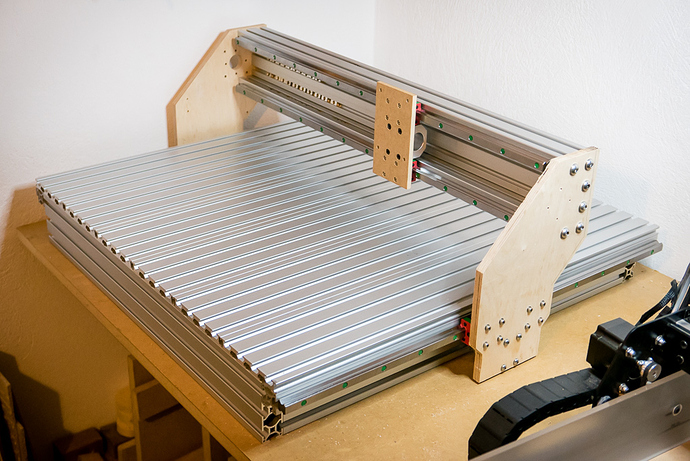 Ha… Frank’s new machine is based on the same type linear rails too. It’s interesting that CNC Router Parts uses this type of guides on their Pro line instead of their own V-Con.

The gantry brackets arrived. Installing them was kind of a subproject. The reason was that the ones that I picked due to their dimensions being a good fit for the gantry were designed to fit parallel to the slots. 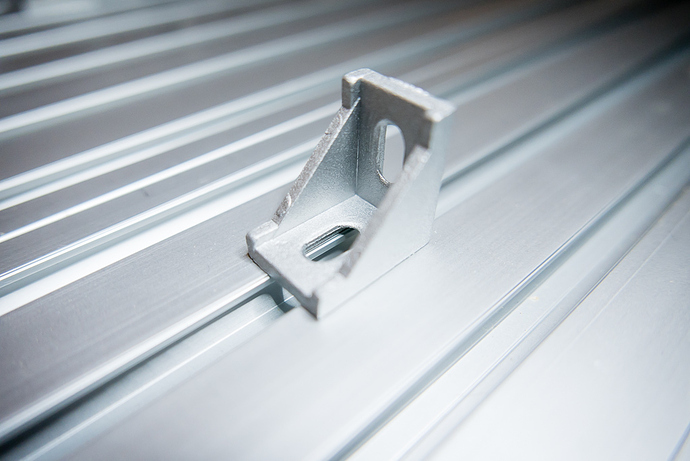 I wanted to install them perpendicular to the slots which meant that I had to remove 2 fins per side in order for the two planes of the corner to sit flush with the extrusions. 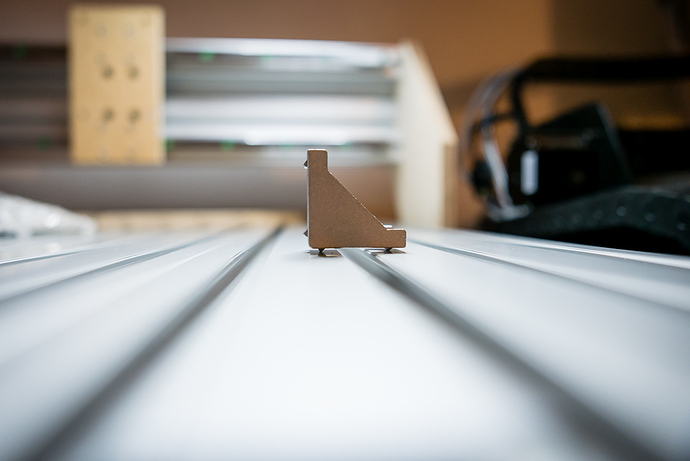 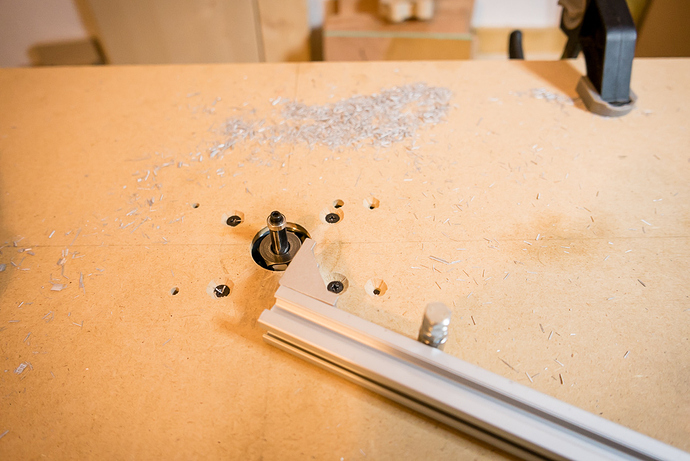 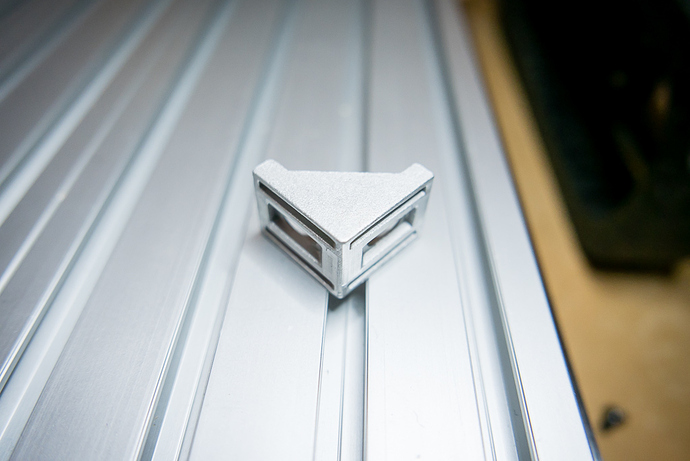 Then I trimmed the front of one side by a couple of mm to give some more clearance. This time they were processed in parallel. 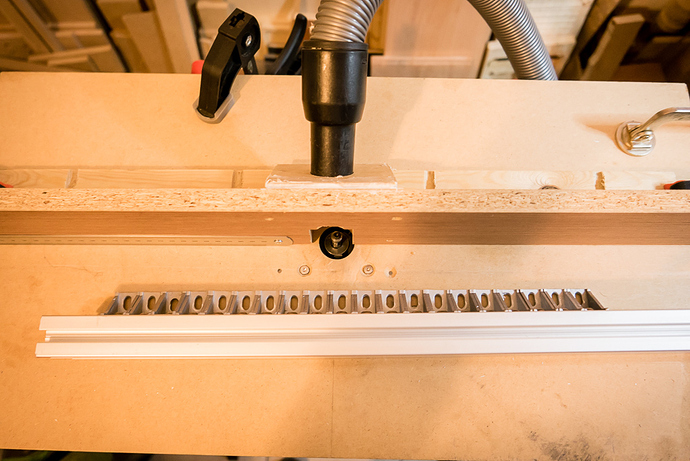 Good fit, good clearance. There’s some parallax in the shot, in reality they ballnut housing is centered. 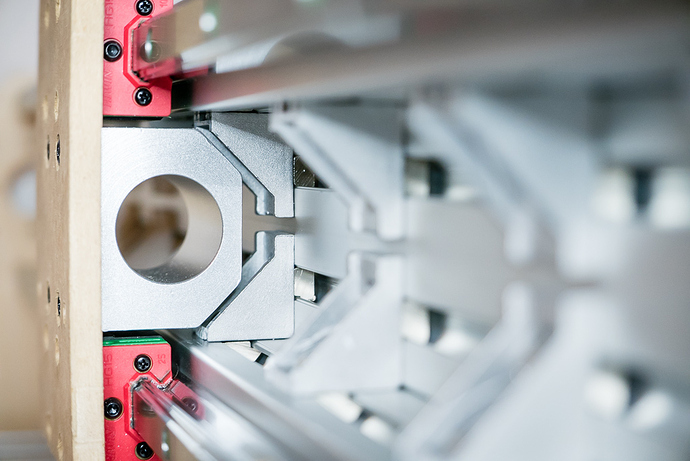 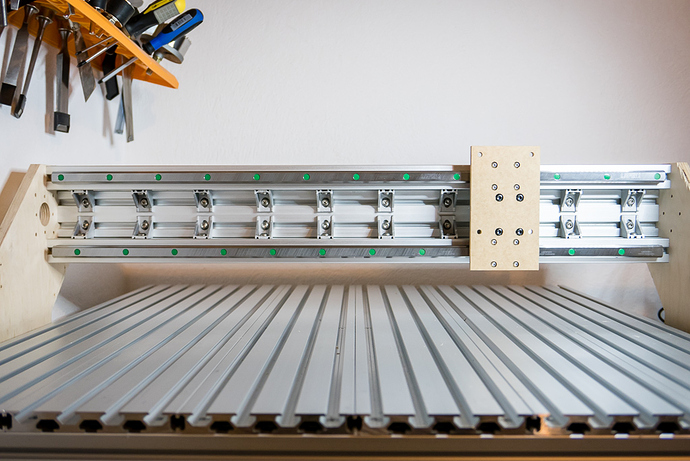 aww yeah, sanding wheel burns… nothing sweeter. I like when it hits the metal edge and heats up so quick it cauterizes the wound immediately.

great idea with the pattern bit, I imagine sanding could leave you with a non right angled bracket