Thank you Neil, learning every day

Hey guys, thanks for all the replies and information.

Yes, I do home my machine at the start of every session. And, I’m not saying there is a problem with G28. The only reason I brought it up is that I am satisfied that the G28 position I have set relative to X0Y0 with my bump stop is accurate for my purposes.
When I clamp at work piece in that position and run the touch plate sequence, the bit (I’m actually using a 1/4" brass pin) is supposed to, upon completion of the sequence, return to X0Y0Z0. But it does not!!! As I said, it’s out a bit on X and Y. The fine tuning process involves recording the XYZ positions (using the machine inspector) upon completion of the zeroing sequence and if the bit/pin is not actually at X0Y0Z0, jog the machine to the actual X0Y0Z0 position and record the difference(s).
You then adjust the inputs (the actual dimensions of the touch plate) accordingly in the TriQ Toolbox setup and when the zeroing sequence is rerun, the bit/pin should now be at X0Y0Z0. I am now using touch plate dimensions that are incorrect by 1/4", and yet the bit returns to the same position every time…a little bit away from X0Y0.
The only reason I brought G28 in the conversation is that since I performed the original touch plate setup, the only changes I have made to my machine, other than calibration adjustments, was the installation of a bump stop and the setting of soft limits and G28.
I do not yet have enough knowledge or experience with the various G-settings to know which are saved between sessions and which are reset each time the machine is turned on and the homing sequence run. I though maybe by setting G28, it was taking precedence over some setting that the touch plate uses. So as I said in my original post I was trying to go through a process of elimination to find out where I may be going wrong, and I was hoping to delete or disable the G28 setting I made after I performed the original TriQ setup and see if I could get it to zero correctly on my own.
But it doesn’t look that way???

I’m not sure as I understand what you mean here. I have been recording the machine and work positions before and after the homing sequence as I try to resolve this issue. Before I home, the machine positions are all zero, but the work positions have positive numbers, and I have no idea where they come from.

After I home, the machine positions become negative values close to the 535 mm I used when I set the soft limits, and have been consistent each time I home the machine.

So, you:
Home machine
Then use probe to get X0Y0
But when you actually send machine to X0Y0, it’s not at the corner of your stock.
No matter what you’ve changed in the probe dimensions, you return to the same, incorrect place?
Is that what’s going on?
Can you post the Gcode you’re sending? I can tell you what it’s doing.

Before I home, the machine positions are all zero, but the work positions have positive numbers, and I have no idea where they come from.

You have previously set a work zero. That work zero it’s some distance from your machine zero. When you power on the controller, machine coordinates are 0,0,0 regardless of where the machine actually is. You need to home, so the machine has an actual reference to where it is.
What @HaldorLonningdal is saying is that mechanical switches have a small range in which there might be differences in how much they are pushed to trigger. This should be very small and only noticeable if you’re doing work that requires extremely high levels of precision.

What @HaldorLonningdal is saying is that mechanical switches have a small range in which there might be differences in how much they are pushed to trigger. This should be very small and only noticeable if you’re doing work that requires extremely high levels of precision.

Correct, and if you see a 1/4" discrepancy it probably isn’t the switches, more either a work flow or mechanical issue.

But when you actually send machine to X0Y0, it’s not at the corner of your stock.

No matter what you’ve changed in the probe dimensions, you return to the same, incorrect place?

That is what is happening!!! And thanks for taking the time to help, but I’m not sure I can send you the Gcode.

I’m not actually sending Gcode to my X-Carve. Rather the TriQ touch plate that works with Easel that Charlie released in late January is based around a script of some sort. I have opened this script in Notepad to confirm the probe dimensions I have been inputting are there, but the rest of it is, shall we say, “Greek To Me”.
In essence, you initiate this script and it works with Easel running, prompting the user to jog into position for probing, defining the bit size, and running a 3-step probe sequence…first X, then Y and lastly Z. After the touch plate is disconnected, it then moves over to X0Y0Z0, and the the operator carries with the remaining Easel prompts.
The Z0 is fine, it’s just the X0Y0 that keeps returning to the same place regardless of the probe dimensions in the script.
I think tomorrow I’ll try one more pass with the work piece clamped somewhere in the middle of the wasteboard, and run the zeroing sequence with the script containing the incorrect dimensions which should place the 1/4" brass pin fully above the workpiece, instead of centered over the lower left corner. That way, I should be able to take some pictures.

Once again, thanks for your help!!!

Correct, and if you see a 1/4" discrepancy it probably isn’t the switches, more either a work flow or mechanical issue.

Any discrepancies I see between homing sequences are in within 6 to 10-thousandths of a mm.
I noticed the resulting positions did change a bit when I revised the X-axis steps/mm value, but remained the same for the Y-axis which I did not change.

My question is how do you disable or turn-off G28 and G30 once they have been set???

There is no turn on / turn off of these G-code positions. To avoid using them you just don’t put them in your G-code when programming a tool path.

If your CAM software puts G28 or G30 in the tool path the way to stop that is to adjust the post processor for the CAM program so that it does not generate G28 or G30.

I am using Easel. When I first started using the machine, I had not set any G28 or G30 parameters. Didn’t know how…didn’t know why I should. I also did not know how to display ($#) the parameters, so I had no way of knowing if they were somehow being set “behind the scenes”. Once I set them using the Machine Inspector, I can enter $# and see the values stored and changes made thereto as I issue G28.1 or G30.1 commands.

Yes, but those values are never used unless you invoke G28 or G30 in your G-code, or by an operator entered G-code of G28 or G30.

Easel should not be emitting a G28 or G30 into the G-code unless you tell it to via some setting.

Thank you Neil, learning every day

And I’ve got a long way to go before I catch up to you both!!!

That’s good information to know and have. Noted and added to my X-Carve knowledge base.

Thanks for your input!!!

Any discrepancies I see between homing sequences are in within 6 to 10-thousandths of a mm.

Which is pretty much within the specs of the Xcarve… (Based on what I found in the FAQ as I dont have an Xcarve myself)
I dont have the Triquetra either but I really suspect there is something within that work flow that is throwing you off.

So I had another run at trying to resolve my issue today, but the results were the same. Either I am doing something REALLY STUPID or there is a bug somewhere. So I will now seek the expertise of Charley and hope he can set me straight.
Just wanted to thank-you guys (NeilFerreri1, HaldorLonningdal and LarryM) again for your assistance!!! It’s much appreciated.
And, for what it’s worth, following are a couple of photographs showing my 2-part bump stop and the brass pin-and-collet adapter idea I had to be able to set bump stop/G28 and G30 positions as accurately as possible. It effectively eliminates any errors introduced by using a bit with cutting flutes and trying to use one’s eye to align the point of a 60-degree V-bit with the corner of the workpiece. When the collet adapter slides down the brass pin and falls into the bump stop cut-out without and interference, it’s good enough for what I’m wanting to do. 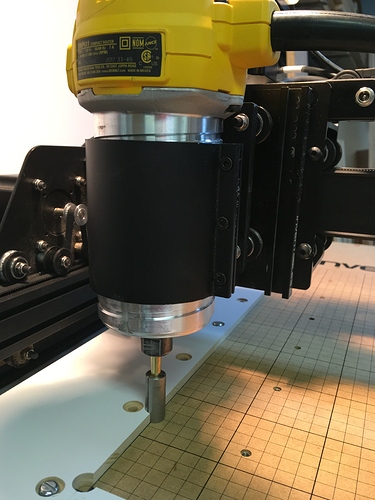 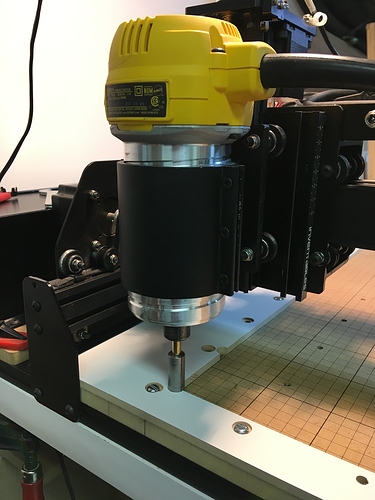 Slightly confused. If you are using homing switches and bump stop then why are you also using the TriQuetra plate?

The Tri touch plate is great if you don’t have homing switches or the material is moved later without a reference or registration point to work off of.

Guess I missed why you are trying to use both?

Right now, the issue I refer to is trying to “fine tune” the input parameters for my TriQ touch plate using the bump stop/G28 position which I know to be accurate enough for my purposes.

Going forward, what I use depends on the job. If by clamping the work piece in the bump stop/G28 position will work without interference with hold down clamps, dust boot, etc. then I will only use the TriQ touch plate to probe Z. I’ve already run the LH dust boot mounting arm into the Y-Axis rail mounting plate once, and that’s once too many!!!

But if the nature of the job is such that I want to clamp the work piece elsewhere, I still want the option of using my bump stop and some spacers to make sure the workpiece is square/parallel to the machine travel, but use the full capability of the TriQ touch plate to set the work piece X0Y0Z0.

So would after sending G10 L20 P1 X0 Y0” with the spindle at the desired location at the bump stop would the work flow now be :

Or can the G28 be eliminated as well?

No need for G28.
I’d mount your material before you even power on to eliminate the extra G30 too.

Thank you so much. This seems to be quintessential bump stop Easel work flow.