Just got my Xcarve up and running. I was playing around with some 2x4 pine and I wanted the top milled down. While it was doing this i noticed that the surface was different depending on which way the bit was moving into the wood. Ending up with a slightly bumpy surface. The bumps are consistent with the direction. I am using a 2 flute upcut bit. My suspicion is the bit is causing this, due to it being an upcut, there is a direction to how it should cut?

At first I thought it was the step over not being high enough, but the rough spot is the same size as the bit.

Any suggestions on getting a better finish? I easily sanded it down. You can hardly see the bumps, but you still can feel them. 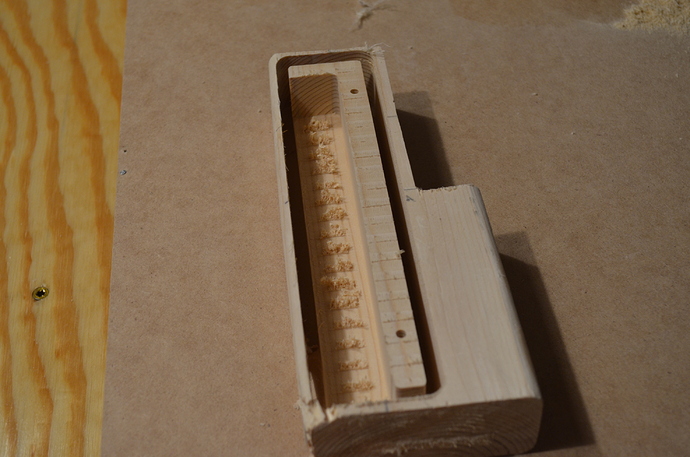 It doesn’t explain the bumps, but as an aside, if you notice a kind of sawtooth (triangular) cut pattern that’s an indication that your spindle isn’t square to the wasteboard. It’s more noticeable with larger bits, and it’s a good practice to use a wide bit (like a 3/4" wasteboard flattener) to check for square since it makes the out-of-square a LOT more obvious, and thus, easy to dial in.

I second what Robert’s saying. I had similar issues with my pocket bottoms with the spindle not being square and had to shim it to adjust.

I'm finally trying to clean up the cutting at the bottom of my pockets. It's not bad at all, but i want to dial it in as well as I can. The picture below is from standing in front of the x-carve. Running my finger across the cuts, it feels as if the front of the cut is slightly higher than the back. Sanity check here, I would want to try to shim the top of the router bracket slightly to bring the bit more true to square? [image]

Those scallops look a lot worse than it is. It’s like fine hairs of wood that caught the chips. But even so, I’m using Estlcam, so I have to set all the settings. Being new to this (3rd carve in the picture) I’m not sure what settings to do. I’ve been using Easel settings as a reference.

I feel it’s the way the cutter is rotating is making the difference more than the table since it’s always rough in one direction, smooth the other direction.

I read that topic you linked, was the spindle not square like it was sagging down so the bit tip is slightly angled toward the Z axis? What bit did you use for both those cuts in the picture in the other thread?

I’ve never used Estlcam, only Easel. But here’s a link to a clip from the video I’m currently working on that may help to explain what I was noticing.

Right, almost as if the top of the router was closer to the front of the machine than the bottom. I’ll have to take a picture of my shims and send as well, but it looks similar to the linked ones in that thread. Some people have had to shim the top, some the bottom (my case).

I follow what you guys are saying, but I feel like the problem I’m having isn’t the same. Maybe it is and I don’t understand fully. If the bit was angled, each pass would have a slightly bump, from what I read and saw. Mine is every other pass it has a slightly different depth.

I’ve attached a picture to show. You can see 2 passes deeper than the passes next to it. Every other pass is equal depth. The face you are seeing is the bottom of the pocket. 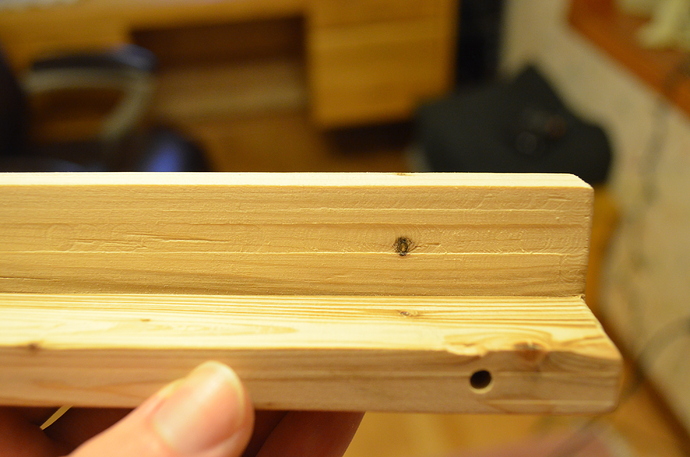 It may be a clamping issue also. If you’re using an upcut bit, it can sometimes act like a screw and pull the wood up. Was that end clamped down as well as the other end?

I’ve been using the double sided tape method. Which I played around with and no, it is not super secure. I could easily see that being it. I would guess that the faster/deeper cut per pass, the harder it will pull up on the material? I did one cut with Easel and it didn’t have such deep bumps. I used the same clamping method, but Easel’s feed rates are very conservative, but will likely leave the best results. They don’t have a feed rate for pine, so I used MDF settings in Easel. They do a 1/16" depth per pass, while I was doing an 1/8", would that make a difference?

I like using the tape method for now as it’s simple and my table isn’t made for clamps, so if I can adjust my settings to make the bumps go away, I’d prefer that. Is a upcut bit not good for bottom surfacing?

An upcut bit can be good for bottom surfacing, but if you have an aggressive feed or cut depth it’ll try to pull the material up. Downcut bits press the material against the table, which works much better if you’re using double-sided tape. Downcut bits also tend to leave cleaner cuts around the edges, so there’ll be less sanding afterward.

I can setup in Estlcam to use a less aggressive depth and feed rate on the last few layers in a pocket. I’ll give that a try and see if it has better results. So is the only disadvantage of down cut is managing the chips? I don’t have a downcut bit. I was worried about overheating the bit as I don’t have a vac system setup yet. Which is why I just went with the upcut, but now that I seen how the router works, it practically blows away all chips. Makes a big mess, but at least it’s keeping the chips away from the bit. I would assume holes and narrow pockets are places you’d have to worry about overheating?

Downcut definitely has a hard time removing chips from narrow pockets. It’s more of a problem with metal, since that’ll goober up your bit in no time.