Burning bits on this job

Hey all, i’m cutting .5" birch plywood with a 2 flute downcut 1/4" Whiteside bit and keep running through them like candy…

I’ve tried several different perimeters, but still get burnt bits! So here i am asking you guys what i’m doing wrong…

Probably your feed rate is too slow.
It seems counter intuitive at first. But what is probably causing the excessive heat build up is “rubbing”.
Rubbing is when the cutting edge of the bit passes over the same spot over and over.
This is because the cutting edge is moving to “fast”. But the speed the cutting edge is moving at is a combination of the RPM and feed rate.
So the fix is to reduce the rpm or increase the feed rate.
This is where the higher RPM of a router (as opposed to a spindle motor) becomes a limiting factor.
So your only option is to increase the feed rate.
But at a faster feed rate the load on the bit is higher so things might start to flex, miss steps or other issues. To fix that, you reduce the depth of cut.

Also check your collet. It could be damaged / stretched a bit causing excessive run out (wobble in the bit) this could be causing your problems. Precise Bits makes some nice quality replacements. If you don’t already have one it would be good to consider ordering some.

Not sure what HSS is, but its solid carbide. That’s why i had to post here, cause from my research, i should not be burning bits.

I’ll have to check the collet like Aaron mentioned.

Where on the bit is burning? 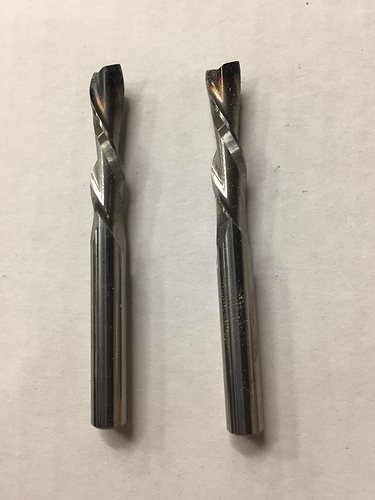 What are your acceleration settings?
What is your design like?

What I am getting at is that while your FR may be set to 100-120ipm if the path have a lot of curvature your acceleration settings may limit the true/achievable IPM.

Definitely check your GRBL settings. You can post the “$$” output here.

You shouldn’t be burning bits like that. It is just at the tip (i.e. only the part that should be cutting), so that should mean you’re not excessively rubbing at the top, indicating potentially out of square or excessive bit wobble due to collet issues.

I run my whiteside 1/4” downcut at 55ipm, .035 depth per pass. I’ve only used it on a couple things, but it performed perfectly. Going to test a bit faster or deeper per pass to see how it does. My machine is stock, haven’t upgraded the Z yet.

Cursive lettering so ya! rpm is at 1…

i’m wondering if my computer needs another RAM chip to handle the fast feed rates.

Not sure what GRBL settings are, my machine is custom built, so i dont know if i would change those settings the same way you guys do.

Update: Tried it at 150 IPM and so far so good (only cut one sheet though).

Cole,
I have been having some similar issues with the 1/4" bit burning up and am looking to try the 150 IPM.
What are your other settings that you have found rid you of this problem?
I am burning up the tip likewise and have been knocking out the centerpieces of lettering, figured maybe from too deep of a cut… (set at .1)…or it could be from the tip getting burnt up I suppose!

Well, come to find out my machine was built for torque, so it only travels at 50ipm. Thats why i was burning bits. Currently looking at industrial cnc’s. Business is too good to be running at 50ipm lol.

Tell me what material you’re cutting, and how fast youre running. Might be able to help ya.