Burning up my spindle - Lights out Aluminum milling

I’m running aluminum parts in a lights out style of milling. I’m using a Dewalt DWP660 spindle, with a 0.020" DOC feed and 450mm/min speed. I’m getting good sized chips of the aluminum, and a decent finish. The PROBLEM is, my failure rate of the endmill is unknown. Eventually it dulls, galls, gets a blob of aluminum welded onto the end, and that’s it for that job. The primary issue is with running in lights out, I’m not around to hear it when the bit go TU… and hit eStop. So, the bit is now a blob of aluminum, spinning away at 30k RPM… making… heat. After a while, this heat moves up into the spindle, melts the shielding on the windings on the motor, resistance goes to infinity, and poof, the magic smoke gets let out, the breaker trips, and a few hours later I come by to check on the finished job, to find (another) smoked spindle, a job that didn’t complete, and scrapped stock.

As near as I can tell, none of the spindle options have thermal protection, and the steppers aren’t strong enough on my SO2 to snap the buggered 2 flute carbide bit, and continue machining air until the job is completed.

I know using a SO2 for aluminum parts production work isn’t probably the most traditional method, but it’s what I’ve got to finish these complex parts until my overseas partner starts manufacturing the parts on their HAAS.

Short of using a new bit for every part (read expensive) I’m not sure what to do here. I’ve gone through two spindles now. 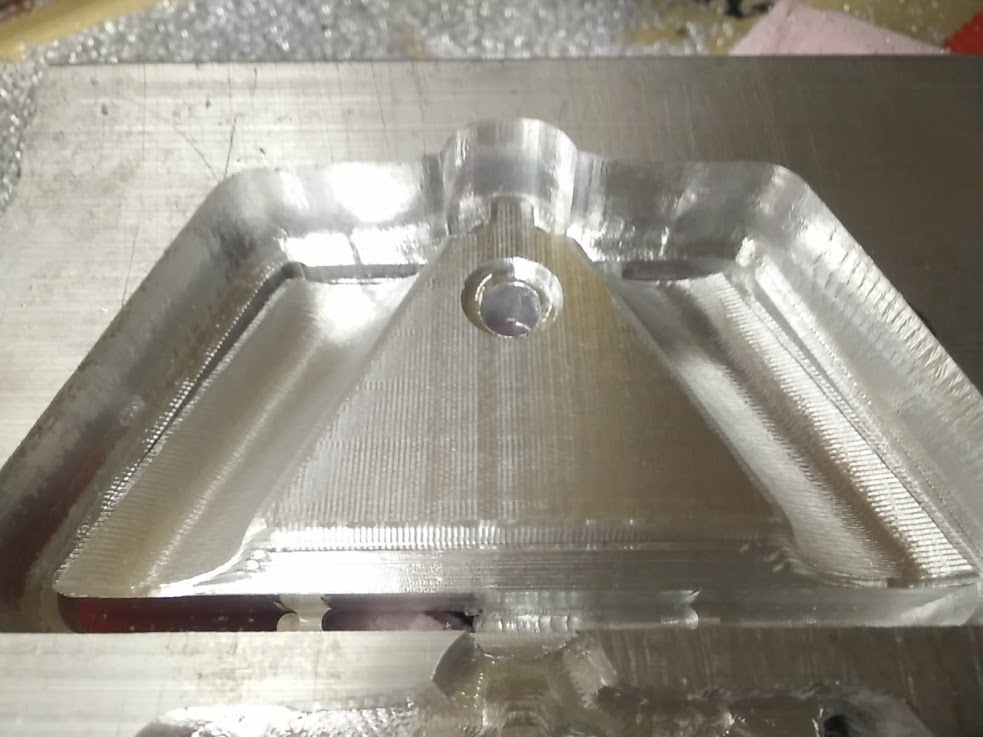 What size bit were you using?

My last aluminum cut with my dewalt on speed 2, depth of cut 0.02 inches and 45 inches per minute (1143 mm per minute) and 1/8" endmill… try speeding up your feedrate to avoid rubbing as much and melting the aluminum.

I’m using a 1/8" solid carbine 2 flute. Pushing the feedrate faster resulted in horrible finish and even shorter bit life. I got 6 parts from my first bit at 300 mm/min, and 8 from the second by speeding up to 450 mm/min. Going much higher feedrate was burning up the bit before even 1 part would complete and the finish was crap. I suppose I could toss the cutter after 4 parts, play it safe, and accept the costs of higher tooling costs… what I’d FAR rather do tho is just know that if the cutter goes TU, that the spindle would shut down, the cutter would snap, and all I’d waste is a little time.

The 30k rpm is what is killing your bits…just too fast.

What about at least setting up a webcam and a remote power kill switch, so that at least you (or a minion) could check on it remotely every once in a while and kill it if things go bad. Some kind of sensor would still be better, but at least this is a step in the right direction.

Lights out is pretty daring for these machines. Rig a drip coolant system, and drip WD 40 ( there’s a good example on the Carbide forum).
With as much heat as you say is being generated, you’re lucky you didn’t start a fire with your X carve.

The heat to melt the resin on the windings is still WELL under the ignition temperatures needed to start a fire. Thus the CE certification on nearly all power tools. No, once the windings are shorted, current spikes, and the breaker trips. The breaker on the power strip the unit is plugged into actually quick trips at 8A (under the 15A of the wall) and was picked SPECIFICALLY for that purpose. So, not really any fire risk. The plastic starts to become soft, and windings coatings drip, the smoke gets let out, but no ignition potential…

Still, the lights out running is more of a necessity of needed to fabricate parts at a rate I can’t manage to do while I’m actually within earshot of the machine. Fact is that I’ve gotta sleep at some point. To do production, I would either need 4 CNCs, a faster “real” CNC like a Haas, or baring that a Tormach, but for now that’s just not in the budget.

I have ordered some 1" UHMW sheet which I’ll be using to replace the current MDF waste board, which should allow me to use coolant. That alone should significantly increase the life expectancy of the bits. I’ll also try switching over to the DeWalt 611 spindle and will TRY running at a lower speed. I’m actually getting pretty good sized chips (even at 30k and 450 mm/min) with the 0.020" DOC. I may need to also look at the .8kw water cooled spindles, but for now I think I’ll not go QUITE that far yet. Still, it would be REALLY nice if DeWalt had build some sort of thermal protection into these units.

I’m going to also try and see if I can tune my steppers a bit better. As I said, in an ideal world, when the bit goes TU my expectation is that the stepper would just snap that carbide bit… but for now, the steppers try and drag the bit (which has dug a hole into the work at this point) and just start missing steps. They don’t have the current required to bend that bit over and SNAP that sucker. So it could be, that I need to look at going up to NEMA23’s to get more amperage. It looks still like all the controllers (GRBL/gShield, TinyG, TinyG G2) are only rated up to 2.5A per winding… so to up my power I’d need to look at going up to something like the more traditional Gecko drivers… which at that point, my interests start to look more like I’m trying to redesign the machine instead of use it to build production parts.

I’m not a fan of drip coolant, as it’s not likely to get the coolant to the leading edge of the cutter when there is also vacuum running for chip evacuation and possibly also air blasts from time to time… so I’m looking at the more traditional machinist solution of building a fog free coolant sprayer. The typical method home shop machinists go with is building a copy of the fog buster: http://www.fogbuster.com so that’s the route I’m most certain to take.

I’ve been asleep when the failure has occurred the last two times. Running lights out means just that… no attending the machine at all. The machine throws an alarm if it needs attention. Currently tho, there’s no real means of that occurring. I can see about setting up some sort of IR temp reading on the spindle and if temp starts to spike, I know that something is going wrong, trigger feed hold, and throw an alarm. Then when I check on it next, it would be in a hold state and I could investigate what’s gone wrong… That may be the route I end up going. It wouldn’t be TERRIBLY difficult to do something like that using something like the TI TMP007 Remote Contactless IR Temperature Thermopile… I’d need to totally redesign my chip / dust collector to integrate the IR sensor into it, and somehow protect it from the chips themselves, but I think this should be possible to do… I’m not sure if that’s a real solution tho. I can’t be the only person doing this and running into this problem, and there are many ways I can possibly go to find a solution… so hoping to see what others have done/tried and not have to completely re-invent the wheel if someone’s found something isn’t worth the bother doing.

These are supposed to be good:

Find many great new & used options and get the best deals for 1/8" Carbide ENDMILL for Aluminum Milling Coated 3 Flute Destiny Tool V30805S at the best online prices at eBay! Free shipping for many products!

Yeah… I’ve got a LOT of other stuff I need to get done each day than stand next to the machine watching it run 9 hours jobs. I’m running lights out because I have to, not because that’s what I want to do.

Your problem reminded me of an idea I had awhile back. When I do this (probably in the next month or two) I’ll let you know when I upload the design and code.

I’m using the 2 flute variant of that same endmill.

Find many great new & used options and get the best deals for 1/8 2 Flute Aluminum Cutting Endmills - Destiny Tool V20804 at the best online prices at eBay! Free shipping for many products!

I just don’t have the feed rate to support 3 flutes. Running a 3 flute would burn up faster than the 2 flute would. Honestly, I’d like to try even a 1 flute with these spindles… but there isn’t one available that I’d trust at this point. Still, at $11 and endmill, it gets PRICEY tossing them after only 4 parts… especially if I could get 3-4 more but risk burning the spindle up… {shrug} I dunno. Maybe if I were running 8k RPM I could use the 3 flute, but no way with the 30k spindles.

Typical machining of aluminum even on bridgeport mills calls for a 2 vs 4 (or 3) flute… so I’m sorta fighting myself just from my years of milling aluminum with going away from a 2 flute anyway.

In a typical machining situation, where tool life is an issue, you break the job up into smaller chunks. You may lose time, changing tools, but it’s GOT to be cheaper than changing routers…

Sounds like you are asking an awful lot of that dewalt router. I’ve rigged up an air cooling system on an older, enclosed denford table top mill that I have. I used an inline oiler and pneumatic tubing to direct a fine mist onto the bit as it cuts. Helps to eliminate galling and on the bit quite a bit. However, you would need a pretty significant compressor to run a 9 hour long job. And, blowing chips all over your shop, if you don;t have an enclosure is not really ideal either.