Can I stop mid project and restart without harm?

If I am in the middle of a job, can I shut down temorarily and resume later at the spot where I left off? I am leary of letting the X-carve go while totally unattended.

For example, working on a long job, say 6 hours, and I must leave my shop. I know I can pause Easel and resume. Can I also stop my spindle with the switch and restart the spindle and Easel later. Will this do any damage to electronics or will I lose position after a long pause.

(I have set my computer to prevent shut-down or sleeping from keyboard inactivity - learned that lesson with my old 3D printer.)

Is it possible to stop and start when using chilipeppr too?

also make sure that your coumpter will not go to sleep

also personally i was leary about leaving my machine when it was running to when i first started but really confidence in your clamps, desgin, and machine needs to be had

really the worst that can happen to a unattended machine is:

settings
desgin
work piece
and machine before a long cut

Leaving the machine running unattended is pretty dangerous. If the gcode does something unexpected, the bit binds or a stepper stops moving the bit can easily generate enough heat to start a fire. There are not any sensors or fuses or thermal overloads that will detect and prevent that type of fire.

Sure if the machine is well maintained, the work is clamped adequately and you are sure the gcode has no errors then the possibility of really bad things happening is greatly reduced. But I don’t discover most electrical/mechanical problems until they cause something to break. And so far things have only broken while the machine was in operation.

It is also not recommended to leave the motors engaged and idle for long periods of time, they can get pretty hot just holding position if you leave then on long enough.

My advice would be to never leave the machine running unattended.

what do you mean the controller doesnt have thermal protection?

But the greatest risk of fire is not from the controller board, but from the 20,000 rpm bit spinning in wood. My comment was that the system does not have any way of detecting or preventing a fire caused by the friction between the bit and work material.

oh oh i got you i mis understood

well that is a potential hazard i wonder though how often could that happen? if at all?

here is a link for some lite reading that is interesting

The more likely bad event would be that a belt breaks or a pulley comes loose so the spindle is stuck in the material and cannot retract or move correctly.

I broke my Z belt just a few weeks ago. If that had happened with the machine running unattended it could have been very bad.

well that is a potential hazard i wonder though how often could that happen? if at all? How to Survive Your First CNC Router Fire - CNCCookbook: Be A Better CNC'er

Take some sawdust and add heat.  My brother likes to use a 9V battery touching steel wool to make it red hot. Poof! It bursts into flames pretty easily and you’re on your way to feeding your little fire larger and larger pieces of combustible...

I guess anything is possible

I tried to do this one done while doing a long carve. Paused in Easel. When I came back, easel was asking me how the job turned out, as though it had finished. The project was spoiled, as I couldn’t continue from where I was.

you were trying to pause one project and start another at the same time?

or trying to run 2 jobs at once?

Thanks for all the comments, lots of food for thought.

WhileI have confidence in my system, I have also had a few errant movements of the machine that I was able to stop because I was there. Not sure what may have happend if I was away.

I have smoke detectors in my shop, but still, I will err on the side of caution and run mostly attended except for small breaks. It sounds like I can pause in the job and turn my spindle off and return later, restart the spindle and continue. As also mentioned, keeping the computer active during the away period is a must (change your settings appropriately (I have a customized “CNC power setting” I use on my computer). Using E|asel or Chilipeppr give me one more concern in being browser based, it is one more potential program (my browser - Firefox) to crash during the “pause”. Maybe a stand-alone gCode processor program would be a good option.

So, I will monitor when possible and use “pause” when not possible to monitor the running machine.

I have only had one job go bad after pausing. It cut a straight line through the material and resumed right on path.

Ha. One of the first accessories I bought for my X-Carve. I watched my neighbors house burn down when I was a little kid and it is still one of my biggest fears to this day. 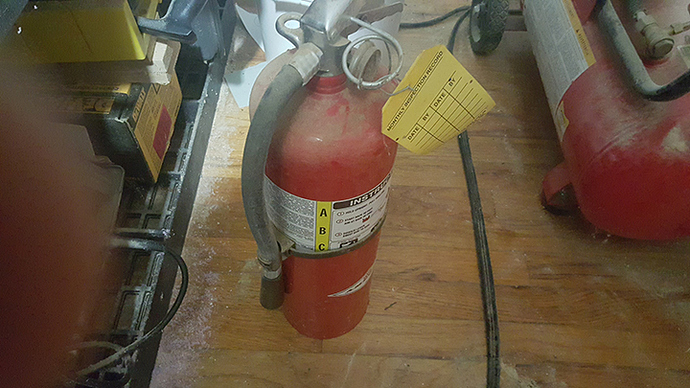 I installed buttons for cycle start, pause, and cancel. I pause my stuff all of the time (I use UGS as my g-code sender) with no issues. I am a big fan of keeping the machine under almost constant observation while it is cutting. On my old machine I had some MDF catch on fire when the machine got confused (computer locked up) and I was glad I was there when it happened. It only took a minute to go from smoking to flames with the router spinning away mindlessly with the bit buried through the board and into the wasteboard.

Sure, but when you scratch it’s like old friends getting together.

did anyone confirm if the X-carve controller has thermal protection?

The gShield has built in thermal protection.