Can something be too detailed for Easel?

So I wanted to cut out a Mayan Calendar with my X-Carve to test out how detailed I could get it with a 1/32nd inch bit. I got everything set up fine in Easel up until I tried to get it to calculate the tool path and then everything just froze up. I tried this on both my shop computer and office computer with the same results. I then set it up in Cut2D and the same thing happened with Universal Gcode Sender. I broke up the project into 7 parts in Cut2D and then it worked fine. Has anyone else had similar issues? Here is the completed project. It is 24" and made from upcycled oak shelves. 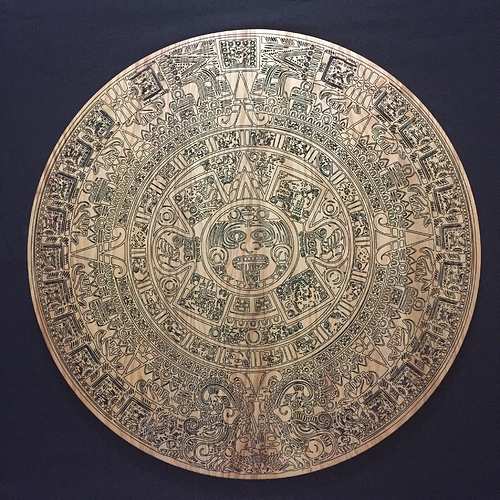 Same problem, same image, but I generated the gcode from Vcarve (about 900k lines of it). UGS froze up about half way through the cut.

I broke it into two files and it worked fine.

This project was to test my new updates to the X-Carve and it handled wonderfully… just the software issue was a little frustrating.

The only material I had large enough at the time was a piece of 1/4 inch MDF and the amount of detail was really too much for the MDF to deal with so I lost a lot of the fine detail.

Thanks, I had some old oak shelves that a friend was throwing away so I made a larger panel and used that.

And now you have a Christmas gift for the wife!

Although that would probably shorten my list of things to do by at least one… this one is going up for sale.

Any chance you could load that into Projects?

What do you mean loaded into projects?

After purchasing pic sender. I feel the $15 was well spent. ugs has it’s place and I enjoyed it very much. My last project consisted of around 1.5 million lines of gcode and it ran flawlessly. I think there will be a point and time ugs will be able to handle more and i hope it will it is a great piece of software.

What is pic sender?

So pic sender would take the place of something like Mach 3 (which i understand does not work on the X Carve anyway). Correct?

from what i understand that mach 3 is sender then yes. The claim is pic sender has been tested to run 10 million lines of code and so far i can not argue that.I used usg until i got into bigger projects and pic sender felt awkward to me but it is still new to me but the basics are the same.

One of our other customers ran 5,750,000 lines of image engraving raster gcode generated from our PicEngrave Pro 5 with PicSender recently. It was a 10+ hour run with his 2W laser.