Can the xcarve do it?

Question to the experienced: I’ve generated 10 hours of gcode tool paths for a 3D carve project using Meshcam 7. 2 hours roughing with a 1/4 end mill, then 8 hours of finishing with a 1/16 inch ball end mill. Is this crazy? Will the xcarve finish the job, sent through UGS? I have a good Windows 7 laptop. Any setting in UGS I should be aware of?

Make sure all power saving features/screensavers are off in windows.

Thanks Phil. I think I’m done my best to do all of that. If there are some specifics on how to make a stable setup, that would be great. For all intensive purposes, my setup is 100% stock. I have a rigid x axis with the larger Makerslide tube. I will have a z-axis on linear rails in the future, but this carve is going to be on the stock z-axis. I’ve generated the g-code; I’ll put it on my Windows 7 running UGS; I’ll set up my stock; zero; hit send. I’ll follow the advice given above to make sure Windows doesn’t screw off. Other than that, is there anything special to ensure a long duration carve?

I’ve split long cuts up into two days jobs (I use UGS too): rough cut evening of day one, finish pass morning of day 2. Or pause between days. Like mentioned above, disable any powersaving features (don’t let the machine go to sleep) on your PC, and don’t turn anything off between cuts: I made the mistake one time of pausing the finish over night, and keeping the arduino on (powered over USB from the PC), but killed the powersupply to the xcarve (somewhere I read you could do that, don’t), which still caused UGS to loose connection. I was able to recover by hacking together a new gcode file based on where I had paused it, but… lesson learned. Keep the power on

I’ve tried to carve my code twice now, and I have had my machine simply stop executing gcode in the middle of the job, and UGS shows an alarm and I have no control over the commands. I’ve made some changes, and now things appear to be working smoothly as I do an air carve - I think it’s going to complete the entire gcode of 567,000 lines. However, I’m concerned about when I do the actual carve.

The only thing that will be different is that the spindle will be running. I have the Dewalt 611. Will the AC current flowing through the power cable induce noise in my DC current shielded wires in the machine? The AC power cord to the Dewalt runs alongside all of my shielded wires to stepper motors and homing switches.

Here’s a list of the things that I have done to make things work so far:
-tightened belts
-tightened wheels
-rerouted shielded wires for all of my limit switches
-replaced limit switches
-adjusted pots (x, y and z all just under 2.0 volts)
-flashed grbl 1.1f
-updated UGS to version 2.0 nightly build
-updated all of my settings to match those of the most experienced x-carvers here
-test,test,test…

So far, no hiccup on running the large code in the air (2 hours).

Air carve ran for 3-4 hours. I turned on the spindle, and no errors. If you open UGS with the .bat file, you get the java app but also a command window that will output verbose messaging. When I was having errors (before pot adjustment), I was getting messages that say “position doesn’t match line X”. I stopped getting thise messages, even after I turned on the spindle. This morning, I started the carve again. The only thing difference is that I’m actually carving and running the dust collection. Only about 10 minutes in to the job, I got an alarm, and I could not resume the job. UGS gave a response, and I don’t have the exact error wording. Overall it was locked up. UGS recommended rehoming. So, I turned off UGS, reconnected, rehomed. Ive just set off the carve again to see if the same thing happens, looking for reproducability. It is now gone past the last error. I will not touch anything, but I’m afraid of UGS killing the job again.

Can anyone offer any ideas why my jobs stop in the middle? I attached a picture of the system. See anything bad? Could my system have static discharge? AC voltage noise?

And there… It stopped again. 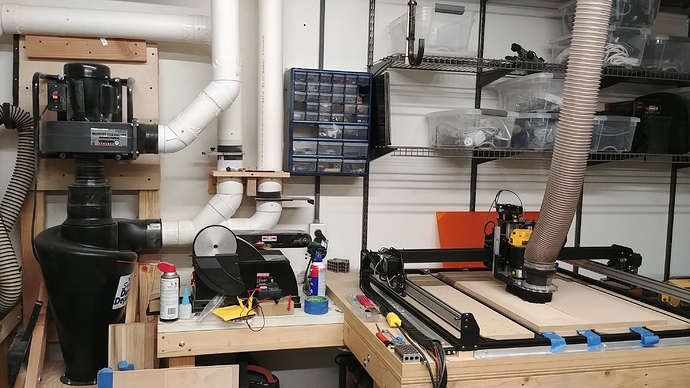 Are your Xcontroller and your Router on separate circuits? Do you have the ability to do this? My router runs on an extension cord to another circuit on the opposite side of my garage.

eDragon Surge Protector
Mine was constantly glitching due to the router noise, I put one of these on the Xcontroller and I haven’t had a problem in a year. My router is plugged directly into the wall and everything else into a power strip and then plugged into the same outlet as the router. Seems to be working. 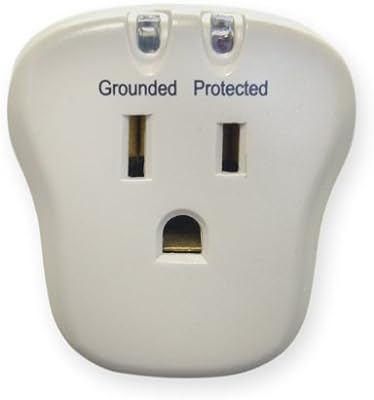 related might be just adding a ferrite core to the wire feeding the xcontroller? though, for $10 your solution might be good and cheaper… I know I have some snap on ferrite cores laying around my house from 1990’s computer monitors

You mean there is someone else that keeps junk like that! My wife says I’m the only one…

Thanks for the feedback everyone. I have fixed my problem! It was difficult to track down, but now that it’s solved, it seems like a no-brainer. STATIC discharging from my UNGROUNDED dust collection system was probably the issue. Another big clue was that my machine would cut out at “random” times. It’s not actually that random though. It would carve 5,000 lines of code, and then alarm. I would then fiddle with it, and then restart the carve in the same place. It would “air carve” for those first 5,000 lines (no contact with the piece; no dust), and then within the next few thousand lines it would stop and alarm. I could air carve no problem and with the spindle running. I hooked up the dust collection and I’d have a problem. So, I screwed a small wire to the plastic end piece of the dust hose, soldered it to the copper spiral core in the dust hose, and then ran a copper wire along the dust collection PVC pipe all the way to the outlet ground.

I also connected a ground line from the metal router body to a new power cord that has a ground plugged in. This is temporary until I have time to rewire the Dewalt. But honestly, I’d rather not drill into the Dewalt in case I use it one day without the XCarve. Thanks to the two following posts for closing the loop on my troubleshooting and confirmation of my issues:

Mods if this is wayyyy to off the map, please feel free to delete it. I wont be offended. You all are pretty smart and would like some thoughts or ideas on this “situation” I am a solar guy. Have had my own company for about 5 years. talking to a potential client now that says she has some EMF sickness. She wants to be off grid… but that is not going to happen… even if she had room for at least (88) 200ah batteries and (150) solar panels. She says that the power company is threatening to …

Pictures of my project to come soon. AKA, what was the big deal about the long code!

EDIT: By the way, I live Tucson, AZ and the humidity here is just about always less than 15-20%. I wonder if my machine was alarming out SOONER (10% into a job) rather than later into a job that was almost finished. For that, I guess I’m lucky that I could see the problem faster.