Carve decided to go deep into my wasteboard

I’ve done several of these single SVG charcuterie boards successfully and for some reason this one decided to dive deep into my wasteboard and keep going. The board measured 0.74" and that’s what I had it set to in Easel, and the cut was also set to the same. It carved the handle hole first with no issues, then moved to the outline. Suddenly I hear a terrible noise from across my shop and I see MDF dust flying up. I hit stop in Easel which it stopped then decided to jumped into my board

I measured and it went 0.3" into my wasteboard, which meant my new Amana with .75" cutting depth was plunged 1.05" into my material. 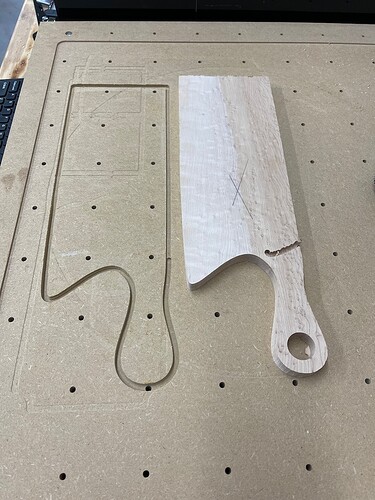 Put another board on the table and tried again and it carved just fine. Any ideas why the first one went out of control? I’ve also had a carve where it decided to do a 1" groove 1/8" deep at the very end and messed up that board.

This could be caused by the collet coming loose and the bit slipping down and it’ll cut deeper like this.

There ate other causes if excdssive depth but since you mentioned it isnt repeatable. The loose collet theory is the most lilely.

I don’t think it was a loose collet as I did a 2nd carve with the same bit in hard maple without tightening it and no problems. It was carving just fine then suddenly it started screeching like it took a deep plunge. Of course it didn’t help that the solid part of the shank was against the maple. Also, when I hit stop in Easel the spindle decided to take a left turn which is odd.

Is the $1 grbl setting set to 255?
If its set to any other value than the steppers will not hold location after stopping ghe carve and that could cause the carve to go on its own course since the router was still spinning but the steppers not locked.

Yes and I also set the switches inside the controller to hold the motor lock.

One more thing. When I stopped the carve, the Z axis raised some before it went across the board. You can see this in the pic I posted above.

If the bit did not come loose then for some reason you lost some steps with your z axes. That is the reason it went to deep then would not lift enough to go back to start.