Ok, I had a real pain-in-the-■■■ carve error. Attaching pics, gcode and output from UGS. I’m going V-Carve->UGS->X-Carve. I didn’t see the carve go wrong, but it happened sometime before the top four holes were cut, so either during the profile cut or the bottom two holes. Just a straight line right across the bottom of the honeycomb, about a quarter inch deep, quarter inch from the bottom. No clue what happened. The rest of the carve was perfect, other than two invalid gcode errors that happened near the front end of things. I’d really appreciate any insight.
Thanks 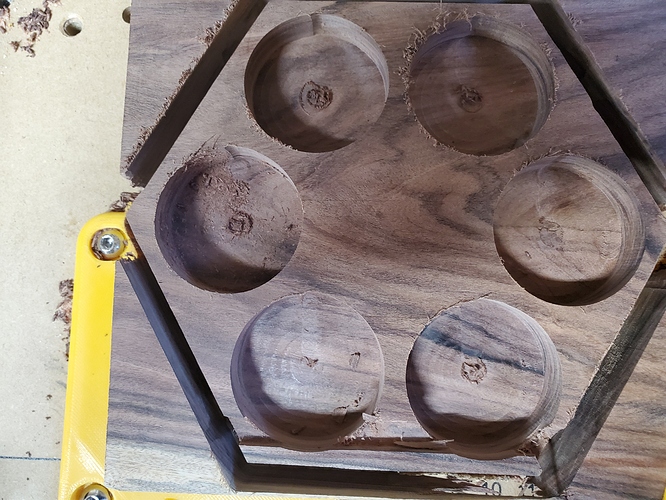 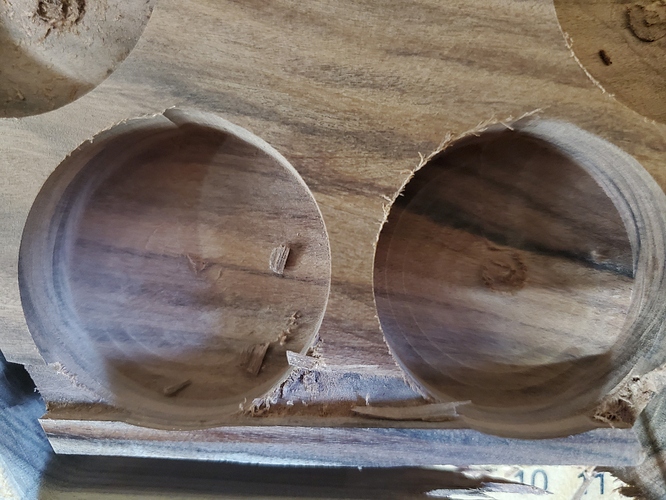 When it returned to zero at the end, was it off?
You lost steps. Maybe you hit the screw in that yellow corner, machine lost position and continued on its way.
Gcode looks fine.

Nope, zeroed right where it was supposed to be. You can’t see it from the angle, but the screw wasn’t hit at all. a little of the yellow plastic did get carved though.And the circles are right on as well.

Somewhere steps were lost.
The screw was just a guess.
What endmill? What Feeds and Speed?

Probably not the reason for the errant cut, but I wouldn’t recommend a compression end mill for a cut like that.

Looks like you just resumed from those errors…that could explain an off path cut without a loss of position.

Thoughts on why the errors occurred?

Look like noise. Maybe time to upgrade your USB cable. When I see random errors like that for lines that have no errors, that’s what it usually is. Especially at the start of a carve when your router and dust collection are just getting going.

Ugh. I have a decent Tripp-Lite usb cable, and my dust collector is on a separate circuit… I don’t seem to run into this issue in Easel, just UGS. I really prefer the UGS interface though.

really prefer the UGS interface though.

I’ll check it out.