Have any of you ever tried to carve through spray mask before? Wondering if this would help with painting.

Great question, I was wondering too.

Not sure what spray mask is, however I’ve successfully carved through clear plastic adhesive sheeting & making tape etc. Providing whatever your using adheres reasonably well and your bit is sharp and not aggressively ‘pulling’ the work upwards, it should be fine. I generally use a downcut spiral or a straight-fluted bit. Haven’t tried this with a spiral upcut though.

I have tried masking tape and paint mask and neither worked very well. It kind of tears the edges and is very rough looking. It would have left just as much cleanup as spaying and sanding.

Assuming you mean something like Oramask, then yes, I just did this. I found that it really depends on a few factors. One is your bit. My 90-degree v-bit worked flawlessly. I use an Amana In-Tech insert bit. My 60-degree bit didn’t work as well. I tried both the Inventables bit, as well as a Timberline (by Amana). Another factor was the size of the lettering I cut. When I cut larger letters, it was fine. Smaller letters did not cut cleanly. I figure this to be a result of the bit moving along quickly on the larger letters, while the smaller letters required the bit to stay in smaller more confined spaces for longer periods, causing the Oramask to melt. I cleaned it up after the fact with an Xacto knife, but it was a little frustrating, and it got pulled off in some of the very fine areas inside of small letters. I don’t know what your intended application is, but overall I think it works pretty well. I just talked about this in a thread yesterday also.

Edit: Here’s a picture after I carved through the Oramask. 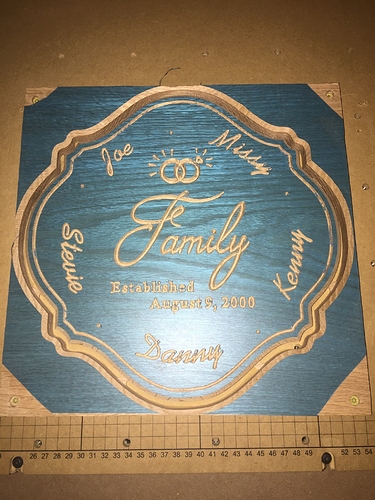 Down spiral bits worked flawlessly for me using a mask. I used 1/4" and 1/8" bits here. The white is the mask: 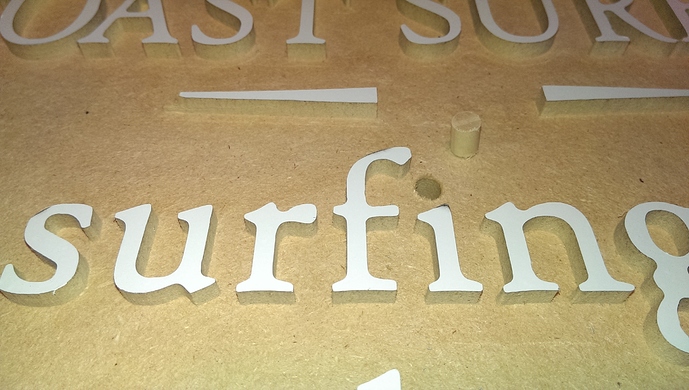 Here is an example using up spiral bits (pretty horrifying): 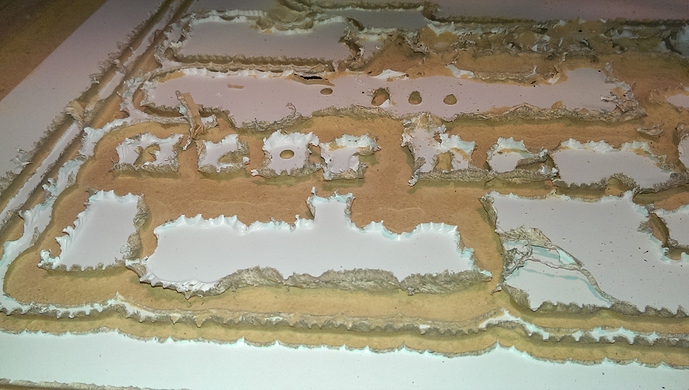 What a mess! Looks great using the down spiral. On mine, I ran the 90-degree v-bit, on path, then came back and followed up with my 2-flute up spiral, on the same path, so the up spiral bit never touched the mask. Glad I did it that way! What brand of mask was that, and do you like it? Is that the Oramask 811, or something else like Avery?

I used permanent vinyl because it is what I had. Will not make that mistake again. I won’t test anything else until I get a similar project but I now have a roll of removable shelf liner that was very, very cheap that i am dying to try.

Here is the stuff NOT to use (unless you are makeing vinyl lettering to affix to a sign… then it works like a champ): http://www.amazon.com/gp/product/B0033UBN9Q?psc=1&redirect=true&ref_=oh_aui_detailpage_o00_s00

My wife works with vinyl alot, so I have a house full of it. I definitely wouldn’t put permanent vinyl on MDF or wood, for sure. There are different grades (i.e. indoor Oracal 631 vs. outdoor Oracal 651, which is rated at 7 years outdoors if I recall correctly), but none of them are appropriate for masking. I wish they were. I have a huge box full of odd colors that my wife will never use. As far as shelf liner, maybe you’ll have better luck than I did. I tried that before I switched to Oramask and had no luck whatsoever. But I’ve seen people mention having very good results with it before. I guess your mileage may vary. The difference between shelf liner (or even permanant vinyl) and Oramask is night and day. Oramask is what they call a “rigid” vinyl. It is thin and lightweight, and is flexible, but once you handle it, you’ll understand the “rigid” part of it. Put it on the wood and use a credit card or similar to smooth it out and give it a good seal to the surface (bondo spreaders from harbor freight are super cheap and work well). Then when you’re done, it peels off cleanly with no residue.

Don’t get me wrong - this stuff worked… it was a MAJOR pain to peel off all these letters, then wipe the adhesive off, then, let it dry… yada yada. Where do you get your “Oramask?”

Link to Oramask @ US Cutter

@MattThompson My guess is the V Bit on narrow cuts isn’t cutting as well because the speed is much slower. Cutting a 1/8" wide letter compared to a 1/4" letter means that the surface speed of the cutting edge will be passing through the wood at half the speed (because it’s half the distance from the centre of the tool bit). If I had an improvement “wishlist” for V Carve (and I guess for Easel) it would be to have the software drop the feedrate when cutting wider letters and then speed it up again for the narrower cuts.

V cutting has always a compromise for me; I hate watching slow feedrates for the 90% of the work that is narrow and praying that I wont lose steps or ‘bog’ the machine down or burn the wood when it does the deeper sections.

Seems like a valid point. I suppose that with V-Carve Desktop, I could make a separate toolpath for the really small stuff and ramp up the feed rates to see what I get. I’ll have to give that a shot and see how it goes.

I just wish V Carve would do it automatically.

When it’s simple, I’ll create separate paths for the deeper cuts so I can slow them down a little. You can also reduce the maximum depth of cut for the tool in the tool database (or in the settings just for that specific job) and then run at a higher feedrate, but I’m still trying to find the best balance between the two…

Has anyone used Oramask 813 on top of Chalk Paint? Or any other kind of paint that would be similar? Did it it work? I’m wondering if it would peel off the paint.

I found a local supplier of Valspar 2nd Skin spray on peel off rubber coating, same product that makes plasticoat, but this stuff is meant to be a spray on painting mask that peels off. I have tried a couple different oramask products and I’m not personally a fan, it doesn’t always seem to adhere properly for me and the finer detail the carve the more little edges seem to peel up on me. so my process was this, I painted a pieces of scrap mishshapen MDF with acrylic black paint, then applied 4…