Hello All… I have an X-Carve 750 x 750, X-controller, Win-10, Homing Switches, No z-probe (yet). I’ve only had it up and running for a few days. i have tried to make a few simple carves with easel. When I Home the machine its a little off of the little circle deal in the bottom corner of the waste board by a couple mm. Anyway when I hit carve the machine spends a half hour milling air on top of my stock. Don’t get me wrong, it milled the hell out of that air, but I really would like it to skip that part and get straight to milling wood. I am also familiar with fusion 360 so I did a design in that and sent it through via UGCS and had the exact same result…(scratches head). I’ve been trying to figure this out out on my own for the last 4 days straight. I’ve read every post I could find and have tried everything I found with no luck. Any help would be much appreciated.
Thanks,
Mike

Are you setting your Z zero position to be on top of the wood? You should set it so that you bit is touching the top of the stock, set Z zero, and then start carving.

Yup I set the z on top of the wood.

Will do on adjusting the switches and Ill look into the Triquetra 3 axis probe.

ok how do i do that?

How are you setting the bit on top of the wood? Are you manually moving the router in place by turning the ACME rod or are you jogging the machine using Easel and/or UGCS?

So, my setup routine (without using my 3-axis plate) is:

I might have missed something but that is the type of detail we’d need to be able to help you figure out what’s going wrong.

Settings within Easel for Z-axis rod (Lead screw)? Within machine setup did you select the correct one Acme or 8mm?

Post the first 20 lines of your G-code file here. 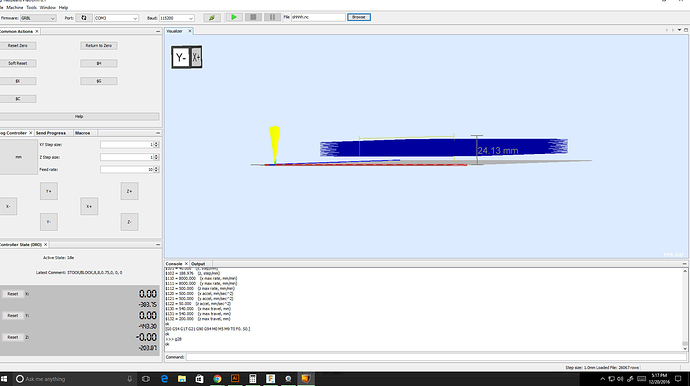 Im using the f360-easel. Ive tried generic grbl also. Is there something else I should use? Are we on to something???

Yeah, you have problems here.

Suggest you remove the T1M6 when using grbl.

This says that you are going to raise Z about 2.5 inches and then start carving. That what you see?

That was just a side issue.

Your CAM program, is where the problem is. It is generating G-code that causes the problem you are having. I’m not familiar with the software you are using, but that’s where your problem is.

Maybe someone else here can help with that.

It might be that your coordinate origin for your CAM setup is different than your work origin. Fusion let’s you select the corner for the origin. If you have the origin at the bottom, it’s assuming you zero off the waste board and not the workpiece.

You can also have Fusion remove the M6 line by telling it the bit is a manual change.