I have read through every post I could find about homing issues and none of them seem to be the same as mine. Machine connects, then starts to home - the spindle assembly seems to be able to move on all three axis, and the work tray will move on both X and Y, but when I hit home it just goes all the way up the Y axis. It does not hit the rear wall, but stops just short if it and pauses for about 15-20 seconds at which time an error message pops up telling me it ‘failed to home’. I have disassembled and cleaned the smart clamp, cleaned out the machine and made sure there are no obstructions. Still just does the same thing.

I contacted tech support but it seems like the community is a better way to go here. Anyone had a similar experience?

Is this a new problem? New machine? Sounds like you’re describing some extra motion. The wasteboard should only move forward and back (Y). The spindle should move left and right (X) and up and down (Z).
Is the first thing that moves when you home the Y? Maybe the motors are connected to the wrong driver on the controller?
Definitely a support issue if you’re under warranty.
A little more detail will help diagnose. Where is each axis when you start homing? I’d say center everything before you turn the machine on.

Thanks for responding Neil.

Currently only the tray moves on it’s Y axis, and yes that’s the first thing that happens. The machine spools up, the wasteboard moves up the Y axis but does not contact the rear wall, then the homing error pops up. The spindle can definitely raise and lower on the Z, it had to the first time I attempted homing because it was not in it’s home position after moving to my new facility. It does seem to be struggling to move along it’s X axis.

One thing I noticed this morning: I have two Carveys and the one that is currently operational will not let the spindle assembly move along it’s gantry when the machine is not working. There seems to be a motion lockout; where the other machine (malfunctioning unit) doesn’t seem to have that. I can move the spindle manually on it’s X axis, albeit slowly.

I am nervous about breaking down the spindle assembly because I don’t know what I’m looking for once it’s opened up. Any advice?

Not a new machine, has seen probably 2 years of service but I had not used it in a few months following a change of facilities. When I set it up again the first time it homed properly and started a carve, then went off course and damaged a clamp. It did not respond to ‘pause’ or ‘cancel’ commands from easel, so I was forced to power down the machine before it started milling into it’s own smart clamp

The issues I have been having have all been since then. I have replaced all drivers to make sure it wasn’t a software communication issue, so it seems likely that the problem I’m dealing with now is a mechanical issue - maybe even caused by the emergency shut down.

The motion won’t lock until the machine has been homed, so that’s normal.

Is the Z axis on it’s switch? With the the machine off, turn the nut by hand to lower the Z to make sure it is off the switch.

Does the X-axis move smoothly? If you reach your hand up behind the plate with the X-axis rods, can you feel a decent tension in the belt?

Can you get a video of the homing process? Put a magnet on the right side to simulate the door is closed for the video.

Z axis can be raised and lowered manually, if i lower it down then Home it raises on it’s own, then the wasteboard moves up Y, but the spindle does not jog along the X at all.

Tension on the belts feels decent, but it is difficult to manually move the spindle. I can do it, but it requires more effort than I would expect with no motion lockout or brake. I will try to post a video later today.

Can you unlock the Carvey on startup (send $X) and try to jog that X-axis?
What error code/message are you getting (check the console)?

I have to apologize for not being very technical. I am not very proficient in computer technology so if you could provide some direction on how to do those things it would be helpful. I use the Easel software to interact with the Carvey so I only really know how to select ‘machine’ from the header menu and then have those options available.

If you can explain how step by step I’m usually capable of getting there though.

Here is the error message: 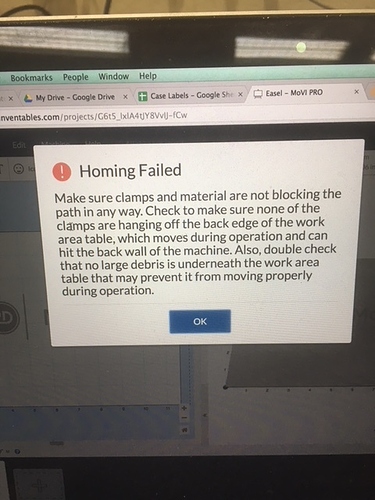 Shut down after that, so it’ll restore default modes in case you changed something.

If it moves, i’d guess you damaged or disconnected the X limit switch (about 100mm from left side of machine, behind plate with linear rails).
If it doesn’t, probably a bigger deal.

Sorry I don’t have access to the machine on weekends.

Tried those inputs this morning but unfortunately no movement along the X axis. Y and Z both seem fine. I think I will have to start opening it up and hopefully there is a visible issue preventing lateral movement.

Any recommendations on where to start?

no movement along the X axis

Shoot!
I was hoping that was it. Can you test the limit switch response with the machine inspector in Easel?
Trying the commands to jog I gave you earlier, can you jog the Y?

Any recommendations on where to start?

The small panel on the back will give a good view. You might try, with power off, swapping the motor connections for X & Y. If the Y still homes, you know it’s not the controller or driver (might still be a switch issue).

Using the same commands the Y will jog, and I noticed on reattempting the X procedure that it does attempt to move, there is a single effort (which I can hear) for about 1/2 of a second but no actual motion along the gantry.

If you pop that back panel off, you’ll be able to see the X-motor (left side when looking in the back) and all the connections. I doubt anything came unplugged, but make sure you do this without power. It should be fairly easy to see if there is a mechanical issue on the X.

that it does attempt to move, there is a single effort (which I can hear) for about 1/2 of a second but no actual motion along the gantry.

Do the audible stepper sound vary in length, as in short for short jog command / long sound for long jog command?
If so X is either binding or unconnected mechanically.

If the duration of the sound is equal then I suspect the stepper driver.

OK looks like the X and Y limit switches are active (not sure if they are working properly) as I can get both buttons to register in the machine inspector so long as the X and Y are both pushed to their furthest position.

I can no longer hear a sound when I try to jog the X, and I’m not certain if I really did yesterday or not because my shop is often loud. This morning I tested it in complete silence and I don’t think I can hear it make any effort to move. It still slides well manually, and all connections appear intact, but I’ll post some pics so you experts can let me know if anything looks incorrect.

Ive also snapped a few pics from the machine inspector in case something is off there. Ignore the ‘door open’ warnings as those were me actually opening the door, and there is a pic where the X or Y or both buttons are active - this is because I moved both to those positions.

If anyone has any advice it would be appreciated, I am really pulling my hair out over this thing. 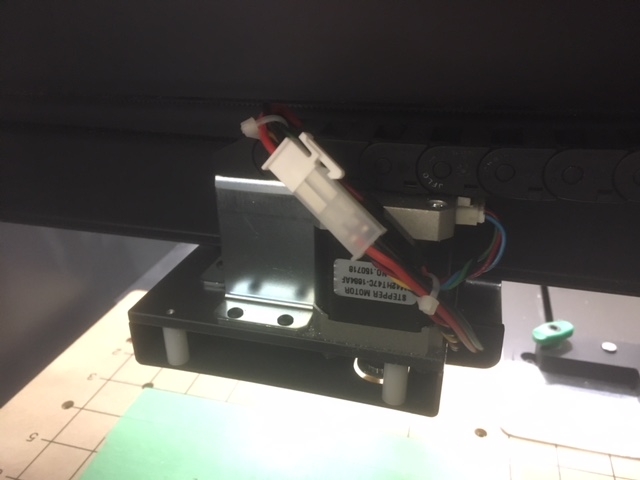 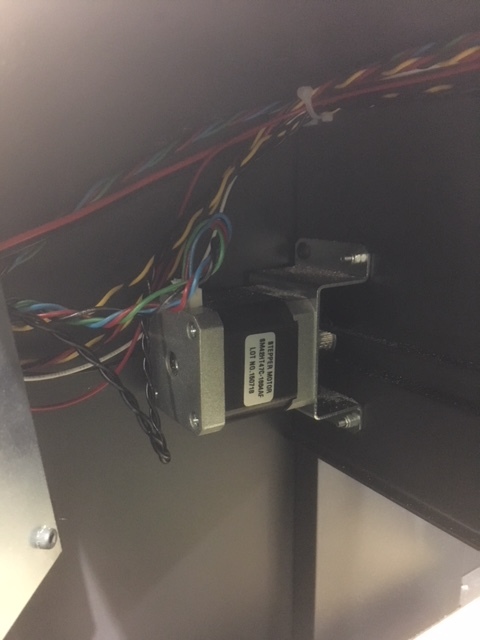 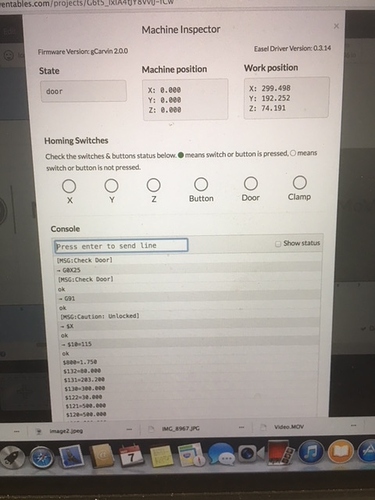 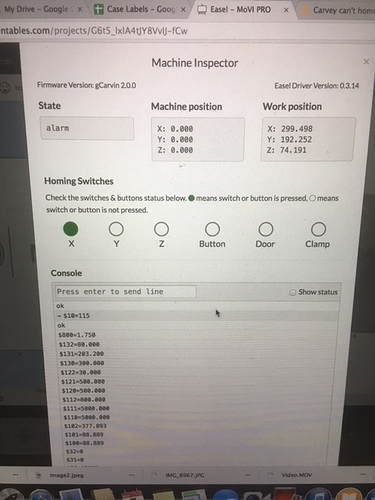 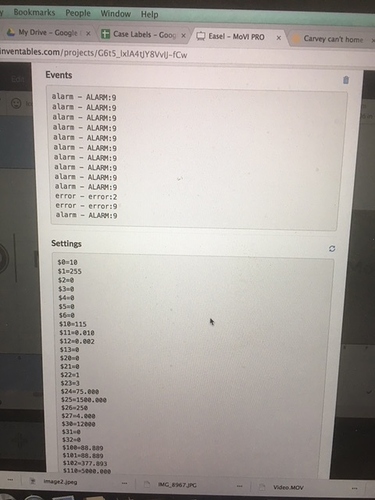 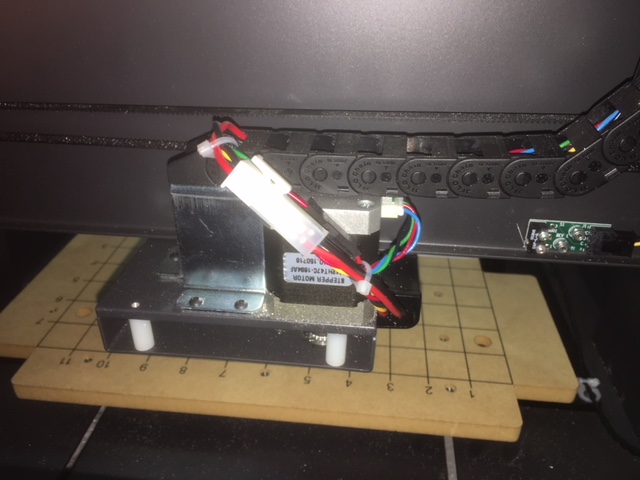 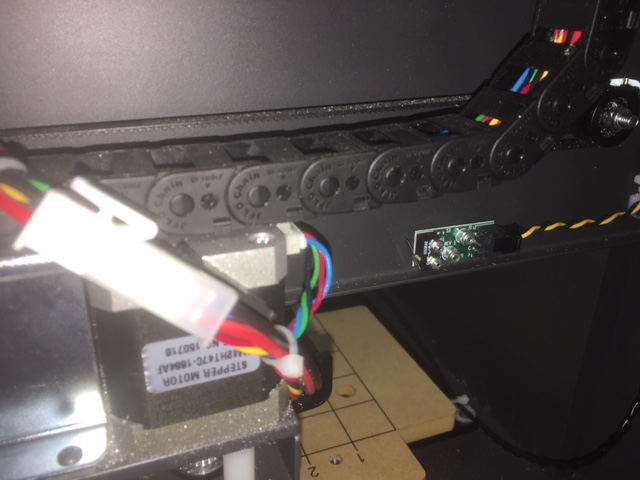 This morning I tested it in complete silence and I don’t think I can hear it make any effort to move. It still slides well manually, and all connections appear intact

With machine on, and pushing the axes by hand, do X slide noticeably easier than Y?
If the driver is fried and motor get no power there is considerably less friction.