Started a project and received a home fail message. I’ve gone through routine of making sure there are blockages, cleaning the whole machine, checking switches and wires. Turned the machine back on and the spindle took a nose drive into the waste board. Getting error: 2, ALARM: 9 If anyone can help me it would be much appreciated. Thanks.

took a nose drive into the waste board

Fast?
Or was it one of those controlled nose dives that had you mesmerized?
Does the same thing happen if you try again?

It sounds like your $3 may be set incorrectly regarding Z direction being inverted. (which could also be resolved with re-wiring as Neil touched on…)

When you perform manual controlled movements does the Z go the correct direction as commanded? (up is up, down is down)

Thanks for the feedback. I think I’ve got it isolated to the Z axis. It’s the only one that won’t move when I try to move it unlocked. The nut tries to turn, but no movement so I’ll need to get into it. I’ll post an update on how it turns out.

The nut tries to turn

Does it turn? Or just jitter or hum?
Those would indicate different issues. The XZ assembly is not an enjoyable teardown and rebuild unless you have hands the size of a 3yr old. If you get to that point, I’ve been there and I may have taken pics.

Your $3 setting would only be an issue if you explicitly changed it. The Carvey is a different animal than the X-Carve.

The Carvey is a different animal than the X-Carve.

Yep, I didn’t even read the topic.

I see the nut start to turn then stop. The actual height does not change. Any additional pointers would be great. I was just getting started on some small jobs.

Can you get a video of what happens when you try to jog? Try to jog like 25mm at a time rather than one.
Can you check the pulley on the underside? Doubtful it’s doing anything different, but it’s good to rule out.

I don’t know if you see the video I posted, but after wrenching the spindle down and then choosing “home” the spindle goes to the top then stops and hums.

I’m not looking at a Carvey. Was that the top of its travel?
Can you jog back down after that? Once you get away from top or bottom, can you jog a few mm under control?
Seems less like a wiring issue based on that vid. Maybe the Lead nut on the Z is loose?

I took that video this morning of through the glass of the Carvey. I can jog it around, but the video is of it when trying to home. It just stops at the top.

Does the Z-switch register in Easel?

Would you happen to be able to tell me how to get to it?

The Z uses a phototransistor, an optical switch. I’m not near the Carvey, so I’ll send you more info tomorrow.
It’s unlikely the switch suddenly went bad, so see if you can get a picture with your phone of the connector on the back of the Z assembly.
I’m sure you’ll be able to see more if you remove the front/bottom plate on the Z. I don’t remember off hand what that entails.

Here it is from the left side of the X/Z carriage. 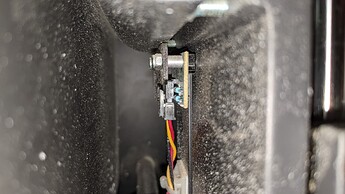 To access the switch to test, you’ll have to remove the spindle and mount and remove the front plate of the Z. 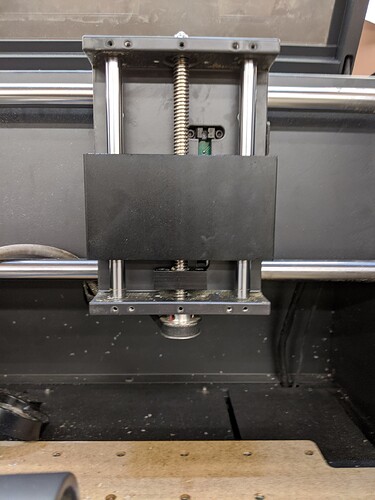 Back in Business! Wow, thanks for the photos. It turns out that the Z was not homing because is was not quite reaching that switch. After wrenching the axis back and forth to the top, cleaning the screw and lubricating it, things are working normally again. The screw was extremely dry. Thanks again for the great help!