Carvey Y-Axis Calibration Issues - Anyone seen this before?

I am currently doing some simple tests to verify the operation of the Carvey CNC, I am milling a simple 1"x1" Square in Plywood - I have provided an image with regards to the tests and highlighted the area in the image that concerns me. It appears that the Carvey Y-Axis is misaligned or oversteps - I think, although I am not sure as to how to proceed to rectify the issue. I will be emailing Inventables support with regards to this issue shortly.

I have searched through the Carvey forum, but I did not find any other posts with a similar issue as mine. I am providing a photograph of the misalignment / overcut / mispositioning. I will be continuing to test and troubleshoot this issue, although I hope that someone may have some insight into how to rectify this issue.

I look forward to receiving some direction in an attempt to resolve this issue. 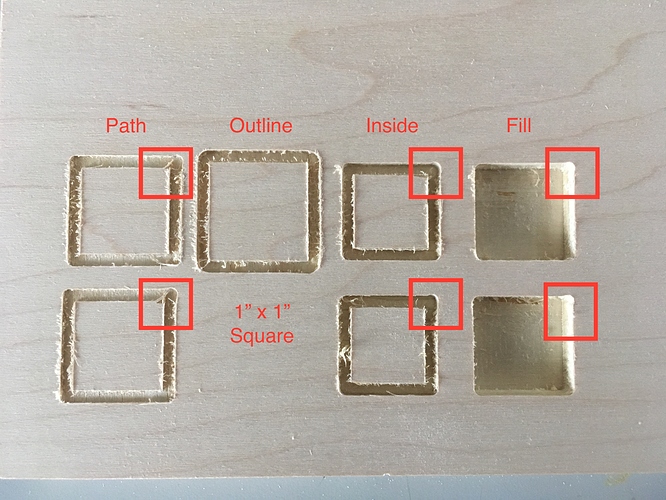 If that spot is where the bit plunges in and starts the cut, slow down the plunge rate, as Phil is saying, the bit will flex if it is pushed into the material too quickly.

OK. I will attempt the tests again with a lower Plunge Rate and Feed Rate. Yes, the spinning bit definitely “rings” when the Carvey pulls out at the end of the mill. Oddly, I am using the Easel recommended Feed Rate and Plunge Rate for Birch Plywood along with the 1/8" Straight Cut Bit.

I will lower these parameters and try it again.

Thanks, will report back with my findings

If you get the plunge speed dialed in, you will probably be able to bump the feedrate back up as endmills cut better on the side as it moves through the wood than the end.