Carving marble instead of wood

So I thought I’d try something other than making sawdust…

Bought a piece of polished marble approx 300mm X 400mm X 15mm. Depth of cut was 0.5mm per pass. Feed rate was 50" per min (apologies for mixing metric and imperial), step over was about 5%. DeWalt was on speed “4”… Cut dry using a 90degree VBit (one of these http://www.toolstoday.com/p-6015-in-tech-series-insert-v-groove-router-bit.aspx).

Cut it dry because my waste board isn’t waterproof. Job took about 30 mins in total. Surprisingly, the carbide bit is still razor sharp and completely unscathed. My rudimentary dust collection system still picked up 99% of the dust so cleanup was essentially nothing more than a wipe with a cloth (the second picture was taken immediately after completing the cut, no cleaning or blowing done)

Filled the cut with some 2part resin coloured black. I think I liked it better unfilled, but I suspect if the board is used, it’ll just fill up with gunk.

Reasonably happy with the result and can see me doing far more stone work in the future. Just though I’d post this to help inspire others… 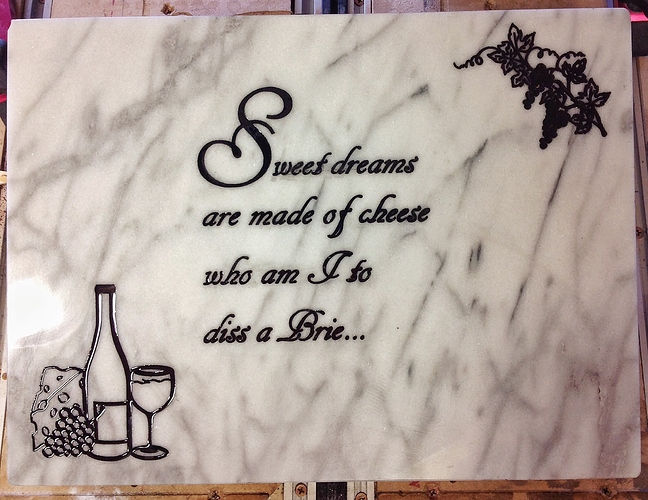 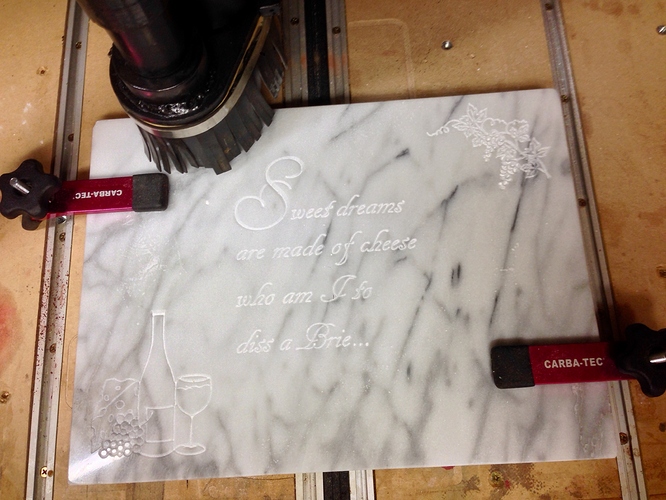 Cool! What was the total cut depth?

Depth was probably around ¼", although as it was done using VCarve, it’s not something that’s set explicitly.

That really turned out nice. what did you use to clean up the excess epoxy on the surface?

I used a plastic scraper to spread the liquid resin and to remove most of the excess. When it hardened, I then used a metal scraper to remove most of what was left and some general purpose thinners to give it a final wipe (avoid getting the thinners on the resin inlay itself because it will mark the surface finish). Cleaning up the excess is much easier on such a hard surface, particularly when it’s been polished.

When I first added the resin, I apparently didn’t mix it properly because there were some bits that wouldn’t harden. It was surprisingly easy to remove the resin with a scraper and some thinners on a cloth. The second batch worked fine.

I’ve found that scraping the resin off while it’s still liquid, means that when it hardens, it will shrink slightly below the surface. This allows it to retain it’s glossy surface if you need to sand or polish the surrounding area. If the resin itself is sanded, I’ve never been able to get the gloss back, even with 1200 grit wet & dry paper.