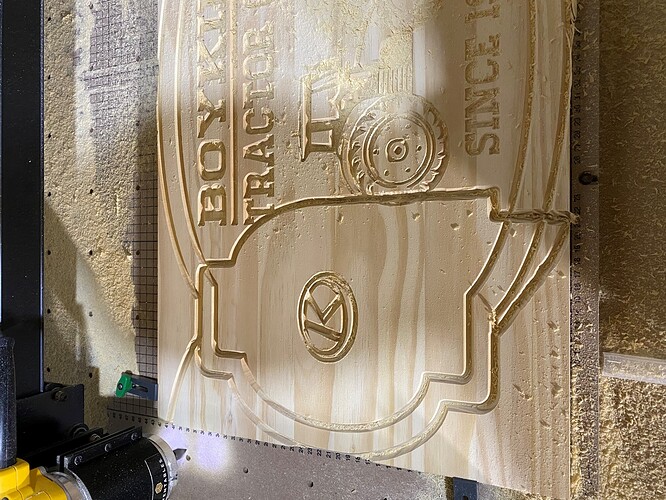 I have seen some similar post about going off path but they are dated and figured I would start new. I just received machine last weekend and only made a few carves. The carve in the picture was going great until the end when it was cutting the outside edge. After about 2 hours it decided to loose its coordinates and well you can see. I have carved since with no issues.

I suspect something bogged up and provided more friction than your machine was able to overcome, hence loosing steps. Did you try a cutout with a V-bit?

@HaldorLonningdal you were right on the bogging. I could not duplicate after last cut. I continued trying more cuts until I saw it happen. The carriage was bogging on rail. Still not sure what caused it (maybe dirt on rail) It has been cleaned and no issue since. I will continue to watch.

Its important to realise that stepper torque vs rpm is a falling curve. The faster it spins the less torque is available. Eventually the torque curve meet the RPM curve and the stepper will stall out with no load at all.

Since your machine seemed to skip during jogging which is done at max rapid rate suggest marginal performance at given parameters which is then indicative of something holding it back. Dirt/debris can certainly do that. While jogging only the force of motion is apparent.

When carving at slower speeds you have motion forces + whatever cutter forces you´re dealing with.
Again, at a certain point the two curves again intersect, obviously at a slower pace than pure jogging.