I’m trying to carve a large text with a 1/16 bit, but the machine won’t carve certain sections for being “too small”. Clearly the letter is wide enough for the bit to be able to do it in one pass. If I change the setting to “outline on path” it will carve no problem, it just won’t do it with the “fill” option. Any ideas how to fix it?

Any help will be appreciated. 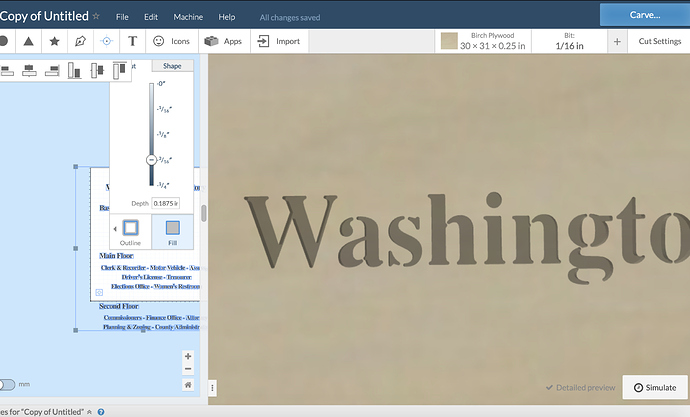 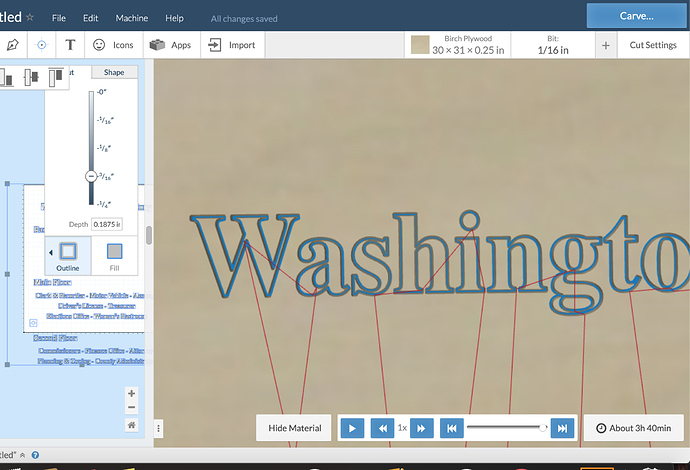 Or increase the size of the letters

I would measure your bit as it’s unlikely actually 1/16" anyways. But similar to what Wayne mentioned, you could trick Easel by reducing the bit size until it carves everything you want. I would carve part of it in a scrap piece though as it may not look like you want.

It should carve pretty quickly though with a V-bit if you decide to go that route.

OR use both the 1/6" or 1/32" bit then do a bit change and run your v-bit. Likely the V-bit ONLY route is that the very tip of the bit has to cover the entire bottom area of your letters that is why you time is so high with it, this is a two bit carve for sure.

I wish there was just an override to allow the g-code to be created to run 1 pass down the middle (or tight to one side) when the pocket is smaller than the bit.

I understand that it wouldn’t be exact, but it looks better with some cut rather than no cut when the hangup is over a few hundredths of an inch.

That’s where the CAD portion of the CAD/CAM process comes in. Model that imperfection.

True. But it’d be nice to not need to draw a bunch of lines all over the text in the CAD side just to get the CAM to “ignore” minor deviations. A tolerance setting as it were.

If I’m cutting a pocket and plug for an inlay = tight.
Some general text cut in a piece of pine = loose.

There is nothing wrong with pining for more tools in the Easel toolbox.

There is nothing wrong with pining for more tools in the Easel toolbox.

I get that, but that’s a tall task to ask Easel to do what industrial manufacturing doesn’t (that I know of).

What if you ran the pocket and then ran a profile (inside path) just on the letters that have the problem?

You just described an elegant solution that could be coded easily.

The cool thing about CNC and computers in general is that they are great at following rules… at least until they become self aware anyway. If you can come up with a set of rules for what you want to do, you can make the machine do it. That is the whole point. Make the machines do the menial repetitive tasks.

Kind of, just picked something to show the computer logic. A simplistic representation of the idea.

I don’t know what the real code looks like. I think this stuff is written in python?

I’ve spent a long time making Excel spreadsheets, lisp routines in AutoCAD, and am now messing around with Dynamo scripts in Revit (they are python based). Each one is about learning the syntax, available functions, and structure of the program. The basic ideas are the same but the “language” varies widely.

The V bit will take 5 hours to carve

V-carving will take a lot of time if the tool path isn’t optimal, with V-bit carving stepover is small (5% default) and coupled with conservative depth per cut the total path length will grow very fast.

Knowing your system is key, I would try on a single letter to establish a good combination of the above (feed rate / depth per pass and step over)

Jugding by the pictures alone these letters aren’t big (2" tall or so?) and cutting the time down shouldn’t be hard. Please share project as Neil ask for, this will help us a lot to make suggestions.