I haven’t really had issues centering… however, lately I have… I am cutting coasters right now… however, what’s showing in easel and what’s coming out on the piece is way off… I have had other pieces that this has happened to, however, I am just posting these two pictures for a better idea… Brian 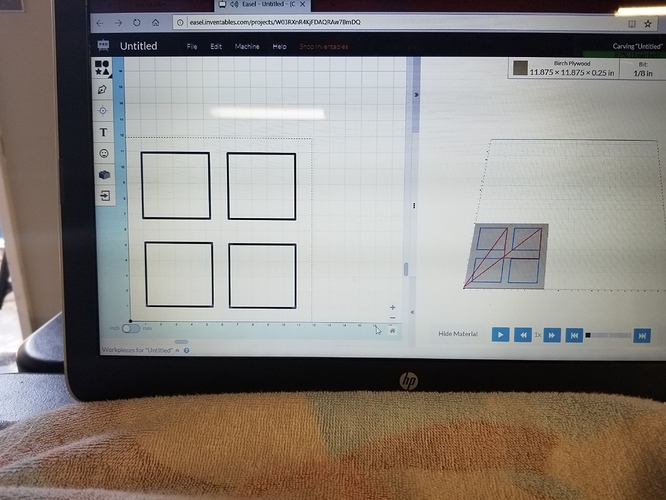 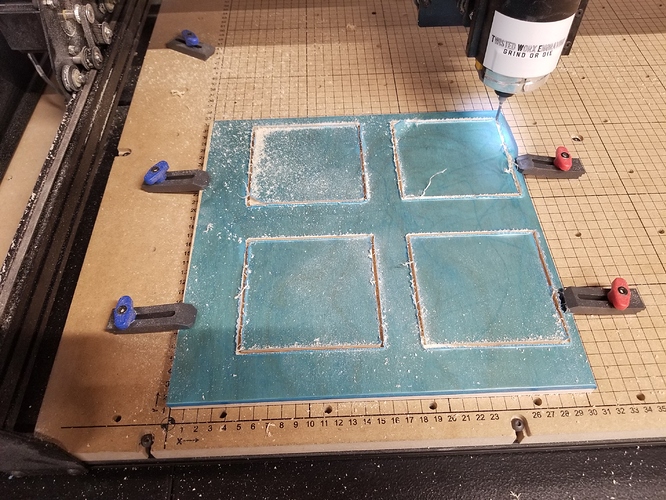 Where did your router end up when the carve was complete?

where do you zero from?

I did a 20x24 wedding sign last week and had the lettering center right on dead center and when it was done everything was off to the right .5". Used the 3 axes block to zero so i know it was right. I have been using picsender since but i think it is in easel.

I zeroed from the bottom left corner… Everything has been good until this last week. I have done nothing different… same as usual… so I am not quite understanding what’s happening here

@BrianRodriguez are the dimensions of the squares correct? As Russell said, when the carve is done, where does the router’s position end up? Over the front left corner?

are the dimensions of the squares correct?

I have made sure everything is tightened, so that’s good

Did you use the center material in easel?

I noticed the center to material option is off and a carving I am doing is way off.

That is what i was using and it was off .5" on my project. Thing is it was also centered in the grid so i think it is an easel error. I might be wrong but i know how i set the zero on mine and how it was set up in easel it should have been dead center and it was’nt.

I am not sure how far off it is because it is still carving. However, not everything is off and some things have crossed over other previous carvings done earlier today. It’s a multi carve using pages. I will put a photo of the finished carving tomorrow.

And just ran a test

What test?
Can you share the Easel project and/or the gcode?

Here is a video of two pieces I have attempted. The one on the left was before the xyz position upgrade on the home screen and the one on the right is after. Not sure what changed or if it is operator error but, the “Center to material” menu option seems to be in error.

Exact same problem i found. Everything was off to the right.

Absolutely!! I have done everything the same as I have since I have had my X-Carve… With the exception of a couple of minor things, it has been great!! I haven’t had this issue before, just started this past week.