Cheap and easy temperature testing for the stepper motors

I have found these watertight DS18B20 sensors and intend to bind them with cable ties to the body of the motors.

Each sensor comes with the chioce of 1-2-3 meters of cable I chose 2 meters and bought three and three plug and sockets.

At the moment this is just in the Project phase but it looks very do-able, I will update as I get Things soldered.

Hey Neal - If you have access to an old Mac that someone has pitched, there are numerous temp sensors inside that can be read by an Aruidno using I2C and linked together (using only one connection). Let me know if you want more info - I would have to find the code.

These sensors will adhere directly to the motor and are very small.

I think you may be over complicating it…

The DS18B20 are good for environmental temperatures (weather stations, water temps… etc) but not so good when you want to stick them to something… Thats why 3D printers use Thermistors to control their hotends and heated beds.

You can actually just buy the ones for 3D printers…

Find many great new & used options and get the best deals for 5pcs RepRap NTC 3950 Thermistor 100k With 1 Meter Cable Wire for 3d Printer at the best online prices at eBay! Free shipping for many products!


Then tape them onto the stepper motors with some Kapton tape. (it will look nicer then zip ties

Your looking at under $20US for the sensors, Arduino and LCD.

Let me know if you need any help/code/examples.

I have bought 3 of these

my thinking was that these would be dust proof,

Ideally I would like a screen over each of the axis plugs, I know you can parrallel connect these screens,
I will experiment with the wiring and the coding when i get around to it.

Yah those would be great to make a sous vide machine! Thermisters are cheap and easy, though you will never get an accurate reading without painstaking calibration along a curve of widely varying temperatures. TMP75’s are free if you can cannibalize a dumpster mac and are I2C and very accurate. Not to be confused with TMP36’s which are analog and only marginally better than a thermister.

I cheaped out and bought pc cpu thermometers.

you can use them on the spindle and drivers too.

i like the arduino idea. could add overtemp alam easily too, auto cycle among sensors, so many things you could that way 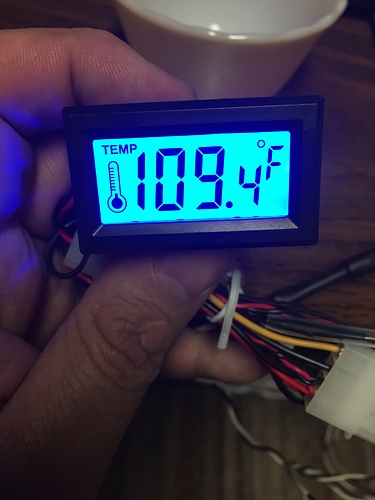 Got all three of ya beat