Circles are way too choppy

These are circles drawn in easel with diameter 19mm and 5.9 mm. I need to fit a round peg in a wheel so I did some sample cuts and they are way too choppy. Does anyone know how to get them to look better? 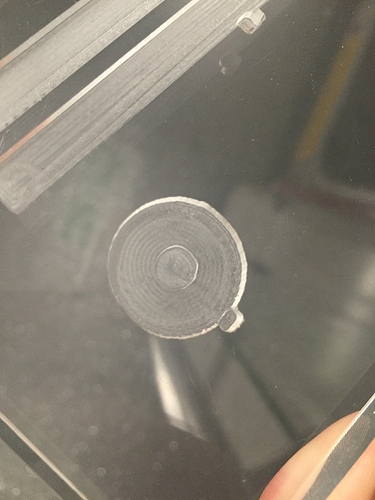 It’s acrylic. I just chose the default setting in easel and the bit that came with easel.

I can try a smaller bit and slower feed rate, but I suspect it’s more of a tool path problem as the shape is consistently out of shape during each depth pass…

i don’t think the toolpath is the problem. I think your cutting parameters are wrong, or maybe a bad wire somewhere that makes one of your motors run choppy. Try the same file with a sharpie on paper and see if that gives you a clean circle.

“The bit that came with easel” … not enough information.

What kind of bit is it? What size, how many flutes, upcut, downcut or straight? How long is it? Is it full carbide, HSS, carbide-tipped, coated?

All these things make a huge difference, especially when you’re cutting something like acrylic.

It looks like your circles are choppy because your bit is deflecting (bending side-to-side) as it cuts. This is usually caused by trying to move too fast through the material. Either the bit can’t clear the already-cut material away fast enough, or the material is hard enough that the bit bends before it cuts.

Try slowing down the feed rate, using a shallower depth of cut, and if you can, slow down the spindle or use a single-flute bit.

Are your belts tight, enough current to y-axis, etc? Similar problems with any other material? Have you done any of the stiffening mods? Grab your spindle and try to “wiggle” it, it should not move other than along the X axis and Y axis. Any play needs to be fixed, see all the posts about stiffening the x-, y, and z, axes. Could be something as simple as your V-wheels on the z-axis being too loose.

The first time I cut acrylic with the “default” settings, I found that it was much too slow of a feed-rate, and the acrylic would just melt and form a gummed up mess that made clean cuts impossible. Don’t take my word for it, but you’ll probably want to use a single flute, upcut bit for this. Using a 1/8 bit I increased feedrate to 50 or 70 ipm with my 611 set to speed setting 1, and decreased my depth a little, and got decent cuts. At those feedrates you will have to make sure your machine is stiff enough to not flex.

Thanks guys for the suggestions. I switched to a 1mm end mill with a slow feed 100mm/m depth per pass 0.1mm and the circle turned out round.