Trying to convert a sentence of 20 words or so into a circle. The app in easel is rubbish, can anyone work it with more than one word and get a readable image? Does inventables not have some sort of quality control?
Can produce 2 semi circles in path warp but would rather have one continuous circle.
I can produce what i want in other programs but the quality of the import is very poor, svg and jpeg.
Any bright ideas/suggestions for a straightforward and editable solution. Thanks

Create your letters individually. Then use the circle app

quality of the import is very poor, svg

An SVG should import exactly as created. Got an example of an SVG you created that imports poorly?

thanks for the responses gents.
Paw Paw - i’m looking at 100 or so characters so unfortunately not a practical option, but thanks , i have watched your video too.
neil - sorry getting issues mixed up. both were converted from same word doc.
jpeg via image trace was not fantastic. easel import wasnt happy with the svg and wouldnt import it.
looks like I’ll need to look at inkscape or similar

quick update. looked at word document again and there was a few randoms throwing it off. cleaned it up and converted and got a result. will post image once done. thanks again. 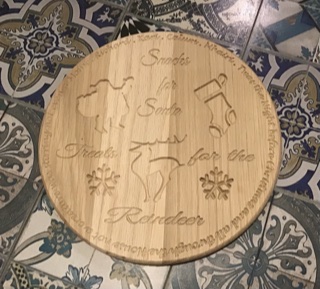 both were converted from same word doc

How are you creating an SVG from a Word document?

OK…that’s different than creating an SVG and importing it.

looks like I’ll need to look at inkscape or similar

I think everyone here should learn at least a little Inkscape

Cabinet maker learning computer software! What could go wrong?
Point taken, Inkscape already downloaded, is it easy to learn? Thanks.

@RichardLeather, if you can Google, you can learn Inkscape. The better links often are YouTube videos, although I’m more inclined to look for text answers than to listen through a 20 minute video for one specific tidbit.
For your project, I’d expect a search of “inkscape text on circle” will give you bunches of answers. Some of Inkscape is intuitive, other parts not so much. There are some great extensions (aka plug-ins) that work only on versions prior to 1.0, but one can have installed both versions without harm.

I do most of my lettering , circle, wavy etc in adobe illustrator, create outlines and export the svg.
Never had a problem.

Illustrator has been around for a bit longer than Inkscape, but that’s just a guess. I recall references to the program (AI) going as far back as the last century. The internet says 1987, but who believes the internet? I don’t think the same can be said of Inkscape, but there is a bit of a price difference ($$$ vs free) that makes Inkscape a good option for many.

Thanks everyone for your input. I take it the app developer isn’t around any more to address the issues.

Thanks everyone for your input.

Thanks everyone for your input.