Clean up path too deep

I use Easel with my Millright Carve King.
I am having a problem with a project that when it goes to do its “clean up” pass it seems to drop the Z a hair. It has now done it 7 times. Pass depth doesn’t matter. Speed and feed don’t matter. It has to be an error in the generated paths. I even deleted the whole thing and drew a whole new project that matched in appearance and it still did it. The rest of the project is smooth as glass. Any ideas why? It’s killing me to see a good project get wasted with this. I’m a small operation and this is costing me big on wasting good lumber.

It has to be an error in the generated paths.

I don’t know how to get them from Easel.

Thank you! Now how to do I convert to something readable?

This is most likely something mechanical or something with your workholding.

I noticed that. But why would it go deeper on a single path across the piece? The same place on multiple times? It just doesn’t make sense. I have run a carve to “plane” down surfaces in between those carves and the surfaces always come out perfectly flat. I could see that (mechanical or workholding) but the error is always the same place on just this project. No others.

Can you be more specific? Where is the error?

Are you clamping your work with side pressure? As you carve, the wood may tend to bow. When you come back to a previously carved area, the workpiece is higher.

I double side tape my piece with super glue.
It is a pass to “clean” up between 2 other passes. Imagine 2 paths an 1/8 inch or less apart. The pass that seems to go deeper is the one that cleans up the left over between those two paths. It runs about 17-19 linear inches of a 9 by 17 inch piece of wood.
I understand the flex that can be involved and have seen it pop up here and there but nothing so predictable and specific as this. If I had a pic I would show it to you.
At least I know it isn’t the g code now. 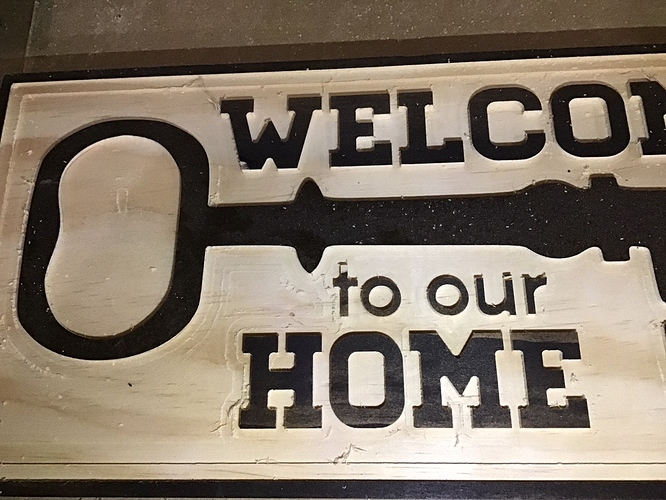 The line is fairly obvious. Notice it is only in that one line.

I’ve never seen a Carve King. Does your Z have any up down play in it? Can you push the spindle up by hand at all?

It looks much more pronounced on the left side. Are you sure there was no issue with work holding? You’re removing a lot of material there. Wood (pine?) will do all kinds of things to release the internal stresses.
I don’t know enough about the Carve King mechanically to start guessing.
(But I will, I guess)
Do you have dust collection?
If the Z is solid, you may have issues with your driver current if it’s only happening at the end of the job.

After the roughing the pocket floor may rise slightly because the wood have room to expand into.
If the router isnt 100% in tram it will compound on the issue.

I did find that my Z had a slight misstep when raising. Fixed that and I don’t seem to have that issue as much. There are so many variables in CNC it makes it hard to find the actual problem.
Thank you for all your input.