I have used services that can cut based off of the color of SVG entities.

Maybe a good one to add would be to call out on-path, outside, or, inside cuts by color? Basic red, green, and blue should be simple to code for.

Interesting! I’ve used laser cutters that divide paths by color, things like “cut through” is red, vector engrave is blue, raster engrave is green or something.

Easel actually already does color encode, but only depth. For example, black gets imported as cut through, and white gets imported at 0 depth. But easel doesn’t do anything to encode the “offset” of an outline.

We could encode both depth and offset by using the same scheme where magnitude (0-255) encodes depth and channel (red, green, blue) encodes type of offset. I’ll draw up a little table when I get to the office. This is a cool idea!

Here are the current and some proposed color coding of features. The first 4 explain how the current system works. The last three are a possible implementation of your suggestion to color code offset. 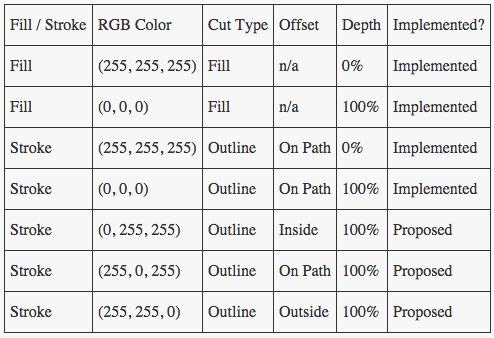 Basically the three color channels represent the three options. If you have two of the channels turned off (255) then the value of the third channel becomes the depth, and the cut offset is the channel that is not 255.

Yes! Although, I was thinking the opposite (inverted RGB values) so that pure colors were used (red, green, blue versus cyan, magenta, yellow).

Yeah that is what I thought at first, but then I realized that because Easel is already importing them “inverted” we can’t really do it that way. (i.e. Easel already uses “white => 0 depth”). I agree that it would be easier that way though. I just don’t want to break other functionality. Gotta think on this a bit more.

OK, I figured that may be the case.

Related question: Are shapes with both fill and stroke (two depths) supported?

Nope sorry only one or the other.

A gradient fill would be awesome to have as a way to slope depths in shapes and lines.