All my computers use Logitech Unifying Software to wirelessly connect the mouse and keyboard. I’ve used it for about four years with never any trouble. Very recently I modified my X-Carve with the Inventables upgrade kit, and I’ve concluded that the Logitech software is somehow interfering with the COM3 port the X-Controller uses.

This behavior only started after the upgrade. It happened with two different computers, and using either Easel or UGS made no difference. The CNC kept randomly stopping in the middle of a project. Easel would indicate an error; UGS didn’t do anything. Unplugging the USB cord or turning off the X-Controller would enable the port to be opened again, but before long it would close again. This behavior stopped when I replaced my mouse and keyboard with wired ones (so far, anyway).

I’m not knowledgeable about COM ports and the hardware side of things, and I may be misinterpreting what I’ve seen. I only know that using the wired accessories, I don’t have the problem.

Thanks for sharing the information.

Could changes in easel affect the port? Even carry over to UGS?

Sure. Anything that leaves the serial port in an undetermined state would cause the next program that tries to access it fail.

If this is what is happening you can use the Device Manager to disable the port, then enable it and the error should be cleared for the next program that tries to access the port.

I may be mistaken, and i am by no means any sort of confuser (computer) wizard, but isn’t there a setting somewhere that will prioritize the different ports, giving one device a higher “importance” than another?

Thanks for your input, guys. I’d appreciate if further developments get documented here; I really prefer wireless accessories.

Probably the “select few” are those using Logitech Unifying Software.

I’m using an el cheapo Microsoft wireless mouse/keyboard (3 of them) without any problems.

This is the message I get in machine inspector when it disconnects. I’m using the Logitech unifying wireless mouse and keyboard as well on an older PC w/ Win7. The X-Controller and the wireless Logitech USB are the only things plugged into the available USB ports. Was getting random disconnects in Easel during carves, now it is only after I carve that it randomly disconnects (can’t jog after a job). I added ferrite coils and grounded my shop vac hose and that so far has helped from the disconnects while carving, but not afterwards. Going to try a powered USB hub next. 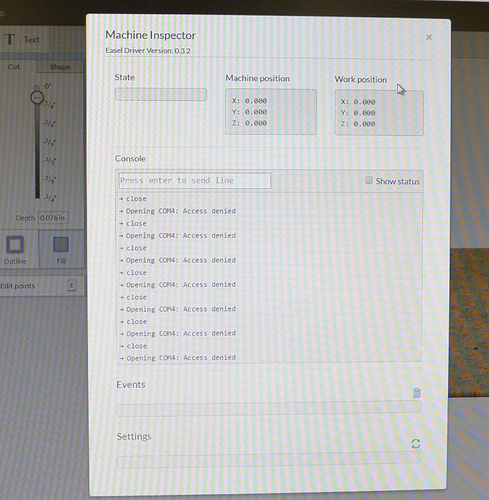 For what it is worth I am still loving my Raspberry Pi 3 with easel local 0.3.2 install and working great with a wireless remote keyboard/keypad. for a little $35.00 system on a chip, a little work and presto, got easel-UGS-Bcnc-Chillipeppr-and others working. only bad thing is no windows only programs like the new 3-axis zero program but I can still use the spreadsheet from Charlie. But hey I can run windows only programs on the Wife’s system.

Thanks, Larry. I’m assuming yours are not bluetooth? I thought long and hard before choosing which way to go. Logitech was already built into my Dell XPS18. It was flawless, and like bluetooth it would handle other peripherals than just kbd/mouse (so the documentation said). I was using bluetooth for multiple things already. And there were some wireless combos for kbd/mouse, but that did kbd/mouse and nothing else. Logitech seemed like the logical choice. For now I’ll stick with the wired ones and hope I won’t have to keep moving everything around.

I still feel like something implemented in the last few weeks did this.

That’s one of the reasons I don’t use Easel and/or Windows 10. You never have a stable environment. Things change out from under you without you even knowing it.

Well, I’m sorry to report that apparently Logitech was not the cause after all. It has started back up again. Died in the middle of a project, and just now as I was getting everything reset I saw the green button change to blue as my computer made the “device disconnected” sound.

Uninstall the Logitech software. If your devices are connected using a USB plug(Logitech bluetooth antennae), you don’t need the software at all.

I will uninstall the software to see if that fixes it. But although it uses a USB plug, the software is necessary to indicate which peripherals you want to use. It’s possible to have as many as, I believe, 8 registered.

If it’s just a mouse and keyboard, you should be fine with a single plug/no software. We run em that way at work on Win7 just fine.

Somebody must have set them up with the software and then deleted it, then. The idea behind the unifying software is that you can have a kbd/mouse at work and one at home and one in the shop and one at the lake cabin and one in your RV, and never have to move them; you just take the computer with you and tell it which peripherals you want to use depending on where you are. I guess if the computer’s going to stay in one place, it doesn’t need the software after the initialization. But if you got a new keyboard, you’d have to install the software to tell the computer to use the new one.

Not in my experience. I simply plug in the usb ant. and the keyboard and/or mouse just work. We don’t swap with multiple computers. You need the software to ‘pair’ both devices to work with a given computer, but afterwards you can remove the software.

Guys, my problem with the machine stopping prematurely continues unabated. It is not a sometime thing; I have only been able to complete one project since I started this thread about a month ago. I’m at the point where my girlfriend is telling me, “Honey, it’s not worth all this frustration. Send it back and buy a different brand.”

When Easel stops, it thinks it’s finished and asks me how it turned out. UGS just stops, doesn’t say anything. At that point jogging doesn’t work, and when I click the port’s Close button I get this:

I close that messagebox, click “Close” again, and it appears to do so. Click “Open” and I get this:

This morning it stopped prematurely twice, and then suddenly it wouldn’t do anything, even after a reboot and all the resetting I could think of. Looking in device manager, I found that I didn’t have any ports at all. No COM3, nothing.

So I switched to another computer again. And sure enough, it stopped again… twice. Here are my ports. COM5 is the one I used for UGS.

I am truly at my wits’ end trying to get this machine to do what I bought it for. Can anyone help solve this before I throw in the towel?

No, and I don’t know what that means, but I just bought it. It’s even still got that “new controller” scent.

I guess I need to search for that, huh.

Thanks, Phil. I bought the X-Carve about 9 months ago, and then added the upgrade when it became available, so I had the arduino at first and now the X-Controller. There is a set of instructions for doing the upgrade, but I don’t remember it taking me through setup on my computer. I do have the drivers on both machines, but going through setup I found one setting needed changing, which is that I’m using the X-Controller now and not the arduino. Maybe that will make a difference. I’m about to find out.