Could be… but, wouldn’t that be happening upon touch (spindle to plate, I mean)? They never come even close to touching…

noise will make it think it had touched.

After the 38.2
What’s the feedrate? Probe distance/direction? Are you retracting after the probe? All of this info will help.
A screenshot of your CNCjs probe settings would suffice.
I tend to guess the same as @Phantomm that your probe is sending a false trigger.
Is this on an x-carve? X-controller?

This is a screen shot of CNCjs: 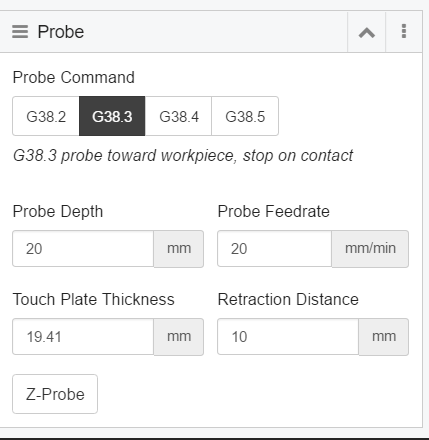 And this is the code actually sent: 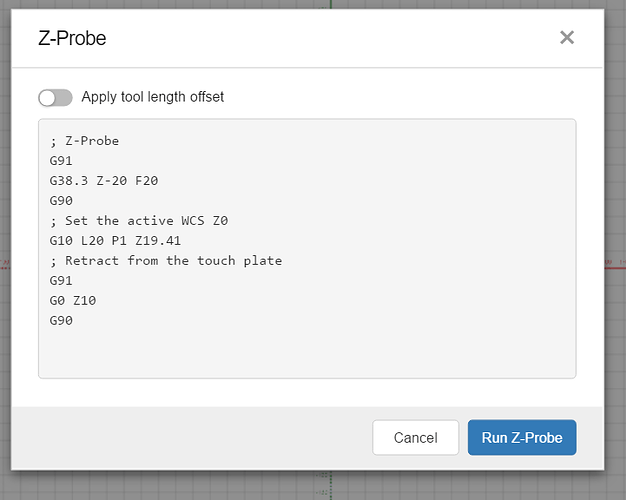 Result is the same with 38.2 and 38.3: Spindle will move downward less than 1mm, and then (without even touching the plate) will move upward 30mm (or so).

Try this filter on your probe input:

Thanks! Will try that filter tomorrow!

The RC filter did the trick

Marino, which way did you face the capacitor? Am I correct in reading the diagram right that the capacitor goes inline between the resistor and probe input?

Ok so it’s like a 3way connection that splits off through the capacitor to ground?

Think think I got it working. I did what you suggested by splitting off the probe input to the capacitor then to ground and I haven’t gotten any noise yet. Thanks for the help.

Please excuse me for not answering before, But my CNC gave me hell today (broken cable in one of the steppers, and installing limit switches, spend the whole day).

I see you got it worked out, but anyways, what I did was to place the resistor in series with the input’s line. The capacitor is connected to ground deriving from the resistor (it doesn’t matter which side).

I was worried for the limit switches, specially whe they didn’t work at first (it was a collection of stupid mistakes), but in the end, they worked perfectly, God knows why…

(it doesn’t matter which side).

It does matter which side. Glad yours is working, but the circuit you used doesn’t function the same as the original configuration.

Sorry for the lousy drawing, I grabed the first piece of paper I came accross with. 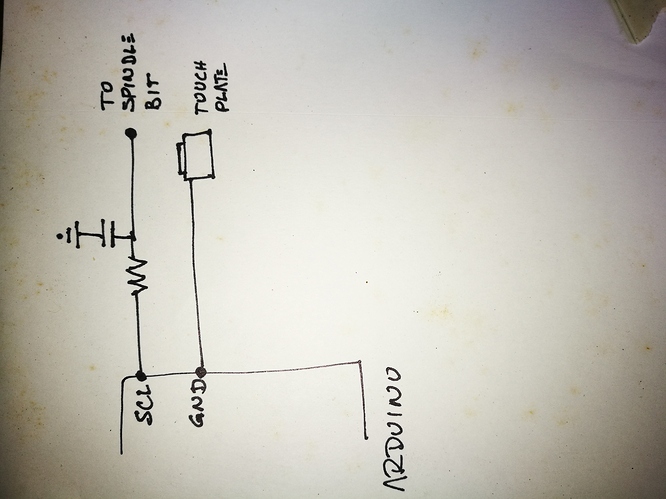 Can you draw something Like I did to show me the right way (I’m an amateur in terms of electronics, and I was very confident that was what you showed): I understood the touch plate to be a switch, and it made sense to place the filter on the Arduino’s input side… Where did I go wrong?

Thanks for the support, man!

This is a better way to do it. Some routers have the spindle/collet grounded.

OK; I’ll just have to swap the connections, I’ll try that.

I use a PCB service to make my printed circuit boards. They have a free schematic capture and board layout set of programs.

If you only want schematic you might try “plus”. I haven’t tried it but they say they have made improvements over classic, but you can’t link “plus” schematics to layout yet.

I’ll just have to swap the connections, I’ll try that.

No, the capacitor should be connected directly to SCL, not through the resistor.

Hummm I missed that, maybe that’s why homing went berzek after I switched…will move the capacitor after I feed my hunger…