Connection issues, is it X Controller or Easel, or PC

I have been using my X carve with Easel for almost 11 months now.
Have had great success with the combination until recently.
Now I have frequent connection issues. Specifically the carve button in upper right changes from green to blue. Sometimes it happens as soon as I click on “turn on spindle”, at this point it turns on my spindle and dust collection and they stay on even thought the connection is gone. The X controller still has power but I cannot proceed with the carve. I have to turn of the controller and turn it back on and connection is restored. But this requires a homing sequence again. Sometimes it happens at the end of a carve when the controller turns off the spindle and dust collection. Again this requires cycling the controller off and on and another homing sequence.
Sometimes it happens when entering commands into the console.
At one point I thought that it was a power issue from spindle and shop vac turning on at the same time. However I have now moved the shop vac to a different circuit with no resolve.
Fortunately connection loss only happened once during a carve.
I have checked my power and USB connections and all are tight. My wifi connection is strong.
So please provide some direction in finding the cause of my problem?
Is my controller failing?

I had a similar problem. For three months all was great then suddenly connection became very unpredictable and unstable. Odds are heavy that you are simply loosing the USB connection but the hard question is why. There are TONS of post on the forum about this. Many suggestions and explanations. Almost too much info!

Hoping for a simple answer I decided to simply unhooked all of the USB cables connected to the computer (had a hub, wireless mouse/keyboard dongle, cable to my phone for internet connection, etc) - swapped cables and connections around and then plugged everything back in. Problem gone. That’s been 5 months ago. No idea what the problem was but in this case cause I could care less - it works now.

USB can be very fickle interface so I suggest just trying this first. If this doen’t help start reading all the post.

Well the gremlin is at the switch again.
Just did 3 carves and first two lost connection at the end of the carve when spindle returned to work zero and shut off.
Third did not loose connection however this error was in machine inspector when I opened it.
Any idea what this means? 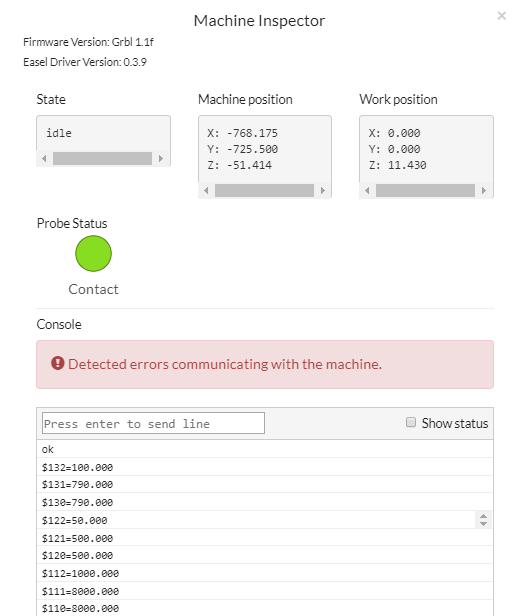 Looks like it detected errors while communicating with the machine. (In Leslie Nielsen’s voice)

Seriously though, it sounds like USB issues. Try a new cable, dust out the connectors, and maybe remove the internal usb header on the inside of the x-controller (it’s been problematic to others in the past).

I have had these sorts of issues for months. I was pulling my hair out. I tried just about every remedy I could find on this forum, but nobody’s solution fixed my problem. In the end, I finally found my problem was the USB bulkhead cable (the one from the X-controller chassis to the mini-USB connector on the PC board inside). I bypassed this with a USB cable directly from my laptop to the PC board, and voila! my problems all went away.

My symptoms were that sometimes all motion would stop while cutting and the software would no longer be able to communicate with the X-carve until X-carve powered off and back on. But another way it would fail was that sometimes when I turned on the X-controller, I would get a popup saying “USB Device Not Recognized”. I discussed this error with a colleague at work who is an engineer familiar with the USB protocol, and he told me this indicates that the USB enumeration process failed in an unexpected manner (which is not a good sign). If you ever see this error popup, it’s not your software or driver, it’s not your X-controller controller board, IT’S SOMETHING WRONG IN THE USB CABLE PATH from your computer to the X-controller PC board. Given the post above that says others have had problems with this cable, too, I would suggest you check that first.