Hey Guys, (and Gals)
I have been having an issue with my XCarve where it offsets everything by 0.2mm.
I know it isn’t a lot, and for sign work, I wouldn’t bother about it, but I need to make some on size parts, but I can’t seem to figure out what’s happening, or how to fix it …
Any ideas would be greatly appreciated.
The Parts are made in Fusion 360 and the GCode is generated fro there as well.
The Tools is a simple 1/8th Flat End Mill.
Example of whats happening :-
So the program is set for a Circle Diameter of 39.4, but it cuts it at 39.6.
as with the OD Cut set up as 85mm, but cuts it at 85.2.
The Depths vary as well. So Supposed to be cutting at 6mm finished, and it cuts to 4.7 or something wacked like that…
I have checked the GBRL Settings, and it was fine for ages, and now it isn’t …
Nothing has changed as far as I can remember.
I have installed a new cutting bit and still the same thing.

Any advice on what to check or test, would be greatly appreciated.
Thanks in advance.
Aaron.

For one, the precision of the Xcarve can reach around 0.1mm
I assume the axes are properly calibrated steps/mm-wise

The strange thing is it just started doing it.
Prior to today, I never had any issues with it being on size.
I am using the same programs, the same tools, the same GCode, but its all offset.
I have been over the tool setup and I can’t find anything that asks for an offset.
I checked to see that there is no wall offsets or anything like that - nothing.
I am only cutting MDF with small cuts each step… Nothing exciting.
I figure there is an answer, but I can’t figure it out…

If you run the same shape, made in Easel/sent from Easel is the dimensions the same as from F360? 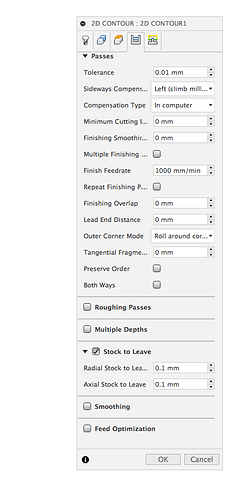 Yeah, checked all that stuff …
I shall try the comparison thing tomorrow at some point.
Didn’t think of that…
What do I do if they are different ? hahaha

What do I do if they are different ? hahaha

(as in some hidden box to check/value omitted etc)

I am now at a lose totally. Other than making everything the wrong size in the program just so it cuts it right seems like a bad idea … these are test pieces for a client sot hey have to be a s close as I can get before we send them out to get machined in steel and various other metals …

Is there a way to test GCode with dimensions ???
I made a small program to test everything and even that doesn’t cut right …
I can’t for the life of me find anything in Fusion that makes it do this, and it has only just started after the new update…

Guess I shall keep trying, and hoping I can find a solution.
Any ideas would be most appreciated…

I ran the program out of Fusion - 0.2mm Offset all round.

I ran the program out of Easle - 0.2mm Offset all round.

I think this would indicate that it’s not a Fusion 360 setting. Have you checked your GRBL configuration ($ values) to ensure your steps/mm are accurate. Belts can stretch.
Can you share the gcode? Along with measurements of your bit.

Sure can …
And yeah I tested all the belts and step measurements, and they are all ok. (within .01mm)
And Checked all of the $$ settings, they seem ok from what I had written down when things were working well…
The tool size is 3.175mm or 1/8th …

Because of run out in the router itself or with the collet, often times the actual cut width is wider than the measured bit diameter. Use a caliper to measure the width of a single pass cut and adjust your tool diameter to match that actual measured cut width.

Gcode looks spot on for a 40mm outer cut with a 3.175mm end mill.
I’d echo @JeremyHanks recommendation for accurately and precisely measuring the actual width of a slot in the same material you’re using for the project.

You might also measure the amount of backlash present in your system.

Ok Guys, how does one measure backlash ???
And what would happen if I changed the $100, and $101 values to cater for the constant offset, would that work ???
I must admit, it is getting better for some reason, but I think it is just because I am measuring different items each time, so in reality it probably isn’t changing. hahaha
I do wish I could figure it out though.
I have reinstalled Fusion and its the most upto date version, I have reinstalled the Universal G-Code Sender, I reinstalled the GBRL on the Arduino … Is there something else I am missing ???

Ok Guys, how does one measure backlash ???

This video show the principle:

Backlash is the amount of motion that the steppers provide but isnt transferred due to slop/friction etc.
This happen when the axis change direction and all systems have some backlash.

Changing the GRBL step/mm will counter this but scaling inaccuracy will increase so its not a viable option.
With lack of compensation tools you cheat either on actual design or fine tune your bit diameter to take up the difference.

Just throwing this out there,
Belts getting tired/stretching
And how much time is on the bit you are using? Have you tried a fresh one?

Just going through some old invoices to see when I did change them last.
The machine doesn’t get used everyday, and it isn’t in direct sunlight or anything like that, but if its over a year, I shall get some ordered and set them up and try again …
Thanks for the idea … Muchly appreciated.