Hi all. I know there’s a fantastic way of controlling my DeWalt spindle using the IoT ready to go plug, but that is no longer available on Amazon. It’s been out of stock for a while and even the company who makes it doesn’t know when they’re going to be available again.

So, I’m attempting to build my own. I’m a former electrician, so I’m pretty familiar with wiring & whatnot, but for the life of me I have no idea how this works with what I have.

I bought this relay from Amazon 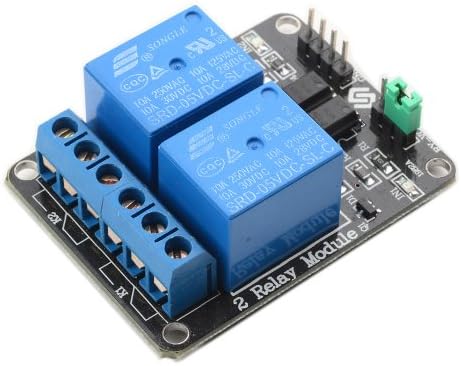 I have already wired up a socket so that I can just plug it into the wall, & when the relay is turned on it’ll provide power to the DeWalt. My problem is I do not know where to get 5VDC off the gShield to power the thing.

The pins on the relay are simple. The red is 5VDC, Black ground, and the 2 green are for relays 1 & 2 (although I just need 1 right now) which signal the relay when there is 0VDC on them. I’m 83.22% sure the signal pins are these on the gShield 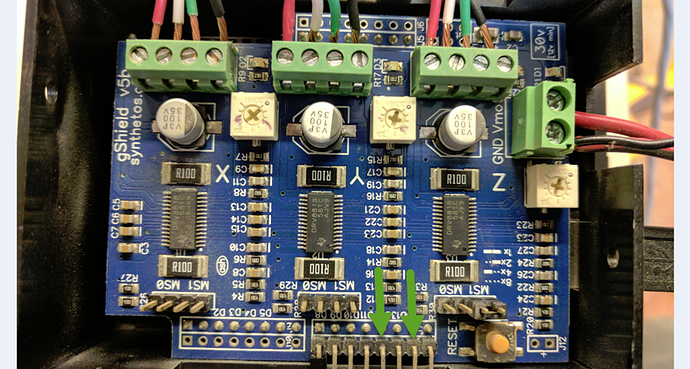 Where can I, on my gShield board, get a constant 5VDC? I know the 2nd & 3rd pins on that pin set carry 5VDC, but I don’t know why so I don’t know if they shut off or do other things when the system is running.

Any help is greatly appreciated.

The green arrows in the gShield photo point to logic pins. You don’t want to pull power from them.

There is a +5 volt power pin on the Arduino on the other side of the board. It would be next to one of the motor terminal sets.

Two issues with this relay. First is the load capacity. The DeWalt pulls 7 amps running and more during in rush. I wouldn’t want to run those relays that hard.

Grbl is capable of doing that, but it is a compile time option.

You can see the grbl connections in the thread below.

Welp… anyone need a cheap relay?

It can handle 10 amps at 120 VAC. It’s the 10 amps that bothers me. You can run it with 7 amps. My concern is that the in-rush currents are likely to exceed 10 amps for a short period of time and that will shorten the useful life of the relay.

I would agree in a commercial setting, but in a hobby setting he will be fine,
Plus he has a second relay to use, if the first one fails! Just Kidding. But seriously…
I mention this because without looking a data sheets, MTBF (mean time between failures), etc… A statement about a in-rush currents, and “short periods” of time are very SUBJECTIVE.
Additionally, the Dewalt 611 specifically has a soft start feature. So if someone has measured the in-rush current and can prove that it is even significant it would be great for the forum to see that.

IMHO @RobbAllen the module you bought will work fine.

Now to just figure out how to grab the 5VDC I need and how to reverse the positive v/ negative logic.

Granted, I tried sending M03 S1000 and M05 through Universal gCode sender and none of the pins really changed anything. I’ll have to dig harder in the details of the board. 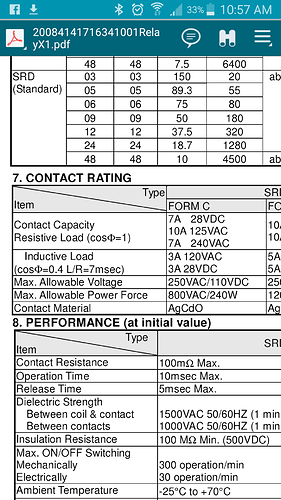 This part will probably take the longest unfortunately!
Recompiling is a pain. A hardware solution is ok, assuming you are good with transistors.

Honestly, a newer logic level HIGH relay board might be your easiest solution, but as far as current is concerned, 10 A is still okay.

As pointed out, inductive and resistive loads are tricky electrical topics (Power Factor stuff).
Again, I don’t think any one has measured the Power Factor for the DW611, but I doubt it is anywhere close to by 0.4 (my subjective opinion).

I used to be fantastic with electronics, but that was back in the 90’s when I was an aviation electrician in the Marines working on Cobras & Hornets.

Sadly, my only soldering iron died and I’m solderingironless as of now

I really wish I could just order the IOT device & be done with it, alas it’s still not in stock.

I’ll give it a shot, load wise, nonetheless. Worst case, I release the magic smoke that runs the circuit and I’m out the $6 I would be if I didn’t do anything.

Good attitude!
Don’t be afraid to try something!