As i can get my hands on as much drag chain as i want for nothing, i added a Kabelschlepp Drag chain on to the Z axis. I Could move the fixed point down the 80/20 and reduce the number of links, however at the moment i’m not sure the path the router power cable will take to enter the X axis chain so i’ve left it long for now. 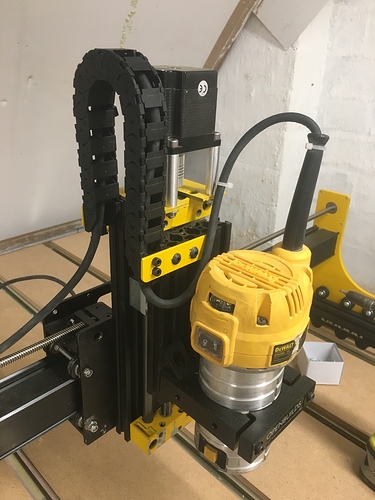 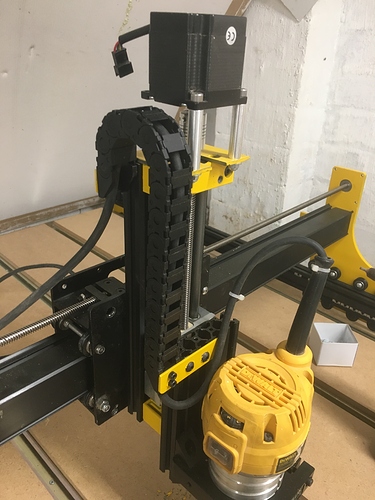 I’m not sure i’m happy with the Igus linear slide as i seem to be getting play at the router. I thing this is due to the distance the router is mount from the carriage. I’m going to play about with this and see what the impact is but i might need to change it. Seems silly to have done all this work and still have chatter at the router bit. Might look at the CNCnewbie kit, does it come in Yellow?

Since you are using extruded alu for the Z-mount plate, how about filling the inside with “Epoxy Granite”? This will achieve two things:
1 - Heavier plate, vibration behaviour will move up in frequency (away from low, “chatter” oscillation)
2 - Stiffer assembly as the extruded walls are not allowed to move /flex relative to eachother.

I have on my non-Cxarve preformed a similar mod (directed towards my X-axis, gantry) using sand and epoxy and really liked the outcome.

Also, a second higher support for the Dewalt could help solidify the components.

Just food for though!

I had a look at the Z axis and i can see the movement between the linear rail and the bearings which run on it. so its to much play in the bearing rather than any movement in the aluminium 80/20. A second router mount is something i might look in to but i think i first need to solve the play in the bearing. I’m worried that adding more mass would make the issue worse at the moment.

With the CNC4Newbies is the 6" travel enough? I know from measuring that i have just over 4" of clearance under the X carriage. So i’m guessing ti will be.

4” of clearance allows for that material but the Z axis needs to go even higher for the spindle clearance so you need like 1.5x to 2X in Z travel to accomplish that, at least in my opinion.

O, i’m not sure. The Y axis rails are at the standard height but there is a lift on the X axis over standard. I have a 1/2" base board and then a 3/4" waste board on top of that. This leaves me aprox 4" under the bottom of the X carriage to the top of the waste board.

What should it be?

I don’t remember offf the top of my head. I’m to heavily modded.
@SeanNaylor What measurement do you get?

With the larger travel people may want to utilize the space and implement longer reach bits which means better to get some extra travel if it won’t cost too much more. Better to have and not need than to need and not have. Hence the reason I bought my CNC

Well my CNCNewbies Z axis is on order. Hope it lives up to they hype.

I’m on to working on the cable chains and wiring now but on Friday i’ll go and get the wood i need to rebuild the enclosure as i need to make it wider and deeper now to take account of the new stepper motor positions.

I’ll be glad when there’s power on the machine and i can drive it around in easel. It takes an AGE! to move it by hand. I don’t want to just push on the X axis and turning the motor couplings by hand is slow going.

Well honestly it can be moved by pushing if your alignment is perfect and your strong enough.

Quick question. People using a relay to switch the router on and off, do you use a fan on the relay to keep it cool or just a heat sink?

I don’t even have a heatsink. No heat rise at all.

People using a relay to switch the router on and off, do you use a fan on the relay to keep it cool or just a heat sink?

Why would you need to keep it cool? A relay is basically just a switch.

Depending on the current flowing through the relay/switch and its rating, it may get hot.

Current through the coil correct. I’ve seen some become slightly warm, but not hot (unless it was improperly used).

“Heating” is a relative term Bob. But the contacts should be rated to meet or exceed the amount of current flowing through the wire.

Try pulling 20 amps through a 10 amp rated relay and see how quick it heats up.

Misusing any electronics tends to heat things up

I’ve got a heat sink to go under the relay, on the grounds that a carve can take hours for some projects i don’t want to have any issues.

The project has been ground to a halt by a person driving there car in to the front of my house… this was unexpected to say the least. Spent most of Monday on the phone to insurance companies trying to get them to come out and have a look at the damage so we can get the hole in the wall at least covered up. In the end the response was " we can’t get anyone until Thursday"

So I did it myself.

I hope to get back on to the build some time this week.

Well it’s slow going at the moment. I’m waiting for the CNCnewbies Z axis to arrive before doing any calibration work. I wired it all up to the X controller last night and got the machine moving around. The steps per MM are WAY WAY WAY out at the moment which is to be expected. I want to get the new Z axis on before doing the set up, checking for square etc but it is nice to see the machine driving around under its own power.

I’ve been doing “other” woodwork while waiting. Following the addition of a car to one of our rooms 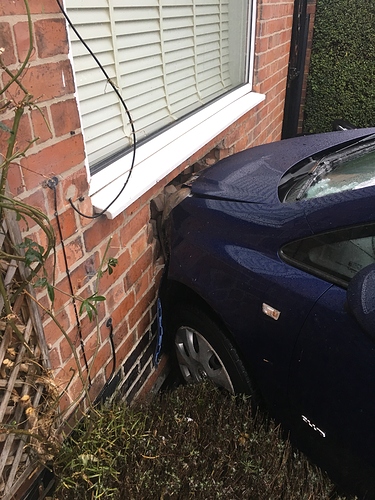 I’ve had to do some boarding up 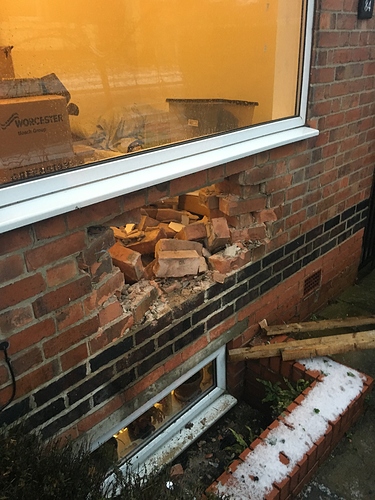 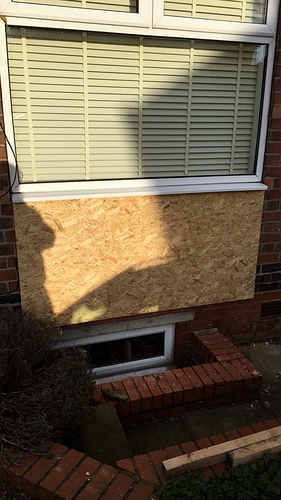 Still waiting on the insurance company to get there act together and send a contractor to come out and fix it.

LOL, actually… that is the upstairs of my house, Its the little bedroom which will become my office. We live on a hill and the house is set in to the hill side. So the front door is on street level with all the bedrooms but the living room, kitchen, dinning room etc is down stairs. From the street the house looks like its just 1 floor but from the back it much large.

When i called the insurance company and told them a car came through a bedroom wall it took them by surprise.