Cooling for both sides of the gShield. I had to raise the headers to make room. 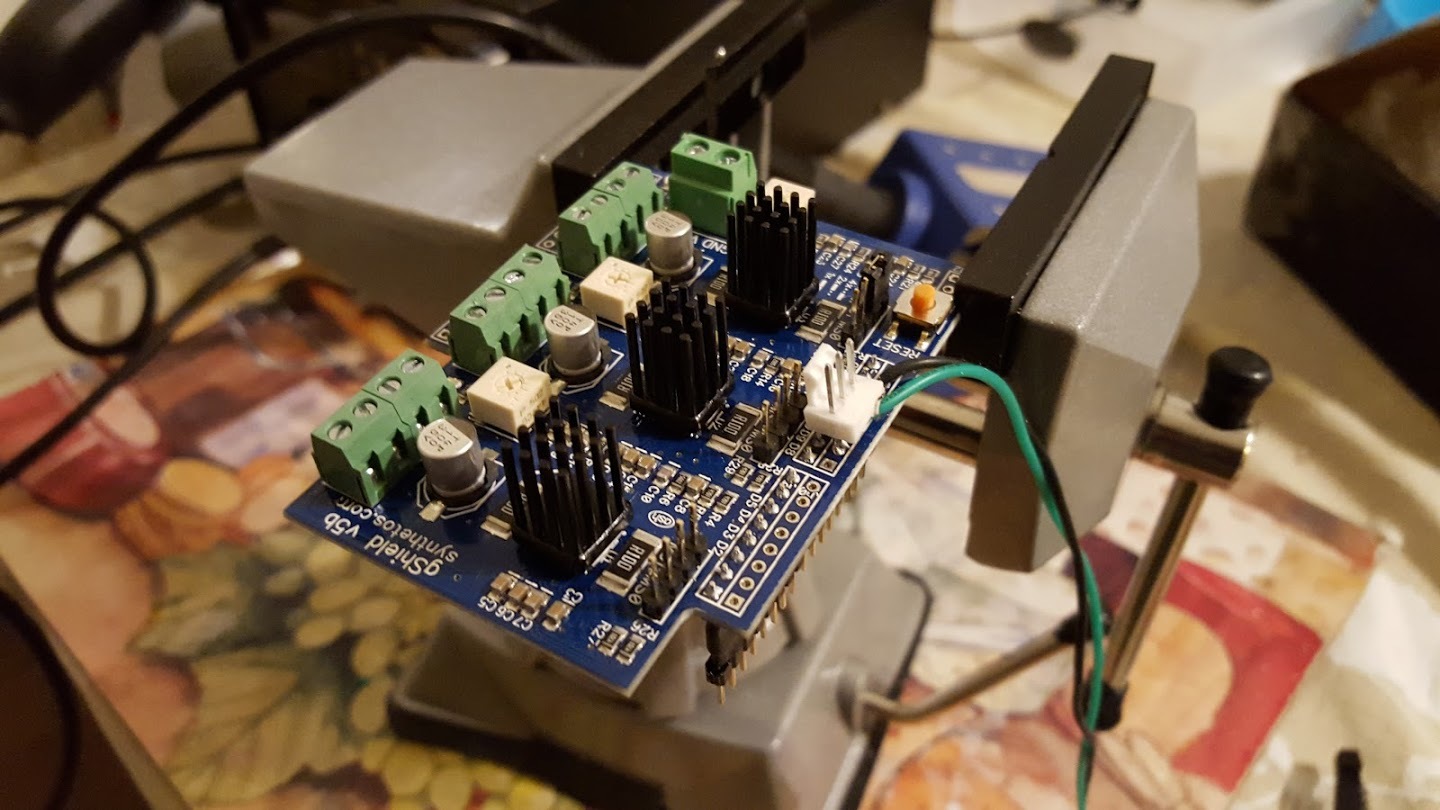 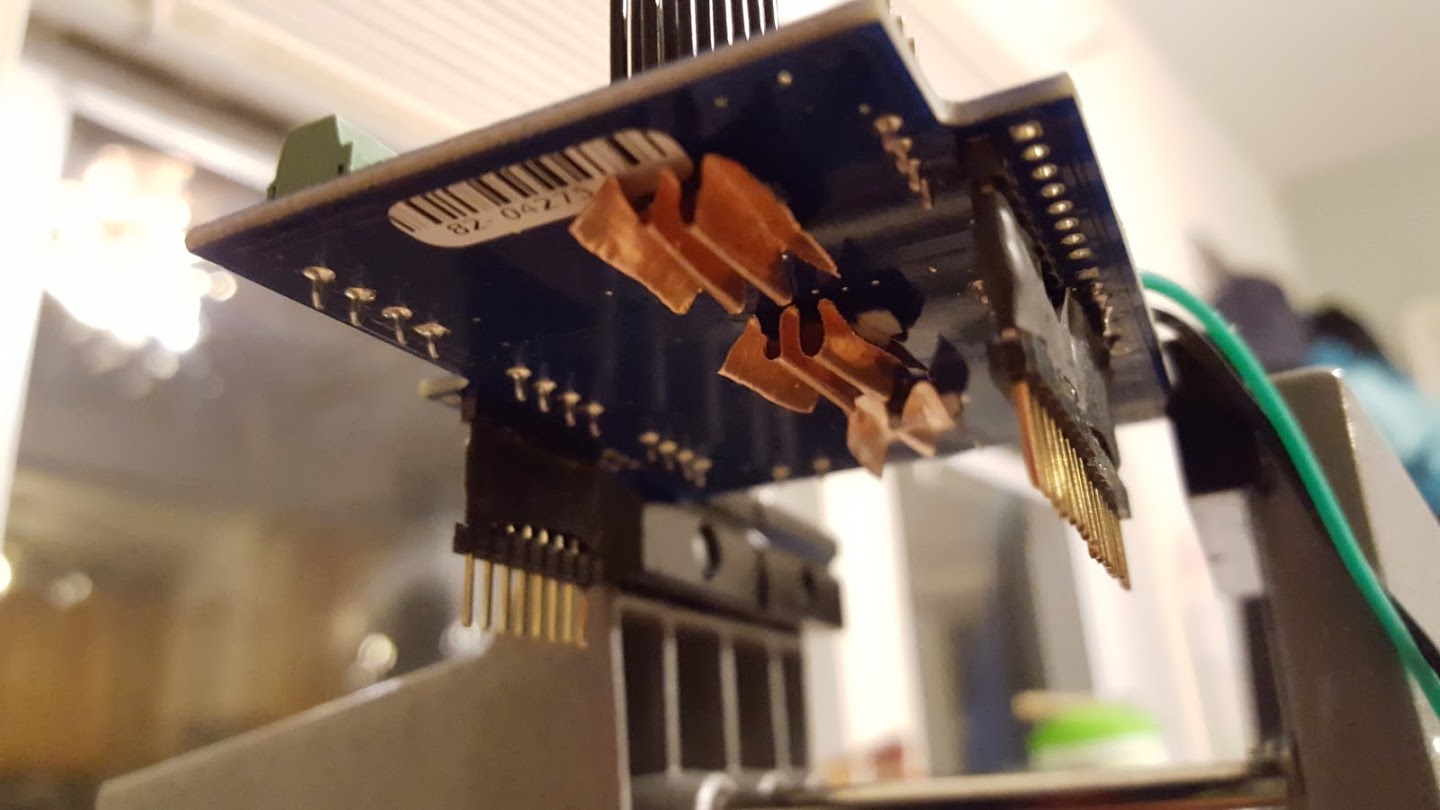 well that’s pretty cool… After burning out 2 Pololu DRV8825’s yesterday, in just simple “testing,” I determined heat was my enemy and an going with an active fan cooling system…

I never thought about insulating the bottom from the Arduino!

According to a friend of mine who has used these drivers for 3d printers, the chip is actually set up to dump more heat to the bottom.

FYI the Pololu boards are actually supposed to have the headers soldered toward the components (grab the black foot off the last two pins so it does not interfere with the trim pot). After adjusting the current control trim pot using the vref (very important step), mount it upside down with a heat sink. Also ensure that you follow the minimal wiring diagram with capacitors etc.

mmm… could be part of my problem… I’m willing to take advice on these:

I have 5 more coming ($20 inc. freight) - which is one of the reasons I chose to go this route rather than the gShield; I knew I was gonna have electronics problems and wanted as many “interchaingable parts” as possible.

As far as the headers on the Pololu’s are concerned, this is exactly what I have: 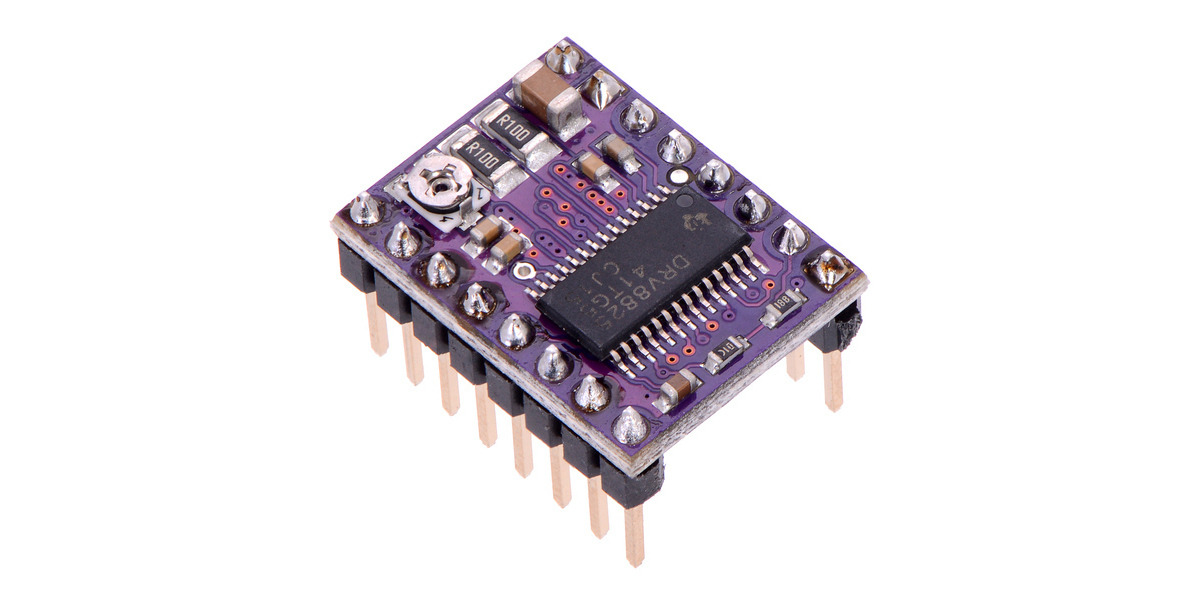 They are attached to this board (It came already assembled):

This is a quick guide to help with assembling the Arduino CNC Shield V3.XX. We also have a discussion forum for this board :  Contents: Assembly Steps First Run Jumper Settings. 4th Axis Configurat…

I’ll take any setup advice you can give… they worked pretty good with some steppers I hacked to create a machine similar to the X-Carve, just so I could learn basic “motor control.”

The board on the right (from Pololu’s site) is what my short experience with this product has told me to do. If you look at the board thermal specs you will notice the trademarked PowerPad to the bottom of the chip has a very low thermal resistance allowing it to either be effectively heat sinked or cook your board good (bad). The resistance to the top of the ic package is 15.9, to pcb is 5.6, and to PowerPad is 1.4. That means that more heat can go to the board than the top of the ic package unless you dump it out of the PowerPad - https://www.pololu.com/file/download/drv8825.pdf?file_id=0J590 page 5 and http://www.ti.com/lit/an/slma002g/slma002g.pdf 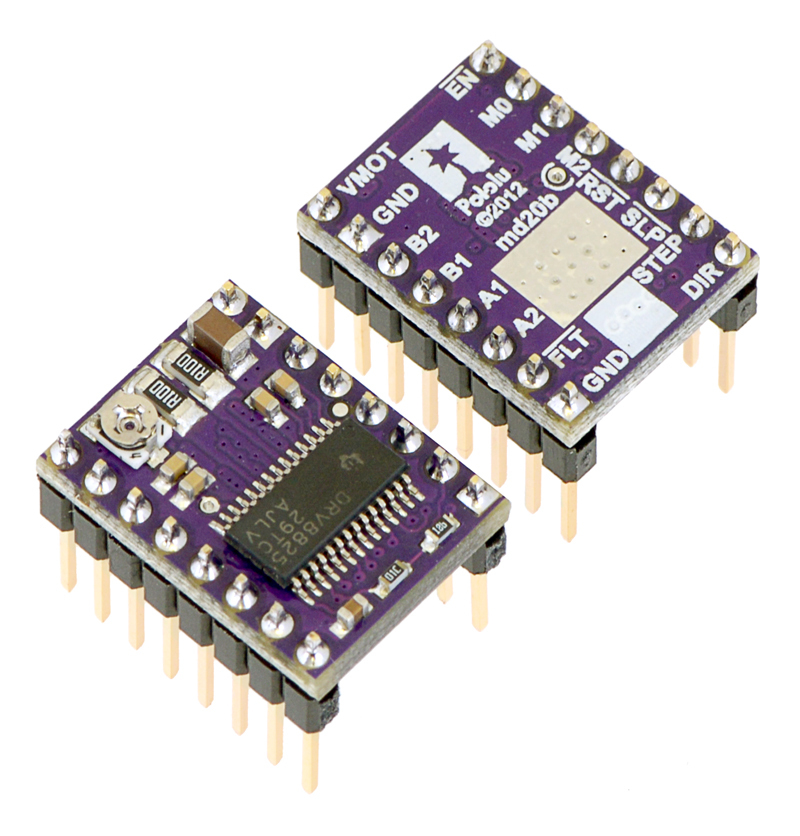 Just curious. How did you burn out the 8825s? The chip has over-current and over-temperature protection built in.

Larry, I’m really not sure if I “burned” them, but they dang sure burned ME when I touched them!! So, I figured I probably overheated them - they did not smoke, spark or burn, so I have no concrete evidence.

The odds are that I killed them by taking them out and putting them back in while the power was on - OH YES, I knew better, but accidentally left the power on once, BUT I was having problems before I ever removed them from the Protoneer board - that is why I took them out, to switch them to see if it was a bad chip or something else. Since only 3 of the 4 failed (and all were removed and replaced under the same conditions) I’m hoping it’s an overheating problem that was causing them to “cut-out” in the first place…

Aron,
Mine are definitely the one on the left/bottom… TBH, they should have NO problem running the Stock NEMA 23’s I got from Inventables…

I worked on a project once that had a floppy driver chip that ran with a case temperature of 125 degrees C. Totally within spec. Sure didn’t want to touch that chip.

As far as the headers on the Pololu’s are concerned, this is exactly what I have:
https://www.pololu.com/product/29823

The NEMA 23 that Inventables sells will take up to 2.8 amps per phase, so you really can’t drive these motors to full torque with the Pololu driver.

I’m not so good at any of this, but I’m also not afraid to ask questions and have experts give me advice! based on that, Pololu seems to offer nothing nothing that will meet my needs for this project; the wife is not going to like that news.

but the DRV8818 doesn’t get there either… it’s slightly better, but still doesn’t allow for maximum capacity of the motors.

I was really trying to avoid a setup with 3 of these:
https://www.circuitspecialists.com/cw230.html?otaid=gpl

I’m gonna keep the pololu setup as I’m pretty sure I should rarely max-out the current of the Pololu DRV8825. While not being an electrical engineer, I know that with induction motors, they only draw as many amps as are needed to move the load - the same seems logical with stepper motors. Since the X-carve comes standard with a motor with 1/2 the rating, I should really only “need” that amount of wattage to run. Correct?

No, it’s not that simple. I have to do some work this morning, but later this afternoon I’ll give you the information you need to understand the issues.

The gShield stepper motor driver chips limit the current to the stepper motor windings. If they didn’t the motors would burn up as the X-carve uses a 24 volt power supply to run a 2.3 volt motor.

So the stepper motor driver chip turns the voltage on and off to get a nominal current that the motor can handle without damage.

You can tell the driver chip what current limit to use by setting the Vref voltage on the chip.

You don’t have to use the maximum current that the motor can handle unless you need the maximum rated torque from the motor.

You can select less performance by setting a lower current limit. If at that lower performance level the motor is able to do the job then you get some advantage by using less current. One of the advantages is less heat and longer motor life.

Unlike other types of motors (unless disabled) the stepper motor will draw the same current even when it is not turning.

So, you are saying the Pololu drivers should work with the proper Vref settings - maybe not as well as the gShield, but it should be able to do the job?

The gShield that I received from Inventables was set for a current limit of 0.9 amps. Many people that bought an X-carve had to adjust their current limit up to avoid skipped steps. I haven’t done any testing to see what the lowest current is that will operate the X-carve reliably. So, if you can get the Pololu driver to work at 1.5 amps and keep it cool you might be ok. Maybe even lower currents would work.

Also notice the warning that Pololu gives for this product:

Warning: This carrier board uses low-ESR ceramic capacitors, which makes it susceptible to destructive LC voltage spikes, especially when using power leads longer than a few inches. Under the right conditions, these spikes can exceed the 45 V maximum voltage rating for the DRV8825 and permanently damage the board, even when the motor supply voltage is as low as 12 V. One way to protect the driver from such spikes is to put a large (at least 47 µF) electrolytic capacitor across motor power (VMOT) and ground somewhere close to the board.