For the first time I just tried doing a small, detailed carve with a 0.02 engraving bit using some of the 1/8" thick blue PVC that I bought from Inventables. My X-carve is a fully-upgraded X-carve using the X-controller and the Dewalt 611. I used Easel’s recommended settings for Expanded PVC with the Dewalt 611 set at its lowest speed and was disappointed to see that what I ended up with was a somewhat melted mess that ruined the detail.

Could someone please tell me what settings I should be using for PVC so that all the “ejecta” from the carve doesn’t melt into the detail on my carve?

Yes. it was a bit I bought from Inventables. Can you elaborate please?

I posted right before you added the bit details. What feeds and speeds was easel recommending for pvc with an engraving bit?

Seems way to slow to me. For engraving acrylic a depth per pass of 0.01 and speeds of 70 to 90 ipm are common. I would treat PVC similar. Try increasing your feedrate and lowering your doc. Maybe start around 60 ipm or so. The chips are making it back into the cut path at the lower feedrate and melting back to the material.

I get that Phil. But how does it apply to a TAPERED engraving bit on PVC? As I was watching the carve I could see that it was cutting the design properly just as it had previously cut the design properly on medium oak with pretty much the same settings but with a higher feed rate.

The reason I was trying to cut this design on PVC was because it is very small (< 1 inch diameter ) with fine detail and cutting it on wood it comes out a little rough looking. I need the final cut to be really smooth so I thought PVC might give me that.

Are those settings what you would use if you wanted to cut your initials (written in long-hand script, converted to an .svg image, and imported to Easel)?

What I’m trying to create is a stamper for use in stamping my initials into my clay/ceramic creations. And it needs to be small (less than 1" diameter) as I previously mentioned).

And it needs to be smooth so that the detail of the letters is clear. Wood seems to splinter too much to keep it smooth.

But what about PVC?

Cool I now have some great info on the bits to use for the stuff I bought.
Now to figure out how to get it flat again. Strangely it bowed on me.

But what’s going to prevent the melting? Seems like your higher feed rate (than what I used) would only generate more heat.

I’ll give that a try and report back.

Try some Corian or Candlestone.

Ok. Tried Phil’s settings with a 20 degree engraving bit, 70 ipm feed, and 0.02 depth cut per pass. The result was better than before but still not smooth. Tried 90 ipm feed and the result deteriorated again.

My sense at the moment is that there is just a mismatch between the type of bit I’m using and the material.

I’m also thinking that I might get a smoother surface if I could adjust the stepover. But I don’t know how to do that in Easel.

@JohnChamplain: I’m not familiar with Corian or Candlestone. Could you elaborate upon why you think these would be better materials to use?

They are acrylic and engrave with very fine detail, and do not melt when engraving. Many use them for Lithophane engraving.

Their primary use is for kitchen countertops. 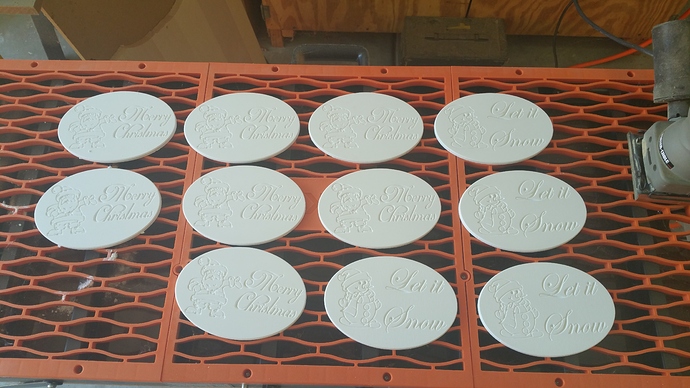