There is only one thing that I truly have to know, How to do a cove cut, slot cut. I want to make cuts that are basically a half cylinder. 1.3’ in depth and width but rounded and straight down on both ends.

The project is for a poker table I want to build and the slots are for poker chips. I have seen it done in one of the ads, where the guy made the stool/stand with the curved leg that he put into a cove cut. Even showed the cove cut being performed, just can not figure it out. Possibly a 3rd party program? Any suggestions on 3rd party programs or how to program the cove cut will be greatly appreciated!

The easiest way is to use a router and stop blocks. In easel you will need to use a cove bit and create a pocket the size that you need. Test cut into a scrap wood first to get everything just right.

You can do this with VCarve, there are a few ways to do it, probably the easiest would be a molding toolpath. You could also use Fusion 360 but the learning curve is steeper.

A cove cut is a rounded bottom groove that runs a certain length. You can buy core box or round nose router bit and create a straight tool path for however length you want it. 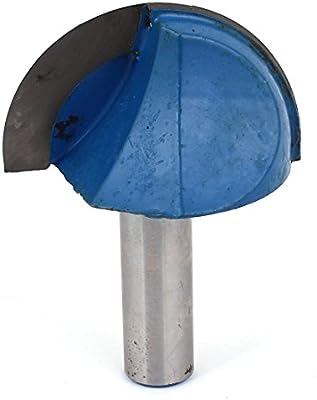 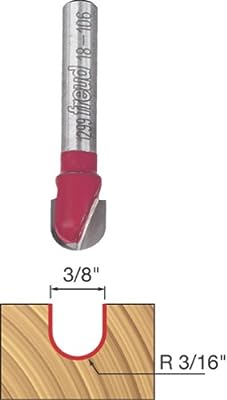 You could also make a drawing in a 3D program. Many people use fusion 360, I use Rhino. To do this you would draw your half cylinder horizontally, create the gcode in a Cam program, and run the gcode on your x carve, This might be necessary for a cove that is larger than whatever bit your router can accommodate.

So for instance, If I have a .5" diameter cove router bit , I can use it in a cnc router to make a cove that is say 1.30" wide and .65" deep. The machine would take multiple overlapping passes to create that size cove. Usually you would do roughing passes and a finish pass. The smoother you want the end result ( less sanding), the more time it will take to rout the step over passes. This would be for a horizontal groove.

Sometimes it’s easier to just use a hand router and a template with a pattern routing bit.

This bit in a template with the 1.3" diameter hole drilled out would make that size hole.