Brian,
I’m sure you can get 8020 with the correct slot spacing, but I haven’t identified how to bolt 2 faces together along their length and tighten joint tightly.

Angus,
A ball point pen may be a good option. Of course, by the time I realized the sharpie was going to wear, I was a long way into having it done. Afterwards I though of milling grooves with my 22 degree V bit, and perhaps hilighting them with a dark stain, but just decided to leave it alone until time to replace it and then try something else. Hopefully somebody else will learn from my efforts and come up with a perfect solution by then!

I milled in a thin X0 and Y0 line with a V-bit, worked great!

As far as bolting two rails together, you’d have to drill holes in one rail and use the slot nuts. I’d think a bolt and nut every 8-12 inches would give enough support. I’m thinking if you used a 20x80 extrusion you might be able to mount the support rail to the maker slide so the support rail sits higher than the slide. This would have the benefit of shielding the slide from dust and chips. It looks like there’d be enough clearance.

What I’m really interested in when I get to expanding the xcarve beyond 1m x 1m is changing from the belts to bicycle chain and cutting replacement plates for mounting the gantry so I can mount it higher to increase z-axis.

changing from the belts to bicycle chain

If you want to get away from belts take a look at a rack and pinon setup. Belts are used as a cheaper alternative to this kind of setup.

This looks awesome! Looks like I’m going ot have to build another CNC! Have my X-carve up and running pumping out jobs and CNC parts while I build the next ultimate X-carve, that would be great!

Kind of like the phase babies having babies when your kids start having kids. CNC’s making CNC’s!!

What would be the advantages of doing this compared to a full Acme rod driven system?

ACME rods, as they get long start to “whip” and cause inaccuracies as it moves the device. Therefore Rack and Pinion can accurately control much longer systems for the same size drive system.
Conversely, ACME systems allow the motor to stay fixed in one place for the axis so wire flexing and routing issues may be easier.

I’m sure an exception can be found, but I’ve not seen a high accuracy system driven by chains. Rather I see chain drive used in very high load/low accuracy requirement situations.

I made my own wasteboard out of 18mm MDF i got it cut at the store at 1000mm x 1000mm.
i learned when putting it on the machine that it would not fit it was to tight and the lower weels on the rails hit the ends. So i routed out the left and right ends to allow the rollers to have room to move but still left about half of the board there for support and i don’t have a table saw to cut it accurately so yeah. then i sanded the 4 corners where it goes by the end supports to give me enough clearance. i drew a 10cm x 10cm grid on the board with perm marker. i have yet to put threaded inserts in but im not sure i will. i have done a few projects with double sided tape and a few by using the clamp set and a wood screw thru the hole and just screwed into the wasteboard. I the used 4 of the M5’s to attach it to the machine and counter sunk 3 wood screws and fastened the board to my work bench.

I used the plans from this site. I cut the board to length with a circular saw, using a clamped straight board to give me a straight cut. Then bought a $3.99 ruler from Harbor Freight (http://www.harborfreight.com/48-in-aluminum-ruler-69365.html) which has mm one side. I marked off all the intersecting points with a pencil and drilled them out. I purchased the inventable threaded inserts and used my drill to drive them. Whole project took about 1.5 hours. Cost about $60 for the 4’x8’ 3/4" MDF and threaded inserts. It was about $260 with shipping for me to order the pre-made one. 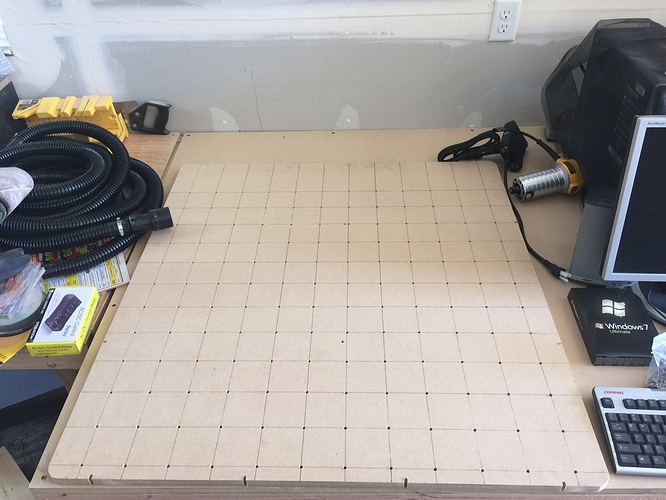 HERE is the drawing for the 1000mm wasteboard (found on Inventables store page for their wasteboard).

Anyone have an updated (working) link?

Hi found this link on the support page.
Wasteboard

Followed it and downloaded the PDF as I am going to need it soon. 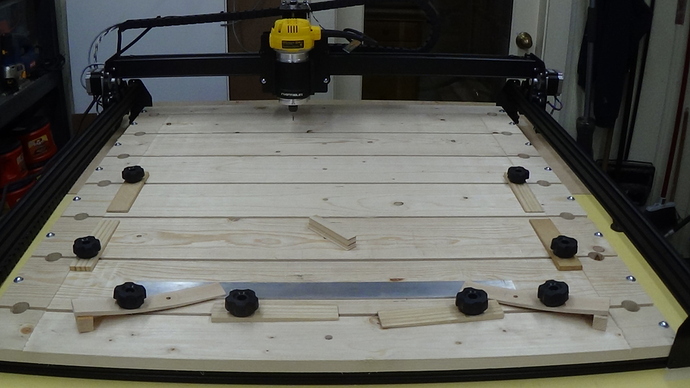 After cutting each 1x6" board to length, I believe I ran it through my table saw ripping off 1/4" or so from the width just to ensure that all of the boards were dimensioned identical. I just happened to cut a 1x4" board for both the front and back boards but this should not be necessary to do. You should be able to use only 1x6" boards with the one in the back specially ripped to width (or possibly just left out altogether).

The clamps seen in the photo are made from door shims with the plastic knobs and 1/4" plate-head bolts both acquired from the specialty hardware bins at Lowes.

As you can see, a hole is drilled at each end of a slot to allow for clamps to be slid into place on either side of the work piece.

An advantage of having a segmented wasteboard is that if one or two of the board segments become worn or damaged, you can easily replace them without having to replace the rest of them.

In this particular photo, I was setting up a temporary bump stop. I later made a permanent one from a carpenter’s square.

It also makes me realize that the X-Carve can be used as a wood planer :grin

The only down side to using 1x6 board is that is is harder than MDF, and so it will dull your bits faster.

Speaking of planing, rather than producing g-code to plane the wasteboard segments and risk making a huge mistake (at a time when I had no experience using the X-Carve), I planed them manually. That is, I used a 3/4" router bit and moved it by jogging it back and forth using Chilipeppr. I just set the jog distance to a small value like 1/10th of an inch and planed away (by pressing the arrow keys). Now, I’d probably just do it in “full auto” mode and I’d start by removing the front segment in order to set the cutter depth. Did I mention that a segment can easily be removed by loosening three screws?

Does this board give you more room to cut?

No, dont think so.

That’s exactly what I’m going to be using. Should work very well with the tape/super glue trick

(just wish they sold it in black). Have you used a dial indicator on it to see how flat it is?

Did you ever implement your plan to cut thicker materials? I was thinking the same thing - I need to cut 3.5" stock and was thinking of building a waste board with a cut out for the thicker material and putting the xcarve on a platform with the bottom of the stock resting on the table.

Actually, to my experience, MDF is more abrasive. And dulls
your blades quicker than real wood.