I make led display signs from silhouette shapes. I’ve always cut them on my scroll saw until my XCarve gift from my sweetie…still awaiting the controller though.

Here’s a shape I’m prepping and I’ve specified the material thickness at .25 and the cut depth at .25. My question is that the simulated area on the right doesn’t appear to show the depth through the material. Will it still cut it out all the way? 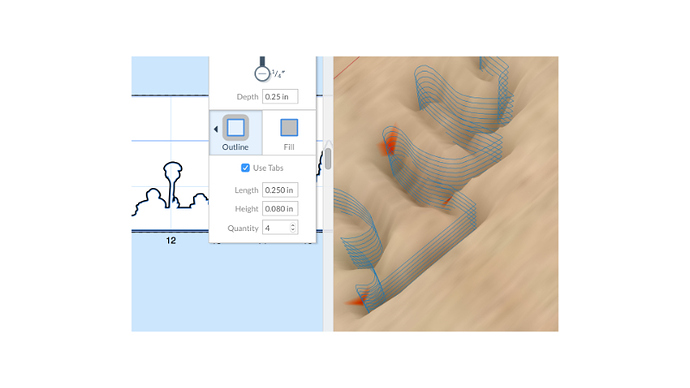 The 3D preview isn’t the most accurate. You can turn the material off and just very the tool paths, that should give you a more accurate idea of how it will cut.

Regardless of theoretical settings, there are a couple of issues at stake here. First, if your waste board/acrylic isn’t PERFECTLY flat to the machine, then using the same depth of cut as material thickness could cause your part to stay attached annoyingly, even between the tabs. You might want to experiment with making the depth a thousandth or three deeper than the supposed material thickness (which it rarely is the same as the nominal thickness).

@MidnightMaker has a good point, I always measure may material before I put it on (at least I try to). I’ll then add about .2mm to the material thickness.

You have to adjust the material thickness in Easel, you’re basically tricking Easel into think your material is thicker then is it so it will cut deeper.

I get it. How about this for an enhancement request? The little changeable vertical slider has a box that shows the “Depth” and it also allows you to manually edit that depth value. How about allowing it to be larger than the material thickness, but change the color, highlight the box and the entire slider in RED to show that you will be carving deeper than your material? You could even open a box similar to other edits to alert the user of this.

It would be a nice feature to allow complete cutouts like this, without having to resort to ‘trickery’ to get what you really want.