Has anyone had success cutting brass? I’ve got specific brass cutting bits from ToolsToday, I’ve followed their instructions for recommended RPM and IPM and I’m still breaking bits. I’m now $200 in the whole on broken bits and still can’t deliver on this project. I’m cutting with a 0.06"Ø bit at a 0.01" doc, 18,000RPM & 54IPM. This is getting really frustrating and it shouldn’t be this much trouble.

Have you done feed and speed testing? I do a version of the testing procedure at Precise Bits, http://www.precisebits.com/tutorials/calibrating_feeds_n_speeds.htm. I’ll typically start about 20% lower than my calculations tell me to start, and work my way up in smaller increments than they suggest.

I’ve noticed that I generally have to go shallow and fast with flat-end mills, while I can go deep and slow with ball-end mills. The bits you’re using may require you to go slower and/or shallower, but only feed/speed testing will help you get the numbers that you need for your specific machine.

I got my recommendations of feeds and speeds directly from ToolsToday. They said RPM X # of flutes X chip load would = IPM. They recommended 18,000 RPM for those bits. When I calculated it all, the IPM came out to 54IPM. If I cut any slower or higher RPM I get melting material on the bit and then it stops cutting and starts flexing. I probably could try a shallower doc, but seeing how the brass reacts at slower speed, I wouldn’t want to go much slower. Maybe down to 30ipm. It’s a 3 flute ZrN coated carbide endmill.

I’ll take a look at the feeds and speeds recommendations on PreciseBits, but I got my specs from the manufacturer.

You can’t use the endmill manufacturer’s statement for a heavy duty, industrial machine as more than an initial guide for a hobby-oriented machine.

A further consideration is which alloy of brass it is — 360 machines, so well it’s the reference standard, while 260 is hardened and work-hardens when cutting and is quite difficult.

I concur with DavidSohlstrom here, your current settings are way too aggressive for a machine as flexible as the X-Carve. I’d suspect you’re seeing less melting and more galling, as far as material sticking to your bit goes… what are you using as coolant / cutting fluid?

Thanks Dan, I’ve been looking over the parameters that PreciseBits suggests and it’s definitely a lot more conservative than what was initially recommended to me. I didn’t start using a coolant until I noticed that there was material sticking to the bit. I was just using WD40 since it’s what I had available.

I generally regard GWizard as pretty much the gold standard on that kind of data, I use it myself for every job. Also, if you glance over at the Shapoko wiki, that data seem to jive fairly well with the GWizard results.

I’d personally be working it dry as much as possible, if you get your feeds and speeds just right, I’d bet that you can be rid of that sticking mess without needing to resort to the mess. An air blast, if you can, is rather handy for keeping the cutter clear and cool without the mess.

So according to PrecisionBits I wasn’t too far off on my depth of cut. They recommend based on the math a 0.012" DOC which is pretty much what I was doing, but their math also suggests a cutting speed of 11IPM vs the 54IPM ToolsToday suggested. Thanks all for the help and suggestions. ToolsToday is sending me some replacement bits, so hopefully this will all make a big difference in my cuts.

Have you got any photos of your failed cuts. 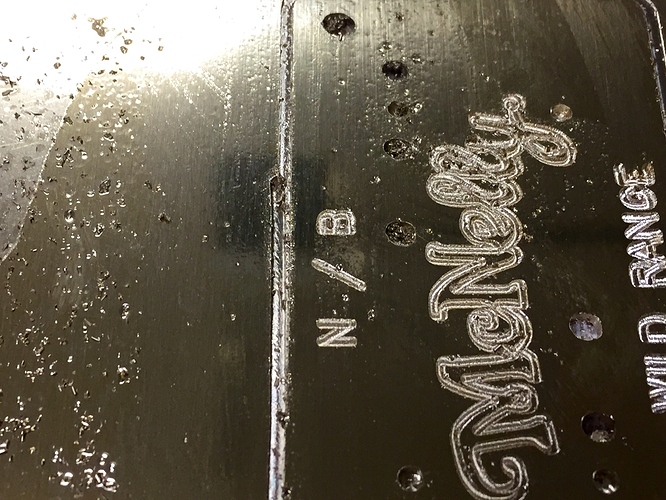 That looks like bit deflection to me, i would try shallower passes.

Although I’m cutting/engraving copper sheet now I’ve not got to the point of consistent success with brass. I just don’t think the machine is stiff enough.

But very shallow depth of cuts and lowering the feed rate will get you closer. Like copper you want to avoid heating the material too much as it’ll just harden it.

You might also consider annealing the brass first. Works in some coppers so might in brass as well.

Thanks for the tips. Do you think there would be any advantage or disadvantage to using a spiral-o-flute bit on brass? I know they work really well on aluminum.