loaded up a piece of 1/8" acrylic material, drew a box in Easel and set the depth of cut to .062" ran the part, checked cut depth with digital calipers the cut depth comes out to .037" is there anyway to get this a little closer?
thanks

If the X and Y axis both cut Ok and the issue is only relating to the Z axis, I suspect there’s a issue with the settings you’ve used in telling it what machine you’re using.

I understand there are two different configurations the X-Carve uses for the Z Axis, one is the Acme threaded leadscrew and one is the standard leadscrew. If these are different pitch threads, the difference could explain your fault.

Is there a setting in Easel where you can tell it what type of leadscrew you’re using?
David.

You can set those values by going through the setup process again:

The only option i see for that is to choose between acme and regular threaded rod, i have and have selected an acme rod

This time you’re not zeroing your Z axis as showing on the picture. You can put piece of thin paper between bit and surface you want to cut. Bring Step Interval number very low, then hold down shift key click down arrow key one at a time until bit touches to paper. If still need more you can cheat touching paper a little harder next time. 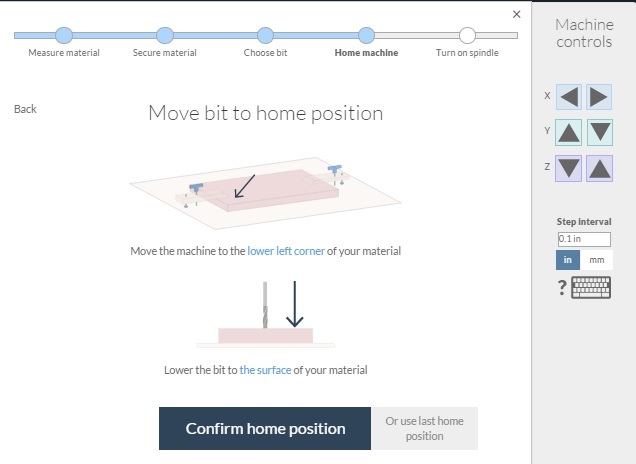 ok i was just using a reciept, would thicker paper help? and i was taking it down to where it tore the paper when removing it

I use part of a standard piece of office paper. I jiggle the paper slightly as I’m moving the bit down (in .1mm increments), and as soon as the paper stops moving, I move the bit back up one step, remove the paper, then move it down two steps, (since most office paper is close to .1mm in thickness), and set that as my zero.