I’m thinking about building some (essentially) boxes. Non-square edges, odd shapes, but all flat panels. I’d like to use the X-carve to cut not only the outlines of the panels, but also to miter the edges - has anybody done this? I know that it’d take me out of the realm of Easel, but what would be the best tool? I’ll design in Sketchup, so I’ll know the dimensions of each panel and the miter angle for each. I was going to just cut the panels with vertical edges and then set up the table saw to do the miters, but that’s a lot of work. Can I just cut the panels the way that I want them from the start?

Well, sort of - he’s using the 90-degree bit to get 45-degree miters. I need to make miters with arbitrary angles, so I’m not going to have a bit for every angle.

Ha! I like this video. I think I’m gonna make some boxes. Great for giving gift cards etc.

That’s not really an optimal solution. Looking to get all of the cutting done at once - panel shapes and bevels. If I’m going to do that, I could just use a panel-cutting jig on the table saw, but both of those ideas are a factor of 4 more man-hours than letting the CNC do it.

a V-bit of a given angle can create edges of that angle or edges of arbitrary angles between that angle and flat.

Imagine that you were walking along a flat field and came to a sudden slope with a 45 degree grade. Looking left and right you see that this slope continues as far as you can see. You want to continue in the direction you were going, but a 45 degree grade is just too steep to comfortably climb. One option would be to turn slightly right or left and take the slope at an angle. By not going straight up the slope, the angle at which you are climbing is reduced. Once at the top, you can resume the direction you were heading. This is much the same way the mule trails in the the Grand Canyon work. They gently descend into the canyon while largely following along the steep canyon walls.

So where does this bring us? Software such as Vectric is smart enough to work out the paths. As long as you have a bit that is at or sharper than the angle you want to produce you should be fine. This system will break down a bit on inside corners, but other than that it should work.

For $700, it had better be able to calculate projections

I’m assuming that something like Fusion 360 can do it too, since it could carve arbitrary gradients, right?

BTW: good analogies for that concept.

I’m assuming that something like Fusion 360 can do it too, since it could carve arbitrary gradients, right? 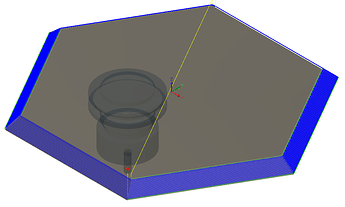 That’s it exactly! Is that fully made in Fusion 360? … exporting Gcode from there, sending with UGS or Easel or the like?

Just made it to reply to your question. Yes, all Fusion 360. I’m not sure how I’d actually decide to set up a toolpath, but you’d have lots of options.
Can I ask what the end goal is?

I’m building wooden structures for climbing (‘volumes’). They’re regular or irregular 3d shapes (one side empty, where it attaches to the wall). Can be done on the table saw, but there’s a lot of tool setup change, several sleds, etc. I know that I could design the shape easily in Sketchup and measure lengths and angles - if I can just get that into a toolpath, I could cut whole panels at once, and just need to do assembly!

Yeah, for a shape like that, define it in a 3D modeling program and cut with a ball-nosed endmill.