Cutting plywood with a downcut bit

I just tried out my new downcut bit on some plywood and WOW! 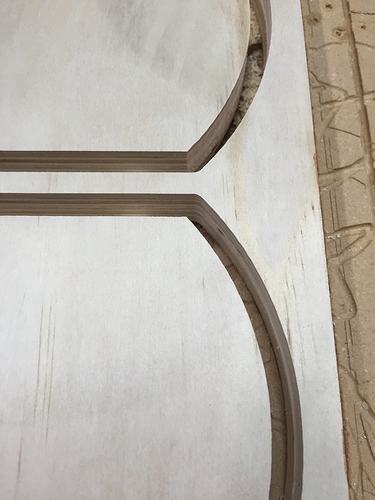 I am very impressed with how clean this cut. As soon as I figure out how to design any layout some joinery I think I am going to be making lots of boxes and such

2 Likes
What speed and plunge depth for MDF
Just some of my projects/prototypes
Production upgrades for 3/4 plywood monograms
Rusty March 25, 2016, 8:29pm #2

Looks great! 4000mm/min holy JESUS! That’s fast! Did you blink and the cut was done?

I also just tried a downcut bit for the first time on plywood. I was impressed with how much cleaner the cut was than the upcut I was using. My speeds and depths were no where near what you are running though. I guess I’ll have to try that on my next project.

Really interesting about the feed speed. Looks like a great cut. Were you getting nice chips or sawdust still? Is your machine a 500mm or a 1000mm xcarve? Have you done anything to it to reduce chatter? I’ve often wondered if I take cuts too slow, based on the fact that I get dust and not chips.

I use these bits at a smaller diameter for a lot smaller parts. The WOW hit me when this air intake reinforcement “ring” came from the machine. 1.5mm bit, 18x40mm inlet with an edge of only 1.8mm wide. 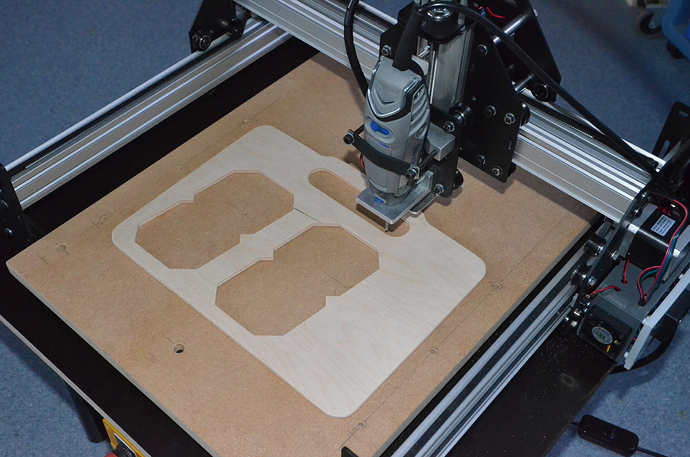 wow these cuts looks so sharp. Which is he brand of that bit? Why did you use 18000 rpm instead of max? to avoid burns?

I wasn’t paying attention but I believe it was more dust than chips. A thicker, “fluffy” dust

I used GWizard to calculate my feed and speed. Theoretically it should be optimized for the bit.
The lower RPM is to keep the calculated feed rate to a more manageable level.
GWizard wants max RPM, but if I do so it gives me feed rates so high the machine has issues.

I did another batch of plywood,
Here are how the chips are coming out:

Thanks for the update. That’s impressive that you’re getting good sized chips. It makes me think you’re on the right track with your feed rates.

@AaronMatthews Alright, today I decided I’d try out your feed rates with my 1/8" downcut bit, Dewalt DWP611 set to about 21K RPM, on my 500mm machine into some nice birch plywood. I took the slot cutting and the pocketing at 3mm depth per pass at a cutting speed of 4000mm/m. I’ve gotta say that the results are impressive. The only chatter I got was when the machine re-encountered the work after lifting away for a moment. Otherwise the cuts were as clean and precise as when I run the machine at 1/4 that rate. It’s definitely faster than I would have otherwise pushed the machine but I might start running it at this speed a lot more often after seeing how well it worked.

Edit: As I’m thinking about this a bit more, what does the gshield and ugcs default to for a max speed? I’m wondering if I’m actually hitting 4000mm/m, or if my machine might be holding it back…

The default max for the XC in the G Shield Settings is X and Y axis 8000mm/min and Z axis 500mm/min.