Any ideas why this happened? Making four leaf clover coasters, this is the 3rd time running the same project with no changes, all started fine the bit made 4-5 laps around the clover shape then cut into the middle to soon on one of the leafs, then cut right on track again for 3/4 of a lap around cut into the middle again in a new spot and then back on track. Mad and the Project was SOL I killed the power (BTW having the same problem reported in a other post that the pause and stop buttons on the top right of Easel are missing)

I checked out the X-Carve and can’t find anything loose, jammed, etc, and if something was why would it go back on track?

If details or photo are need I can reply with them.

Either your gcode has some weird commands in it or you’re losing steps somewhere. If your machine is accurately returning to its path after its craziness, it sounds more like something awry in your code.

There are some very good code-cutters here, so if you post the file with a “please check”, someone may be able to check it for you.

Does the program you’re using have a tool path preview? That may identify some stray vectors it’s trying to follow.

@DavidWestley thanks for the reply. I wouldn’t think that the Code has a problem because like i said this project has run 3 times with out error. Adding a photo to hopefully show more.

In the last few hours i found two things, 1. the plug on the Arduino for the limit switches was unplugged not sure when this happened during the cutting or after. 2. My PC was being use for web surfing, music, youtube, etc, again don’t know if this load on the PC would be the problem 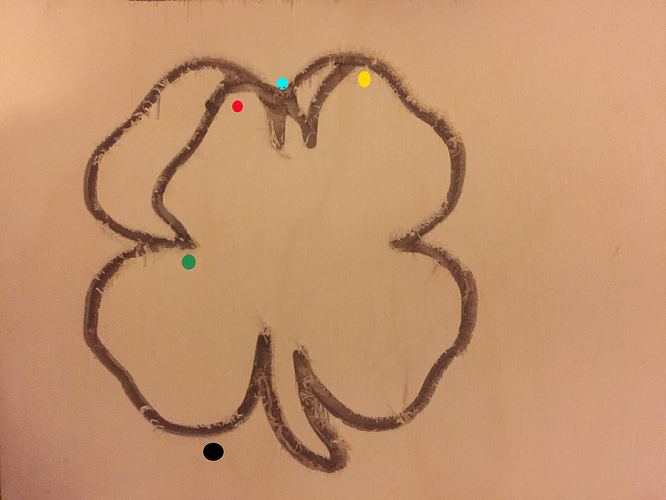 @PhilJohnson ALL settings are at the defaults, cut settings at the recommended. “new beta tool paths” is at defaults also because I don’t know where that setting is at. (haha)

@PhilJohnson
Stepper motor potentiometers Yes and I did use Robert’s video (was very helpful)
Belt tension yes, did by hand (don’t have a fish scale)
V wheels yes, did per Inventables calibrate instructions
Steps per mm no forgot, but this would only make the dimensions wrong not make it run off course, right?

Could you share a link to the Easel file or even a screenshot of the preview? Is the problem repeatable or consistent? As Phil mentioned, that it went back on course is very strange. Usually when the files go off course they stay off course.

Based on what I can tell, with GRBL, commands are “streamed” or sent one by one to the Arduino over serial. This means that PC performance could interrupt the stream of commands. I don’t know how GRBL would handle “invalid” commands. For instance, let’s say it gets a command at 45 ipm but it misses like 5 commands because the PC is bogged down and now it gets a x/y position that is not reachable given either the rate limits or the desired feed rate. It doesn’t loose steps but it just moves at a rate that it can to try to catch up to the commanded x/y position (which is still ever changing) and what you’re seeing is that it finally catches up. The coordinate system is still valid but it just takes that long to catch up. You could potentially pause Easel in this situation and the Xcarve may still move so it can catch up.

Again, not sure how GRBL handles those types situations but on mechanical positioning systems that I control at work, that’s the behavior they exhibit.

Personally, I’d recommend not doing any extensive tasking during cuts (one reason why I’m going with a dedicated code sender) to avoid this scenario. If you could add a way to load a program on the Arduino and then say “Go”, it’d eliminate this.

Well thanks to all for the help and troubleshooting!

Things have gone from Crazy to Insane! First the backstory, I got a SVG off the internet of the Clover, no changes just imported right into Easel, in Easel just changed the the size and copy, pasted and moved to do two at the same time on the wood. I ran the project 5 times, out come was 3 ran fine making 6 clovers, 2 times I stopped the project because of my error (set Z wrong, forgot to Home) On the 6th run the problem started, see photo/post above. Did all the checking/testing listed above couldn’t find a problem. Rebooted the PC and with only Easel open on the PC did run #7, made 1 lap around fine, then jumped a inch to the right, made a 2nd lap around and jumped a inch to the right again, then i hit the stop button in Easel (now working). Thinking that the design/Code was corrupted because of the hard power off(s) (because the bug that the pause and stop button was missing in Easel) or some unknown corruption I deleted the project and started over with a new project. Run #8, things looked great the bit made 15+ laps and was 70% done, then the insanity started, the bit path ran so crazy I couldn’t see or remember what it did. Hit stop in Easel, with the bit returning to home the bit broke.

Well thanks again for the help and reading.

To me, this looks like you might have a loose wire somewhere that’s causing intermittent power loss to one or more steppers.

Another possibility is low stepper motor current, but you say you’ve already performed the potentiometer calibration.

Well after letting it sit for a day, checking all the wires for damage or loose, making sure that the USB, Power cords, Stepper wires that none cross each other, Cleaning all over the X-carve, checking or tightening V-wheels, setscrews. etc running test runs with out a bit.

Again THANKS all for the help! it was now finished 4 projects with out any problems.