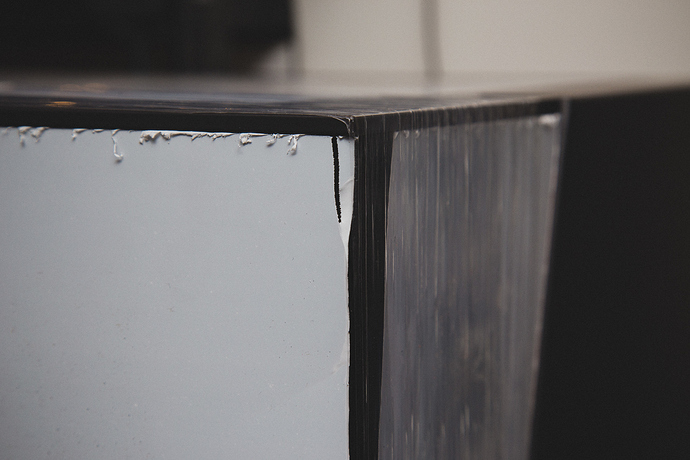 Another angle from the inside. 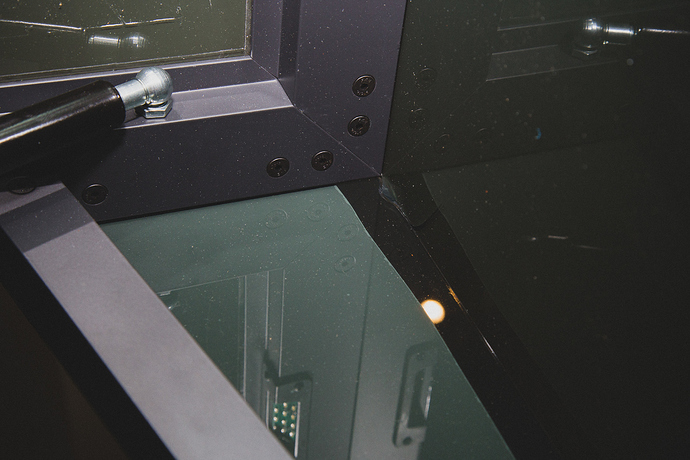 Peeled the protective plastic back to take a better look at the damage. 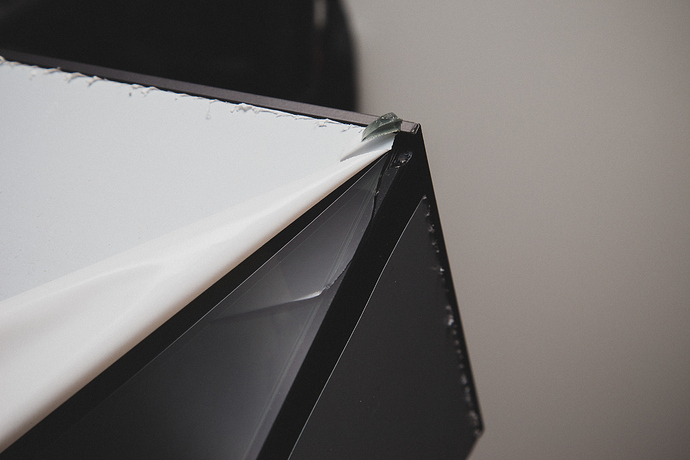 Right side seems off because the left side is flush but the right side panel has some play. 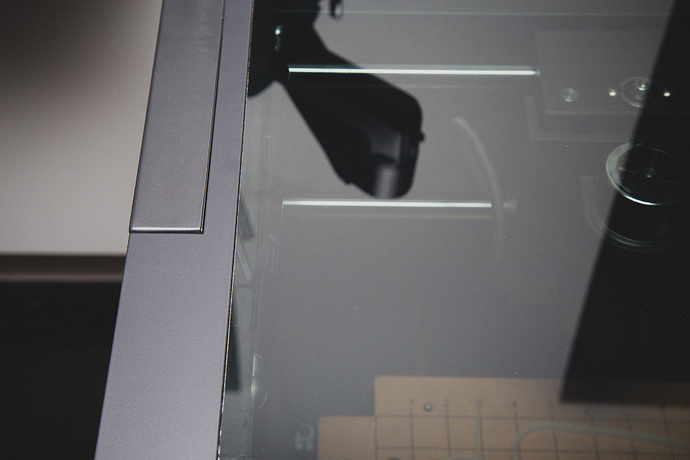 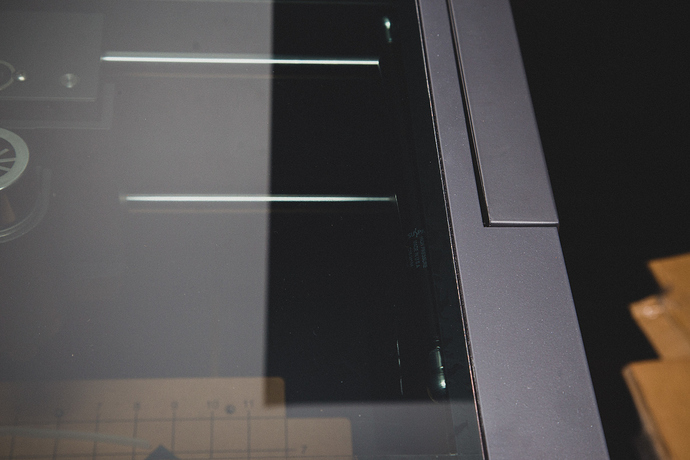 There are signs of impact on the right side. When the panel is opened up. You can see metal scratches being transferred from a stripped screw from the backside of the door panel. 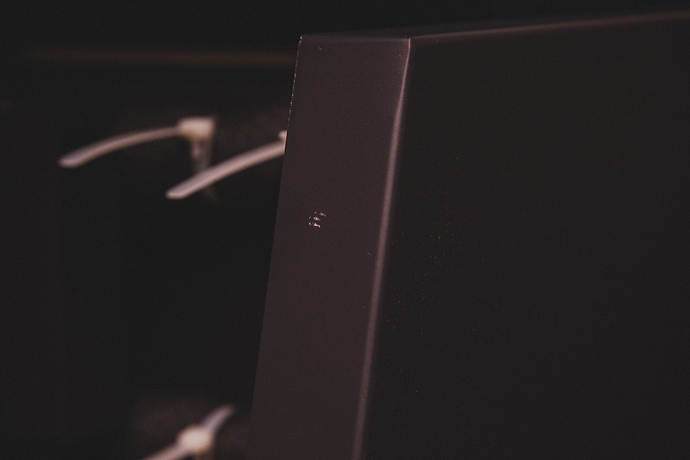 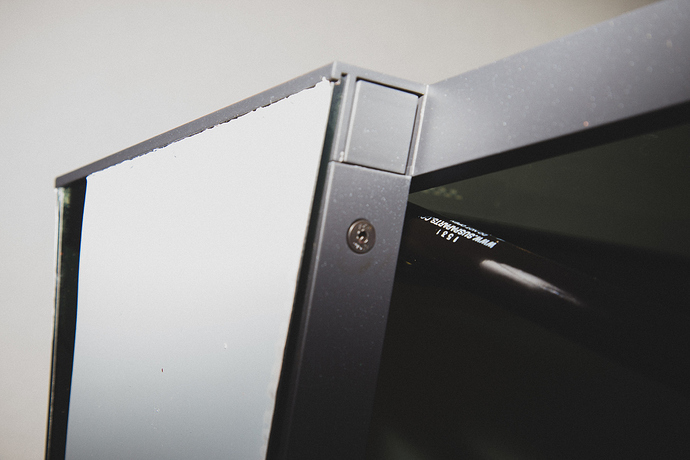 I just unboxed my Carvey on Saturday and I had cracked plexi on the front right side as well. All packing material looked to be in good condition. The outer shipping box was in nearly perfect condition so I think my damage happened before shipping… I am going to email them some pictures and see what they say.

Mine arrived with the same damage, they sent me a new plexi front. The machine seems to be damaged in other ways too, however they are working on it

Just an update. Inventables shipped out a new acrylic front and it arrived in perfect condition. 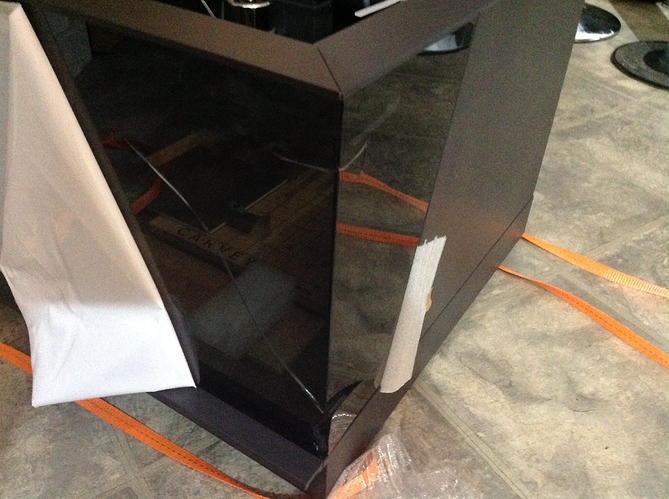 Just unboxed mine and found the same type of damage on the front right side. Sadness. 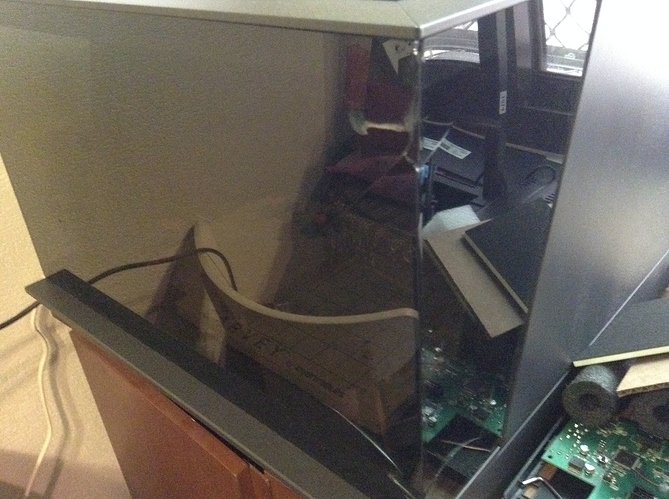 my Carvey has the same damage as well, that’s the package design problem & should be repair

my carvey had severe damage to the lid, it also looks like the box was dropped so I blame transit on this one. 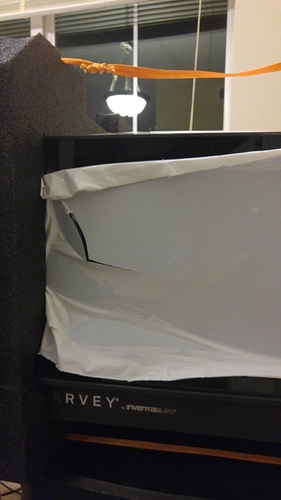 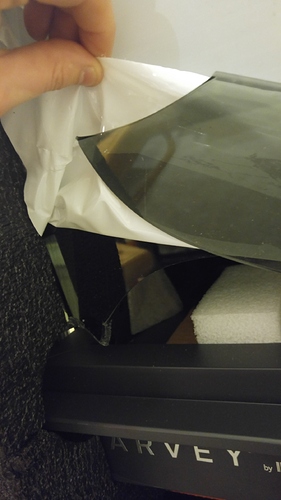 Seems like this is a issue with a lot of Carvey owners where the front right side glass is damaged in transit. After having ordered this well over 6 months to get a product damaged is really poor form. 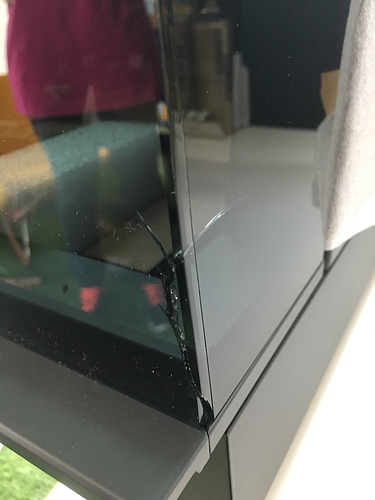 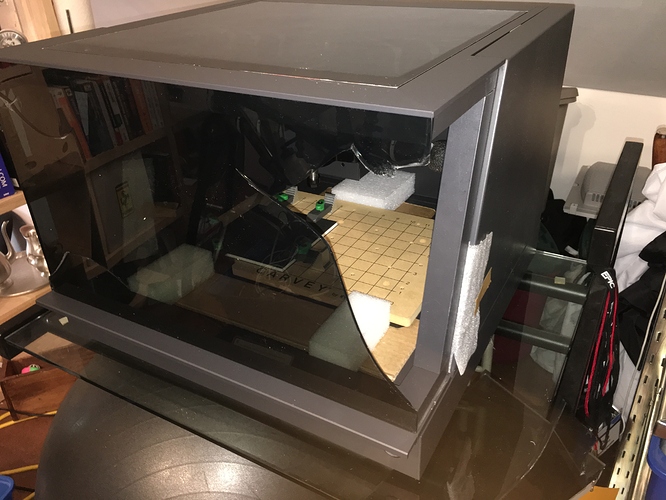 Mine got here with a chunk of acrylic completely disconnected from the machine. Just put in the ticket with the support team - in the mean time I duct taped it (red green would be proud) and moved on to testing it out - seems to work just fine. So, I assume the acrylic front will solve itself with the help of the support folks. Just glad to see it cutting just fine.

I just received my Carvey and found mine has similar damages on the front lid too. Very sad… 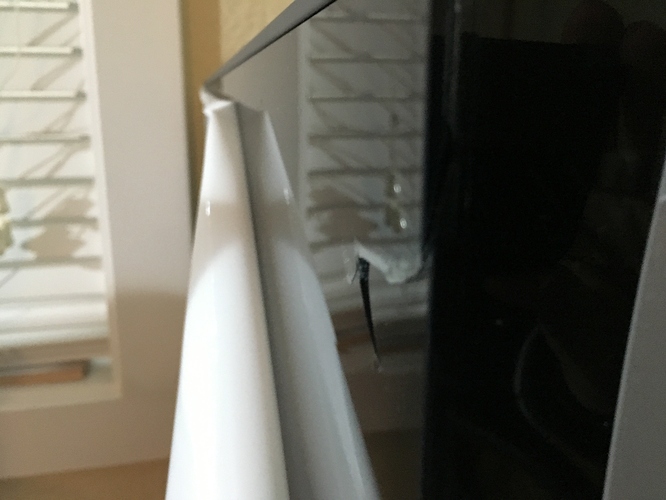 We have been in communication with UPS on all this damage. UPS has taken responsibility and is paying for the replacements and the replacement shipping costs. Before we shipped any units we went through the tough ISTA3a shipping test with UPS where they drop the box 18 times. It failed the first time, we adjusted the packing and it passed the second time. It’s not every unit but when there is abuse it’s bad. We had one customer witness the abuse and the UPS driver said “sorry”. The handlers don’t like the box because it is heavy. We added straps to the outside to make it easier for them to carry and pay the extra fee for heavy items that require a two person lift but they ignore their own rules and just charge the fee but don’t deliver the service. They aren’t even using the cart in the truck many times. We had a customer observe the driver “roll” it up to the door.

We are happy to fix, replace, or repair any unit that was damaged in transit.

Despite the fact that UPS admitted it is their fault for doing this to the boxes we are switching from acrylic to polycarbonate for the front window. We don’t want customers going through this hassle.

Add my Carvery to the list of others with “front right glass damage”. Mine arrived today with damage to the box and a cracked glass.

Hoping it can be replaced or fixed. I see that I wasn’t the only one. 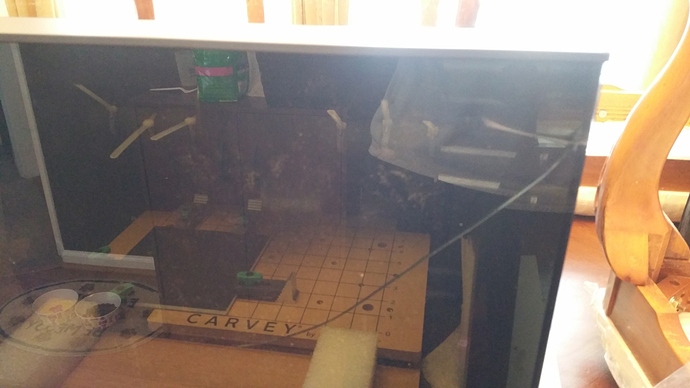 Another pic of my new Carvey. 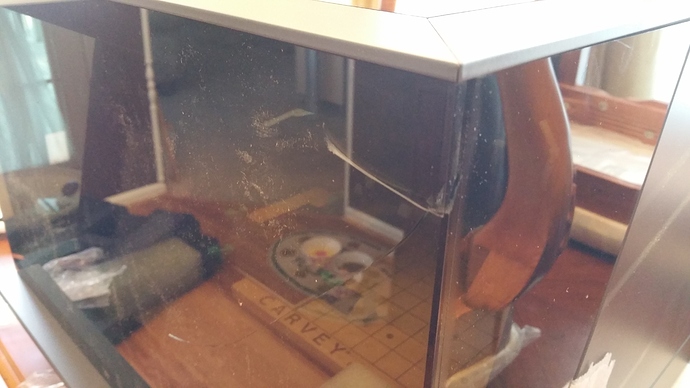 Update to my front panel. The customer support was super quick and I received my replacement part (front-panel) within two days. Replacing the front-panel was easier than it look. Just remove couple of screws out from front-frame to remove old panel.

We have officially moved from Acrylic front windows to Polycarbonate. To my surprise UPS has been reimbursing us for the damage.

We are hoping this solves the problem.

I had a similar issue. A few cracks on the right side. Here’s some pictures 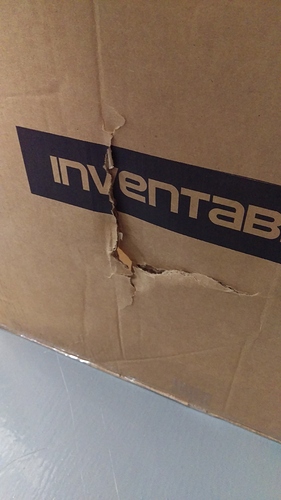 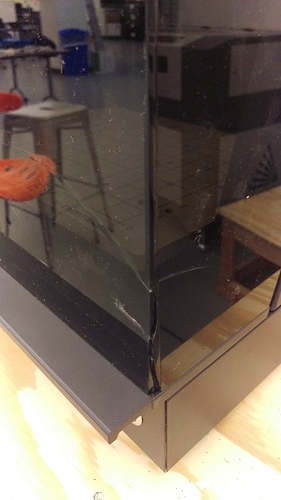 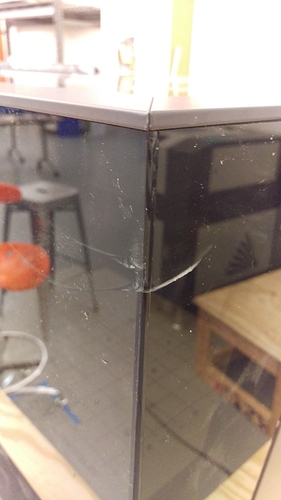 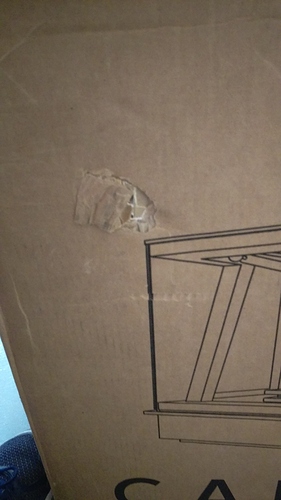 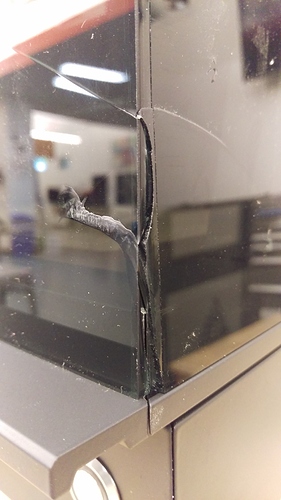 Customer service has been contacted, waiting on response.

Geez. I’m so sorry. That box looks like it was hit with a fork lift. A polycarbonate window will not withstand the impact of a fork lift driving into it.

The Customer Success team gets back into the office at 9am CST and will ship you a replacement.

That is completely unacceptable.