My colleague has a home brewery, and the family is from a small town outside Naples, hence the name of his brewery. I made a sign for him, in 1" Poplar. It sheared off on the “toe” of the boot where it joined the ball… 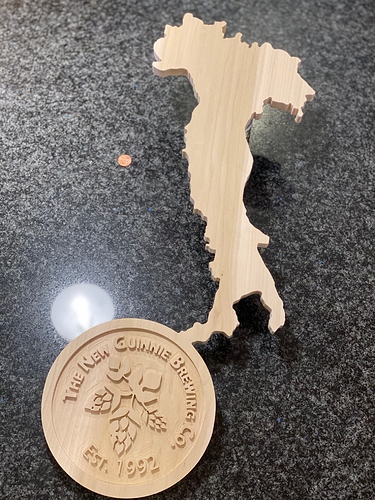 Sadly when it arrived (a few miles via USPS): 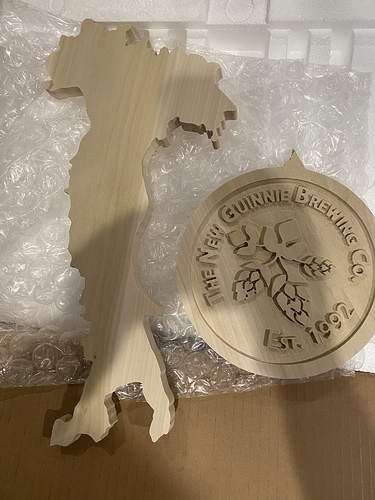 Originally I was just going to reinforce the “toe” but that was going to fail to sit flush on the wall with the horizontal keyhole. So I just did an entire back. Given how crappy that cheap plywood was I hit it with shellack prior to cutting so I got a less nasty edge. I think in the future if I do any signs with delicate features like this I might make the wood sandwich and then carve so I don’t have to do the matching like this.

another cool idea a friend had was to pocket out the back of the “toe” and pour epoxy in, but that sounded way more complicated than just plywood and glue, but good to keep in mind for the future…

You could have probably just used wood glue to repair the break, and it would have been fine.
Next time, when you have fine areas such as that, try to orient the grain so it goes across the area instead of through it. Wood is stronger WITH the grain, than across the grain.
Using a different species of wood such as a hardwood would also help with this issue.
There are many fine solutions to repairing a problem such as this. I’m glad to see you came up with one that was successful!

Yes, the challenge was I was worried about optimizing for the toe and having the sign snap. I realize stronger wood would be stronger, but poplar really does produce lovely signs. I did have some red oak I could have used.

Projects like that I like hard maple, like poplar both stain and carve very well. Oak is likely my least favorite wood although it is hard I absolutely hate the grain, I personally avoid it at all costs. I have done several with it I dig through the cut off pile at the lumber yard when I go and get free pieces I use for smalls and cutting boards.