Dents on round object and not straigt lines

I’m having some problems with my x-carve. As you can see on the pictures below, I was trying to cut out round objects for a box, but my x-carve doesn’t cleanly carve them out.
There are several small dents and one big one on the second piece. The first one came out cleaner, but still has some small dents and the lines aren’t straight, although they are supposed to.

I have the small x-carve with the Nema 23 steppers and the 300w quite spindle. I used 3mm 2 flute bit to cut the items and a engraving bit to carve the letters and the ornaments. The is wood I used is antique heart pine, sold by inventables and I used the settings found on this thread.

I checked the machine, but there are no loose wheels or belts. Anyone who might know whats causing this problems?

btw: I sanded the the first piece with very fine grain sandpaper, which is why it looks so clean. 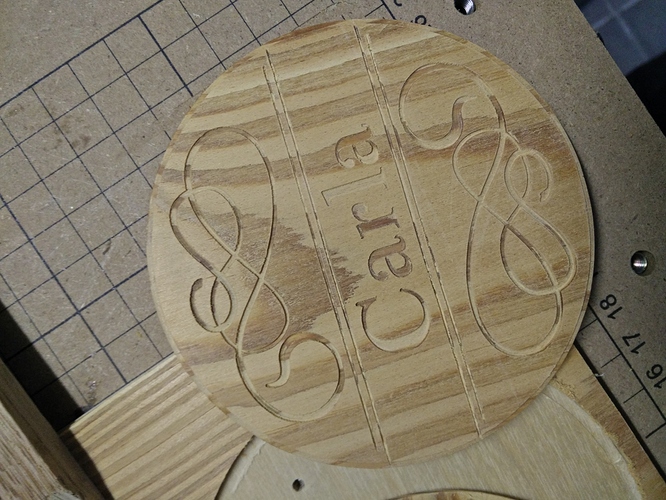 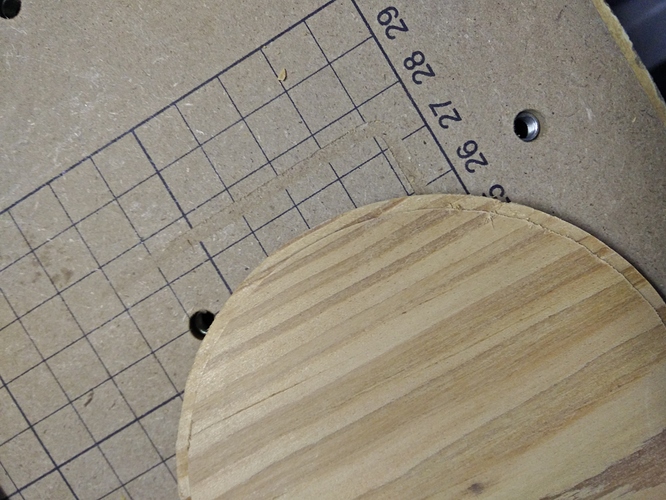 You may want to go over your V-Wheel and belt adjustments one more time. I know this machine gives Laser sharp edges when alignments are proper. Wheels must be very hard to turn with your finger, belts must be like guitar string. Be carefull for the belts aligned to center of the idle wheels, if they rub to edges, it breaks. Also make sure your pulley set screws are tight.

Hey Alan,
thx for your suggestions, but already checked all of those things. The wheels are barely moveable with the fingers and the belts are as tense a guiter string. I also checked the alignment of the belt on the wheels, they are all centered and the set screws on the pulley are all tight.
Tomorrow I’ll try to carve out the body of the box and post the results.

The dents are caused for 2 reasons. 1 you are cutting cross grain and 2 the dents happening where the wood is harder. As I’m sure you know when you see wood with light and dark grain that the dark grain is harder that the light colored grain.
You are traveling in a counter clock wise direction around the part so when the end mill encounters the harder grain deflection increases and you get a dent. If you were traveling the other direction you would see a bump at those points because the deflection would be away from your part not into the part.

Same issue with the straight lines in the middle of the part. you are again machining cross grain and every time the end mill reaches a area of harder grain it changes the deflection and so lines not straight.

I do not know what the tool stickout from your collet is but you want it as short as possible. This can reduce tool deflection and help your cuts.

David’s advise is the second possibility. And I trust anything he says. He has long time experience more than almost anyone in this forum.

Don’t worry, since I’m beginner, I trust everyone on this forum, more than I trust my self.

Today I tried to mill the body of my box, and I noticed the issues the David mentioned. On the darker parts of the wood the machine clearly had more effort to cut. Because of that I lowered my feed rate to half(150mm/m), but It didn’t work.
As you can see in the pictures below, the piece has two realy big dents on the opposite sites of the piece, which btw should be a ring and not a cylinder. But that was definitely my fault for making the tabs to small…

The piece of antique heart pine wood I used this time has height 3/4 inch and I used a 1/8 inch bit, with about a 0.8 cutting length.
Obviously the tool has to stick out pretty far in order to cut such thick wood, so what else could I do to prevent dents on my piece? 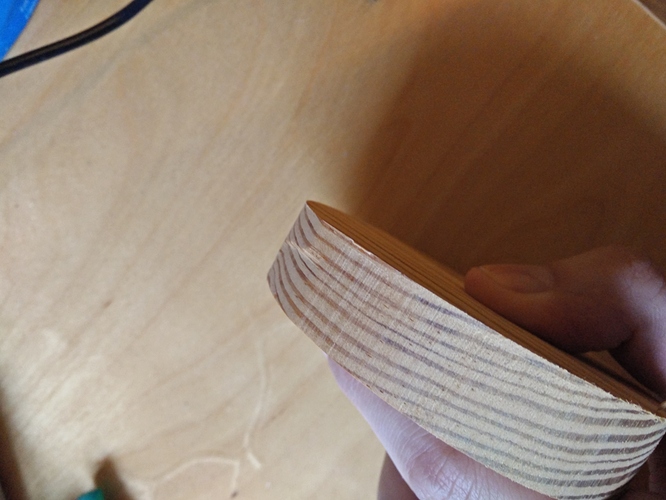 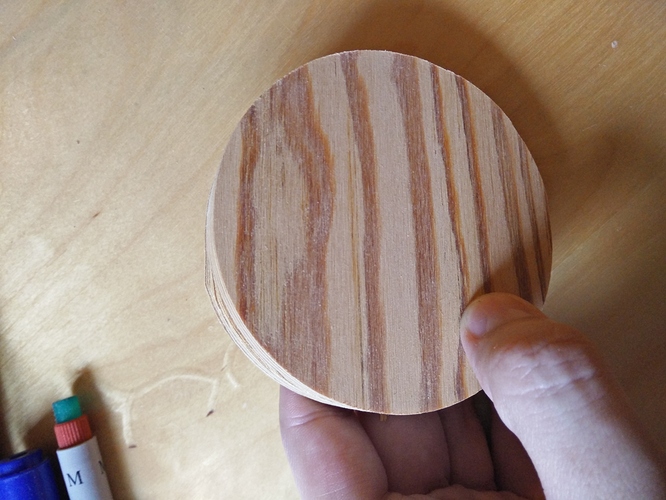 Interesting point is your bit returning back to normal circle after that bump. One problem I can think of, Z carriage wheels are might be loose, flexing your spindle to side when bit having difficulties cutting if bump is on left or right side. If that bump facing either front of the machine or back, I would say X rails are flexing. Just hold your Spindle and force it to flex with your hand to see if you have over allowable movement.

Its also weird, that only after front bump there is another dent, where the bit moved back. On the otherside there doesn’t seem to be a similar bump.
I checked all the wheels and belts before carving and I just check everything and all seem to be tense.
Interestingly I still can move the spindle with enough force, but the screws, which tighten the stock spindle holder are already tightend to the maximum.
There are two other things I noticed:

But I guess problems with the spindle or the GShield would cause different problems, right?

That’s normal. LEDs operating normal. I’m still wondering about flex. Did you check with hand like I asked.

ok almost thought so about the leds.

Yes the spindle flexes, but the carriage doesn’t as far as I can see. Like I mentioned above, the screws for the spindle clamp are tightend to a maximum.

Listen Sebastian, I’ll tell you honestly.
You will be upgrading that spindle one way or other. If it’s not today, you will do it when it’s down death soon. Go ahead order Dewalt and mount for it. All these symptoms will go away. Also start considering stiffing X rails option as well. Until you finish upgrading your machine, don’t expect good result. Sooner you do it, better option for you. Don’t waste time and material.

Yeah, I was reading about the issues with the stock spindle on the forum, so I already was planning to get a better spindle.
Until than I’ll try to carve my body out of basswood, which as a much softer wood.

Thanks for the suggestion with the x rails, I’ll consider that as well. And of course thank you all for the great help

Hey @Sebastian, did you every get this sorted? I’m having similar issues although I’ve already upgraded to the Makita RT0700C. Basically everything thing you’ve explained that you’ve done I have also done. I have no play, belts are well tensioned and wheels are properly adjusted. I guess my difference is I get slight ridges on all sides of a square. Just curious if you found something that works for you.

Hi @Rusty, no not yet, I still have to upgrade my spindle. But if I find anything out, I’ll post it to this thread.

Sounds great, I’m kind of documenting my process of upgrading my spindle (see below). I’m having a lot of the same issues as you, hopefully we can get it sorted!

Quick Update, changed out the bit to a straight 2 flute and the edge has improved. The ridges are still there, just not as pronounced. I upped the current a bit, but now we are really encroaching on that max mark, pot is at about 1 o'clock position on both x and y.