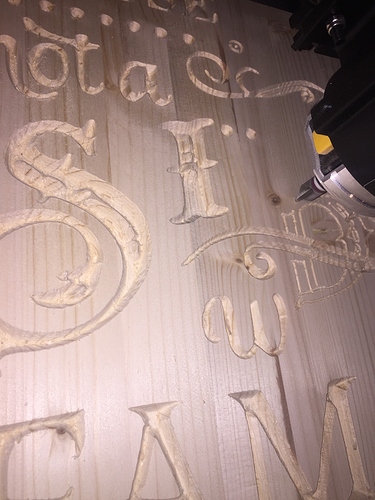 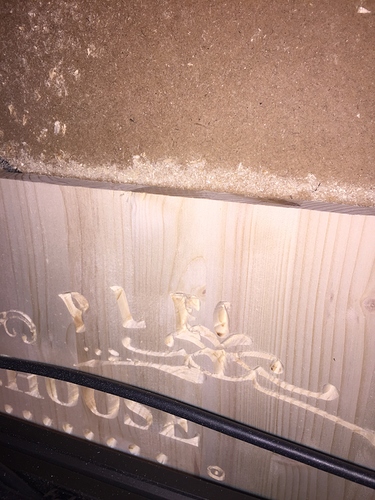 That typically indicates lost steps, which usually means your cut settings are too aggressive for the material. Try reducing your feed rate and/or depth per pass.

Thanks for the reply I’ll try that

Could be pots aren’t adjusted correctly.

Could be a loose pulley (misread the problem…Z shouldn’t play into this).

Steps were lost (symptom) but actual cause is harder to guess because it could come from any or a combination of any reason suggested by the previous posters.

Could be mechanical (something is binding or is loose, or cut rates are too aggressive)
Could be electrical (undersized motors / inproper current setting)
Could be GRBL parameters (rapid rates or acceleration settings too high for instance)

Since your router “dropped” half a line => something not right with the Y axis or the arrangement of the Y-axis.
If it just suddenly “dropped” in one go without touching the material => steps were lost during rapids,
If it drifted while carving => something is binding or is loose, or cut rates are too aggressive.

Is there more to the original design above the P L E…? Should that decorative fleur-de-lis element be below those letters like that, or above? Which carved first, the letters or the fleur-de-lis?

All the cuts look clean and everything looks like it’s cutting as it should be except for the shift halfway through. I would guess your design is positioned beyond the operational boundaries of your XCarve, and when the machine tried to navigate to the areas it couldn’t reach, you lost steps on that ‘upward’ (backward) motion, and then everything carved after that motion would have carved slightly lower than it should have.

Yeah, that suggests to me that you were trying to carve the fleur-de-lis decorative flourish outside of the machine’s reach. Everything after that action would be shifted down by the amount that the machine couldn’t travel up. Position your material more to the front of your machine so you can start ‘lower’.

Ok thank you for the help

Another possibility is that the bit “slipped” out of the collet. I’ve had that happen to me twice. Since my collet is fairly new, it may be that the bit is somewhat undersize. Also make sure the bit is not greasy or oily as sometimes new bits come pre-greased to prevent rusting.