I’ve had my X Carve for a few weeks now and there is one issue on Easel Pro I’m having a problem with.
The detail bit portion is a little confusing to me. (See attached images for a reference)
I don’t understand why the 1/32 detail bit will not cut the design fully, but the 60° V bit will.
The 1/32 is smaller in width than the lines its cutting, but according to the simulation, it seems to only cut parts of the lines. 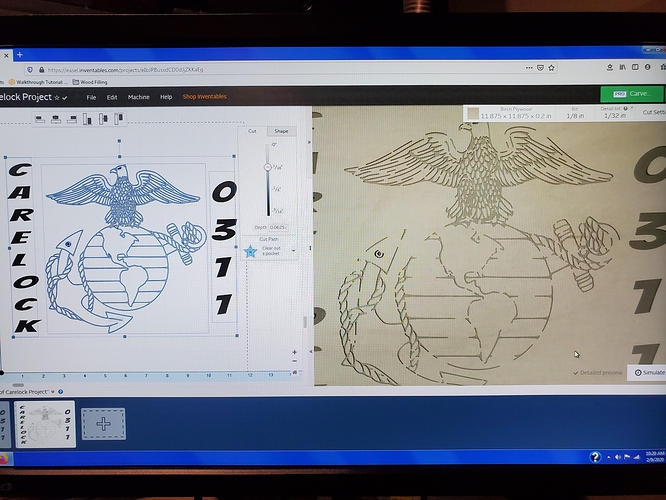 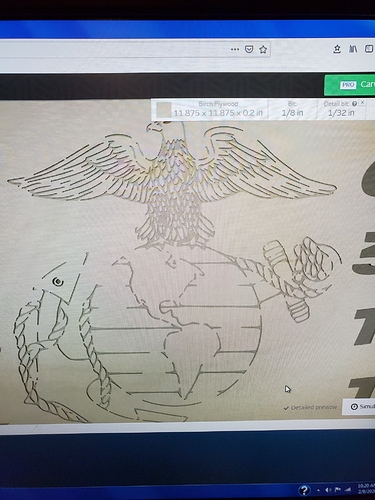 If the simulation shows it will not cut it the lines must be smaller then what the bit will cut. The v bit will only cut the width of any line so no matter how thin or thick it will cut the line. A thin line may not be near as deep but it should cut it.

Then what size bit would be a step down? I don’t always want to use a V bit and get the “3D” type look to my carvings. But also, I know for a fact that the 1/32 has a small width than the line it is cutting. I don’t want to use a 1/64 because that would take 8 hours to cut anything.

I could use a 30* V bit to reduce the 3d look while also cutting more material faster. But unsure what cut settings to apply for that.

A vbit would be your best bet. I would go with a vbit any day then a 1/32" they break to easy.

I agree with @WayneHall use a vbit.

A vbit would be your best bet. I would go with a vbit any day then a 1/32" they break to easy.

Is it normal for the 30* V bit to have an estimated cut time of 3.5 hours on a piece like that?

Could be. I would use the vbit on everything but your letters and numbers on the sides and use maybe a 1/8" bit to carve them out. There is a lot to cut out with a vbit on the numbers and letters and i think you will save a lot of time doing it with 2 bits.

Sounds good.
This is the first attempt using a 1/8 for the roughing and the 60* vbit for the detail pass.
Not a fan of how much material was lost in the feathers of the eagle. Hopefully the 30* wont be as bad.
Or should I reduce the depth of the overall cut? 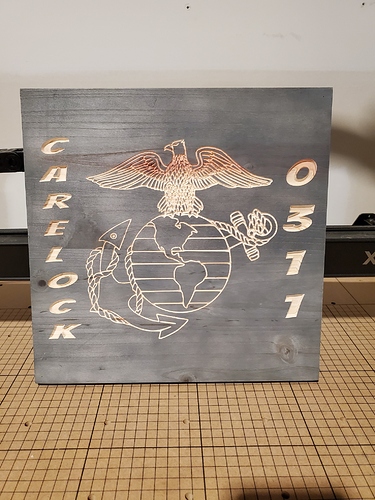 Not sure the depth will help you any with the vbit but i could be wrong. It still is going to clear out all the way to the lines. Maybe someone else will know better then me. Looks pretty good though.

Thank you Wayne. I appreciate all of your help!!

You could go a little less deep on the carve , the 30 degree can give you a thinner line as well.

I also have this same problem in several projects I have created. A 1/16 or 1/32 inch bit will not cut the entire design even though the finished designs have lines that a 1/8" bit will easily slide thru all the cuts.
John Hatch

I’m glad I’m not the only one with this strange issue. I could set it to a 1/64th bit and it still would simulate that it cannot cut the lines when I know the lines are 3-4 times wider than the bit.

I don’t have anything helpful to add other than I made a post similar to this a few weeks back. I’ve also been perplexed with the tolerances by which Easel won’t carve a line with similarly wide bits. An example would to draw a 1/8" line. Select a 1/8" bit. Be amazed when Easel’s preview shows that the 1/8" bit is too big to carve that line and therefore it isn’t shown in the preview! It’s very strange, and adds time to a carve. I remember some time last year that I was trying to carve a simple 1/8" line using a 1/8" bit. I can’t remember what the exact width above 0.125 inches was before Easel would finally preview that the 1/8" bit could carve the line, but then it proceeded to carve that line in TWO PASSES because OBVIOUSLY the line was wider than 1/8"! I really don’t understand it… very bizarre. If I wanted to carve two passes I would have intentionally made a wider line.

All,
I was just looking at one of my projects that wouldn’t carve with a 1/16th or 1/8th bit and just realised something. It’s not the overall line width that is causing the problem, it’s all in the corners and points!. If you carve a straight 1/8th in line that has SQUARE, FLAT ends, then it will require a 1/32nd bit to carve it in order to make the ends of th lines square. I’m assuming that if you carved a straight 1/8th line with rounded ends with the radius of the 1/8th bit it should carve fine.