I’m using straight cut 1/8th inch for rough cut, and 1/16th for detail, but the depth of the detail cut consistently (on five different cuts) does not reach the right depth creating an undesired bevel. Initially, I suspected issues related to the Z axis due to bit changes, but I’m diligently using a Z-probe, so I’m looking for other possible causes. This image shows the result on a test piece of plywood where the fraying and color variation is expected. A bevel can be seen on all cuts (stars, windows, outer object shape) in this image. Any help is appreciated. 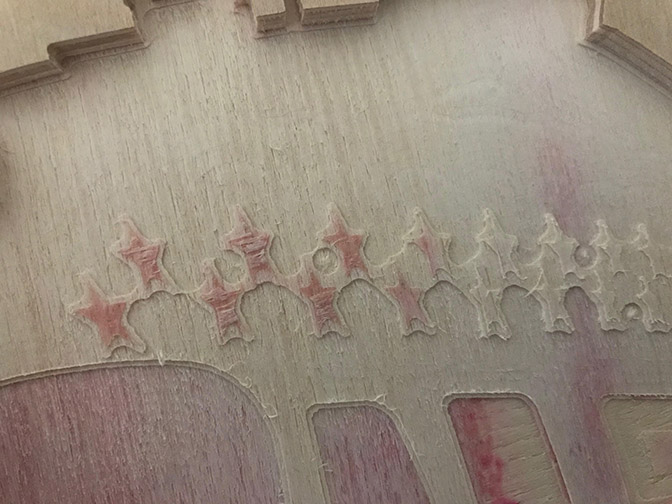 I continually have the same problem when using the Z probe. I think it’s combined error between having the correct thickness entered for the touch plate, probing the touch plate (and bit) in the same location between passes, and not having anything (i.e. dirt, sawdust) between the touch plate and your material.

Try setting Z = 0 between passes “manually” (you may have to export your G-code to another sender for this - last I knew Easel wouldn’t let you retain your previous X/Y = 0 and manually set Z = 0). Make sure you’re doing so at the exact same position on your material between passes.

Like cg49me suggested. Split your passes into separate files and zero in between.

Easel accept the command g92 z0 which set the current Z position as new Z0. It is not maintained between power OFF/ON IIRC.